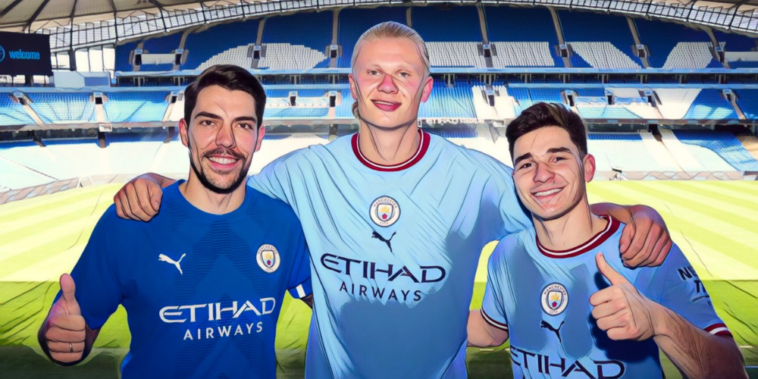 Richard Dunne has hailed Manchester City’s business in the transfer window and has backed his former side to retain the Premier League title this season.

City will begin the campaign as favourites following a period of domination in the Premier League, with the defending champions in pursuit of a third consecutive league title and fifth in just six seasons.

Pep Guardiola has strengthened his squad with a series of impressive arrivals this summer, most notably the signing of Erling Haaland from Borussia Dortmund.

Kalvin Phillips, Julian Alvarez and Stefan Ortega will also improve the strength and depth of City’s squad, but it is the capture of Haaland – who scored 86 goals in just 89 appearances during his two-and-a-half seasons at Dortmund – that has caused most excitement at the Etihad.

Former City captain Dunne, who made 352 appearances for the club, has hailed the work of Guardiola in the summer window.

“Kalvin Phillips for £42m is a great price. Julian Alvarez reminds me of Craig Bellamy, he’s fast and works really hard. With those players they’ve replaced the likes of (Gabriel) Jesus, (Oleksandr) Zinchenko and (Raheem) Sterling.”

Dunne believes the arrival of Haaland will add a new dimension to City’s forward line and has backed his former side to come out on top again this season.

Liverpool finished as narrow runners-up last season and are expected to pose the strongest challenge to City, while the Reds have bolstered their own attacking options with the £64m arrival of Darwin Nunez from Benfica.

However, Dunne is confident that City’s improved firepower can lead to the title being retained at the Etihad this season.

“(Phil) Foden is an unbelievable footballer. Jack Grealish is going to improve this year, and then you add in Erling Haaland. I don’t think Nunez is going to have the same impact as Haaland.”

Dunne also believes that Guardiola’s presence gives City the edge over their Merseyside rivals, insisting the Spaniard knows ‘how to get over the line’ when it comes to winning titles.

“Pep just knows how to get over the line. He manages the players and keeps the squad happy, his win record is insane. Everyone who works for him, loves him. He’s changed how young coaches think about football.

City will begin their Premier League title defence with a trip to face West Ham at the London Stadium on August 7.