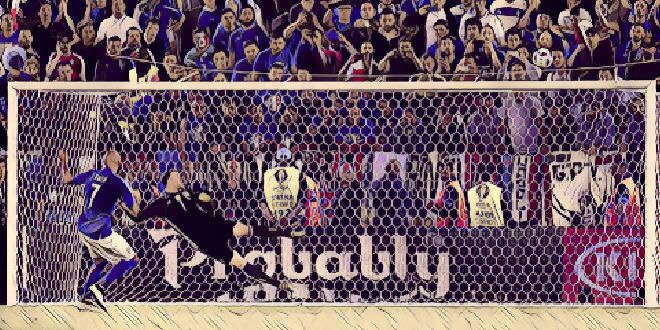 There’s a lot to love about football and we’ve covered plenty of the great moments from the beautiful game. Great goals, great games even great quotes, but now it’s time to look at some of the worst bits.

No not the corruption, greed, disenfranchising and pricing out of fans, not diving, not uncaring owners driving clubs in to the ground, not fixtures being moved around for tv, not big clubs stockpiling young talent, not FIFA, not racism or UEFA’s failure to do anything about it, not.. oh you know what? This piece isn’t actually about the worst bits really, it’s just good footballers being bad at football. Enjoy!

Pat Nevin was and remains a fans favourite at Stamford Bridge, he was twice voted Chelsea Player of the year while at the club between 1983-88. To be fair if he could still be loved after a penalty like this then he must have been a very special player!

United fans of a certain age will easily remember Cantona sticking away penalty after penalty. They were always struck with such confidence and even though the majority of them found their way to the bottom left corner, the ‘keepers always seemed to go the wrong way. There was very little messing about with these penalties, no stop-start run up, just step up and score. Maybe this next clip shows why the King adopted this no nonsense approach.

Peter “not so” Devine

You know on a Sunday when you’re playing 5-a-side and you miss an absolute sitter or get done with a nutmeg by someone much younger than you? You know the way you might, and I mean you, not me obviously, pull up and fake an injury because that’s obviously better than having people think you’re a complete idiot? Step forward Peter Devine.

Who are we to laugh at Totti? We are mere mortals when he is a God among footballing men. That’s why we didn’t laugh when we watched this. Nope. Not even once.

Ok, it was just a pre-season friendly tournament but seriously, is this worst penalty ever? From a player you would have bet your house on to hit the net. Hang on, Italian, Juventus, dodgy penalty miss…. No, sorry. despite all of that, even if you were trying to miss you’d do better than this lame effort.