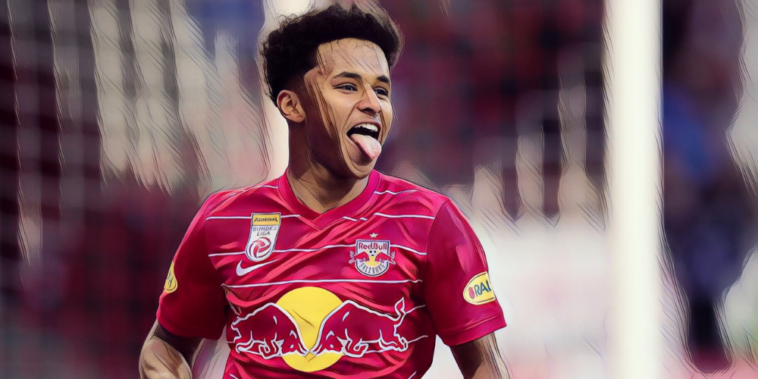 Football Manager 2022 has reached its long-awaited release date and avid fans of the game will be keen to delve in and start their new saves.

As ever, the key to success in FM2022 will be planning for the long term and signing players brimming with potential is the quickest route to sustained success. With the likes of Erling Haaland, Pedri and Jude Bellingham are already household names, we’ve looked at some lesser-known talents who could emerge as genuine stars of the future.

Following the release of Football Manager 2022 we’ve picked out 10 wonderkids that managers should consider signing, ranging from shot-stopping starlets to potential goalscoring greats of the future.

Here are 10 Football Manager 2022 wonderkids to build your team around.

Vandevoordt has been a Football Manager wonderkid on the past couple of editions, with the goalkeeper remaining one of the best signings for any manager looking for a long-term solution at number one.

The Genk goalkeeper has solid stats across the board including 15 for reflexes and kicking, though those attributes will blossom with regular exposure to first-team football and experience.

Vandervoordt has no obvious weaknesses and is amongst the best goalkeeping prospect in FM 2022, whilst Porto’s Diogo Costa and Benfica’s Andre Gomes make fine alternatives.

Brazil is so often a hot-bed for Football Manager wonderkids and 2022 is no different, with Santos centre-back Kaiky amongst the best value defenders in the game.

The 17-year-old will take time to develop but can mature into a fine ball-playing defender for teams, with strong stats for passing, vision and heading.

His initial transfer valuation is between 350K-£3.5m, making him a potential bargain for those willing to take a patient approach on the road to success.

Prising wonderkids from Europe’s elite can prove notoriously difficult, but with the wealth of competition for places at Bayern Munich, signing Tanguy Nianzou can be achieved for sides possessing significant funds to spend.

The teenager’s 66k p/w wages could prove problematic for sides outside the financial elite, though any who can persuade Bayern to part with Nianzou will be signing a player who can form the bedrock of their team for seasons to come.

The Frenchman’s speed, strength and jumping reach make Nianzou a physical beast, whilst he has the technical attributes to thrive in a possession-dominant side.

Very much the modern full-back, Netz is a defender who will charge up and down the left flank for his side, possessing strong starting stats for acceleration (15), pace (15), stamina (14) and determination (18).

His technical attributes can be developed to make the German a well-rounded defensive asset, equally capable of influencing proceedings at both ends of the pitch.

The teenager’s initial valuation of £13m-£19.5m will rocket as he improves across your save and with full-backs as influential as ever in modern football, Netz could be a shrewd signing for the longer term.

For those seeking a more attainable alternative, Hamburg’s Josha Vagnoman (20) can be found in Germany’s second tier and has the capability to shine in either full-back position.

Ajax have a long history of producing talented and intelligent footballers, with Devyne Rensch emerging as one of the Dutch side’s best wonderkids on Football Manager 2022.

Rensch can play in any position across the backline and even further forward into midfield, with the 18-year-old’s versatility sure to appeal to managers looking for adaptability in their squads.

Rensch has solid base stats for work-rate (14), team work (15), determination (16) and passing (14), whilst his multi-functional nature makes the teenager an intriguing project for managers with a desire for developing youngsters.

Seeking midfield flexibility? Ivan Ilić could be the perfect solution with the Verona midfielder capable of fulfilling a variety of roles in the engine room, whether stationed in front of the backline or operating behind your side’s forwards.

The 20-year-old has strong starting stats for key attributes and is suited to a playmaking role, with Ilić passing (14), technique (15), vision (14) and teamwork (16) stats ensuring it will not take long before he is ready to reguarly influence a top-flight side.

Valued at between £13.5m-£20m, he could prove the lynchpin of your midfield for the next decade.

Yari Verschaeren is a name that should be at the forefront of manager’s thoughts as your save begins, the midfielder approaching the end of his contract at Anderlecht and soon available as a bargain Bosman purchase.

Already talented enough to make an impression at top-flight sides, he can develop into a leading name with the right development and exposure to first-team football.

Already well-rounded with stats in excess of 14 for passing, technique, vision, work rate, flair and agility, he is one to watch and you will need to move quickly to secure his signature.

Red Bull Salzburg have been a production line of talented names in recent seasons with the likes of Sadio Mane, Naby Keita, Erling Haaland and Dominik Szoboszlai having flourished at the serial Austrian champions.

It’s worth making a trip to scout Salzburg in the early stages of your FM22 save, with the Austrians possessing a host of talented youngsters headlined by forward Karim Adeyemi.

The 19-year-old has made a huge impression on this season’s Champions League and can be picked up for a relatively modest fee at the start of your save, his starting value of between £11.5m-£17m fine value for a forward with lightening pace (17 speed, 16 acceleration) and huge upside.

Holding midfielder Nicolas Seiwald (20) and centre-back Oumar Solet (21) are other Salzburg starlets who should be on your radar.

If you are in search of a more physical presence to lead your line, Pisa’s towering target-man Lorenzo Lucca should be high on your transfer wish-list.

The 6ft 7in forward possesses a jumping reach of (17) and heading of (17) as your save begins, whilst his stats for finishing (15) and composure (13) can both develop to an elite level.

Whether he’s the focal point for your side or a threatening plan B off the bench, securing his signing (initial value £240K-£5.6m) will strike fear into defences.

If there’s one wonderkid to sign on Football Manager 2022, it’s probably Youssoufa Moukoko.

Added to last year’s game following his breakthrough at Borussia Dortmund, the 16-year-old begins the latest edition with frightening statistics for a forward so young.

Already Moukoko rates 15+ for dribbling, finishing, technique, pace, acceleration and agility, with the teenager able to make an impression immediately and develop into the world’s best centre-forward.

He won’t come cheap, however, and starts your save valued at a minimum of £42m, but for any elite side in search of firepower, Moukoko is undoubtedly the talent to target.