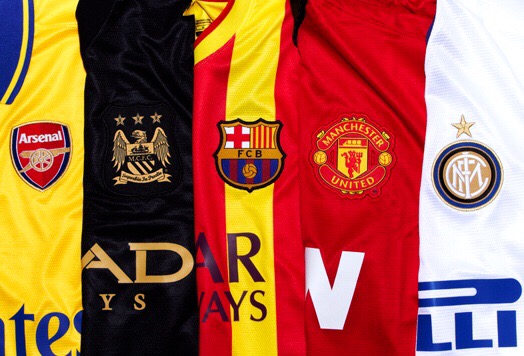 Every summer, Football fans around the globe clamour to get their teams latest new kits. We take a look at the success rates of the manufacturers themselves.

It’s big business. Each manufacturer ploughs hundreds of millions of Pounds every year to earn the right to be able to produce the kits for every club around the world. The bigger clubs the bigger the contract.

Manchester United recently switched from Nike to Adidas in a deal worth an eye watering £750million over ten years. Meanwhile, Premier League table toppers Chelsea will switch their manufacturer in the opposite direction which will see the Londoners bank a phenomenal £900million over the next 15 years.

It’s a huge money spinner for both the manufacturer and the clubs alike, and the better the club does, the more shirts it will sell around the globe.

But which manufacturers have the most success?

Well it won’t come as a surprise that the majority of succesful teams have their kits produced by Nike or Adidas.

When you compare the top five European Leagues, plus the two European competitions over the last ten years, it is Nike that come out on top. The Americans have created 51.4% of all of the successful kits, with Adidas creating 28.5%. A staggering market share of just short of 80%!

It is only in Germany’s Bundesliga where Nike do not have any kind of domination. Wolfsburgs title sucess 2008/9 was in fact the only time during the period that Nike have produced a title winning kit in Germany.

However in the Premier League, La Liga, Serie A and Ligue 1, Nike generally rule.

In the Champions League too, every single winner for the last 10 years have had their kit produced one of the big two sportswear makers. That fact is no surprise considering Barcelona and Real Madrid’s domination of the competition. 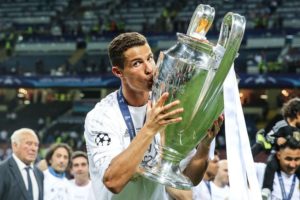 However there are plenty of other kit makers out there.

Best of the Rest

The third largest kit success rate is for both Puma and Umbro. The two manufacturers have seen their kits worn for 5.7% of title success’s, thanks to the likes of Leicester City and Manchester City’s recent success. (Man City have recently switched to Nike)

The remaining 8.4% is split between four other manufacturers. Kappa produced the shirts for Borussia Dortmunds two Bundesliga titles back in 2010/11 and 2011/12.

The remaining three manufacturers however are very interesting indeed. They all were responsible for producing the kits for Sevilla’s recent Europa League domination.

Joma produced the kit back in 2006/7. Warrior produced the two successive kits for their 2013/14 and 2014/15 campaigns before New Balance were the creators for their triumph last season. 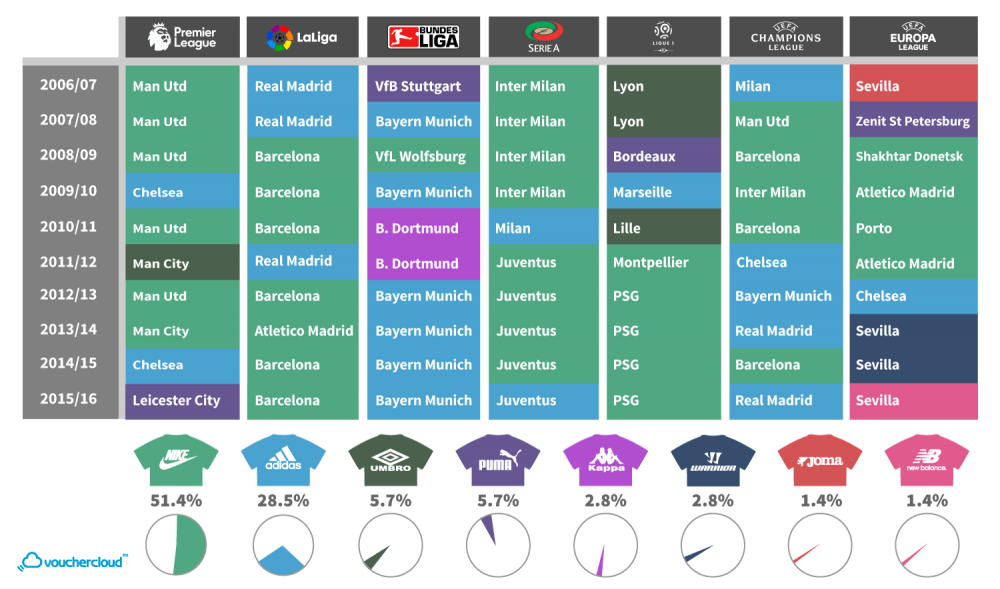 We hope you found this article interesting. The data and graphics were produced by Darren Douglas at vouchercloud.