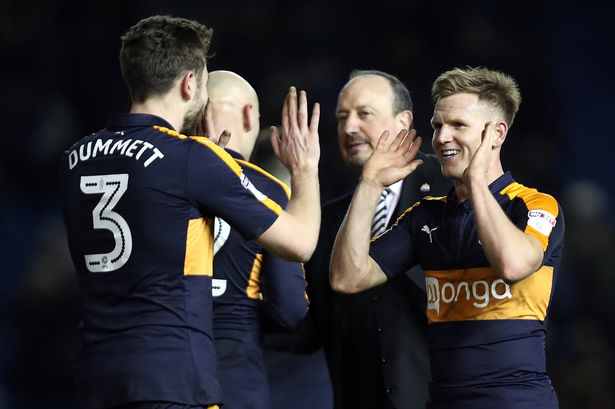 Like they have done on many occasions this campaign, Newcastle left it very late to steal three points from their promotion rivals, Brighton and Hove Albion.

The Magpies travelled to the Amex with great confidence. They have the best away record in the league, but the game would not be easy, coming up against the team with the best home record.

Despite Brighton opening the scoring with a questionable penalty, Newcastle dominated the game and finally were able to grab two late goals to grab a late win.

Two changes were made for the away side; Mo Diame replaced Ayoze Perez. Yoan Gouffran started up top, a position in which he had only played once all season. As for Chris Hughton’s men, they named an unchanged line-up hoping for a similar outcome to their 3-0 win against Reading last time out.

Brighton started the game with the most hunger; they really wanted to come out with a win from this game. They conjured up many chances in the first five minutes which unsettled the back four and goalkeeper of Newcastle.

Their first notable chance was when captain, Bruno latched onto a half clearance from Jamaal Lascelles and struck a volley which moved right in front of Karl Darlow’s eyes. The goalkeeper was quick to react and parried the ball out of any reach for the Brighton players.

Then, an immensely creative and clever set-piece from The Seagulls provided another good opportunity. Two players stood over the dead ball with one on the end of the opposition wall. One player stood over the ball rolled it to the other and instead of taking a shot they chipped the ball over to the player in the wall (Sam Baldock). Newcastle were left flat-footed and Sam Baldock had a one on one. However the in form striker could not beat Darlow at his near post.

One minute later came the moment of controversy. Brighton were given a penalty by Huddersfield supporter Bobby Madley for an apparent foul on Glenn Murray by Ciaran Clark. It was a very harsh call as it appeared that Murray fell to the floor very easily.

Even the Brighton players were surprised when the decision went their way as not one of them claimed for a penalty.

After a brief pause, Murray stepped up to the spot and sent Karl Darlow the wrong way with a placed effort in the bottom left. It looked the Geordies had a mountain to climb having failing to come back from being a goal down to win so far in the season.

However after the opener, Newcastle began to push. Matt Ritchie’s cross nearly sneaked in at the back post when it beat David Stockdale. It unluckily went wide of the target and Newcastle’s search for a goal continued.

It was on the stroke of half-time when the score really should have been tied.

DeAndre Yedlin bombed down the right flank and crossed the ball low into unmarked Christian Atsu in the box. Atsu took one touch and released a shot but it was placed fired straight into the chest of David Stockdale.

It was in the second half where Newcastle really upped their game.

Daryl Murphy was introduced to the game and was immediately presented with a great chance to level the scores. Matt Ritchie picked out the Republic of Ireland international from the corner. Unfortunately his header went straight into the gloves of Stockdale.

Next came one of the most comical and lucky moment the season. A David Stockdale punched clearance saw the ball drop to Christian Atsu on the edge of the box. The Ghanaian scuffed his effort which struck the heel of teammate Mo Diame. The ball looped over the defence and into the net which left viewers of the match flabbergasted. It looked like the Toon Army were not just going to settle for a draw.

Ayoze Perez came onto to replace Yoan Gouffran and bagged the winner with his first contribution. Matt Ritchie’s fantastic diagonal pass picked out Christian Atsu, who pulled the ball back to Perez in the box. The Spaniard made no mistake in finishing a great move.

Joy filled the away end when Bobby Madley blew his whistle for full time. A great comeback for Rafael Benitez and Newcastle who were now eight points clear of Huddersfield who were outside the automatic promotion places. There was not any time to celebrate as they faced another tough away challenge. Huddersfield away could be a season defining moment for both teams seasons.