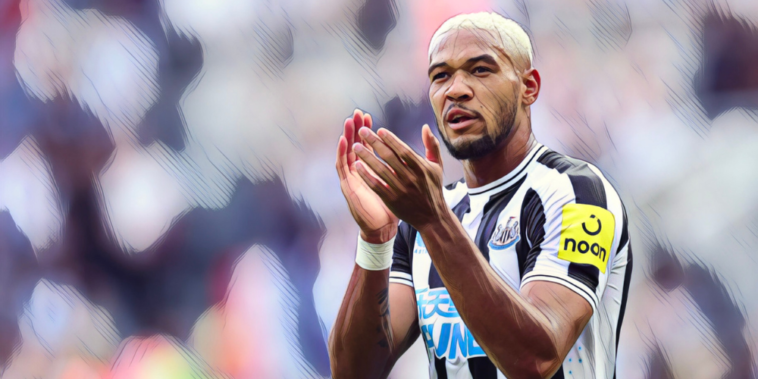 Time is running out for players to force their way into World Cup plans for Qatar, with the first-ever mid-season tournament fast approaching.

Given the unusual timing of the tournament in 2022 however, a fine run of form to start the campaign could propel Premier League players into the thoughts of their international sides.

Naming an uncapped name in your final World Cups squad could represent a risk, but these five players are pushing hard for recognition and will hope to force their way in over the coming months.

Not so long ago calls for Joelinton to break into the Brazil squad would have been laughed off, with the forward having struggled under a weight of goalscoring expectations at Newcastle.

Joelinton was labelled an expensive misfit, having failed to find the net with regularity after arriving in a £40m deal from Hoffenheim.

Last season, however, began one of the most remarkable transformation tales in recent memory, with Eddie Howe bringing the best from the Brazilian in a deeper role.

Joelinton’s transformation from goal-shy forward to midfield bull has made international ambitions increasingly realistic. Last season he was one of just two midfielders in the Premier League – alongside Declan Rice – to reach 30+ for tackles won, interceptions, clearances, completed take-ons and aerial duels won.

The 26-year-old’s box-to-box presence has added a new dimension to the Newcastle side, with Joelinton crowned as the Magpies’ Player of the Season in 2021/22. It came as little surprise to those around him however, with teammate Sean Longstaff having fought his corner following an outstanding performance in December.

“I can honestly say every day in training he’s the best player,” he told Sky Sports. “If he’s on your team, you win. If you get Joe on your team, you’re buzzing. Ask anyone at the club, everyone rates him so highly. Like I said, some of the noise from outside, I think, is really disrespectful. If you actually watch us enough and know what you’re watching, you realise how good he is.”

Joelinton has now set his sights on representing the Selecao and said earlier this month that the opportunity to wear the famous yellow shirt would be a ‘dream’. On current form, he can’t be far from an international call.

Toney took time to find his feet in the season’s opening months, but found his form during the second half of the campaign to score eight goals across the Bees’ final 14 fixtures.

The 26-year-old has began the 2022/23 campaign in fine form, opening his account against Leicester in week one before a brilliant performance in Brentford’s 4-0 thrashing of Manchester United.

Toney tormented the Red Devils with a complete centre-forward performance, one which saw him lead the game for aerial duels won (4), chances created (4), and provide two assists.

Toney also set a new personal best for distance covered in a Premier League game (10.6km) as he worked tirelessly leading the line and Gareth Southgate will have been keeping notes on a forward who is confident in his ability to compete at the highest level.

It appears an open race to join Harry Kane among England’s centre-forward options in Qatar, with Tammy Abraham perhaps the leading candidate as Dominic Calvert-Lewin struggles for fitness. Ollie Watkins, Patrick Bamford and Callum Wilson are also in contention, but Toney will hope to soon enter the conversation.

France have arguably the best depth in world football right now with Les Bleus boasting talent right across the pitch.

Didier Deschamps’ side will travel to Qatar as world champions and will be hoping to defend their crown, though will do so with a squad that has undergone changes since Russia four years ago.

The likes of Samuel Umtiti, Adil Rami, Djibril Sidibé and Benjamin Mendy are no longer in contention for defensive roles, while Raphael Varane’s struggle for form and fitness at Manchester United has placed doubts over his inclusion.

A new breed of defenders has made the step into Deschamps’ squad of late, with the likes of Ibrahima Konaté, Dayot Upamecano, Jules Kounde and William Saliba having made their debuts since the nation’s World Cup win.

One man who will be hoping to join those ranks is Wesley Fofana. The 21-year-old had an excellent debut season at Leicester in 2020/21, earning the club’s Player of the Season accolade. A horror injury sustained in pre-season ruled him our for the majority of last season, but he has since returned to the side.

Chelsea have been linked with a world-record bid for Fofana, an indication of how highly-rated the centre-back is. Having earned five caps for the u21 side, he will hope an impressive start to the season can lead to senior honours.

There’s a growing contingent of Brazilians at Arsenal, with the three Gabriels all playing a key part in the Gunners’ revival under Mikel Arteta.

Gabriel Jesus joined namesakes Martinelli and Magalhaes in north London this summer, but while the former duo are full internationals the latter has yet to receive a chance with the senior side.

Last season the centre-back was a cornerstone of the Gunners side, making his presence felt at both ends of the pitch. The 24-year-old scored five goals in 35 league appearances and played more minutes than any other player.

Magalhaes also led his teammates for tackles (50), clearances (109), headed shots (16) and completed passes (1,824), while the natural left-footer brought balance to the Arsenal backline.

The defender admits he has made strides forward since arriving in England from Lille in 2020, believing the demands of the Premier League have improved his game.

“I think the Premier League is definitely one of the toughest leagues to play in and I would say I have definitely improved a lot since arriving here,” he told Sky Sports. “That goes for my passing, my heading, and various other aspects of my game.”

Competition is fierce for a place in Brazil’s plans, but after twice being an unused call-up for the national side, he will hope to earn a long-awaited chance with the Selecao in Qatar.

Henry has shone for Brentford since joining the club in a £1.5m deal from Walsall in 2016, forming part of the team that earned promotion to the Premier League.

Last season the 25-year-old took to top-flight football with ease, overcoming an initial slow start to be among Brentford’s best performers in the 2021/22 campaign.

Henry made 34 league appearances and scored three goals, impressing with his buccaneering brand of football from left-back. Luke Shaw’s struggle for form and Ben Chilwell’s return from a long absence has opened the door for left-backs to gatecrash England’s plans.

Chilwell failed to make a single appearance at Euro 2020 last summer, while Shaw’s performances have nosedived since a strong tournament. Last season, Henry averaged more completed take-ons, ground duels won, clearances and interceptions per 90 than Shaw in the Premier League.