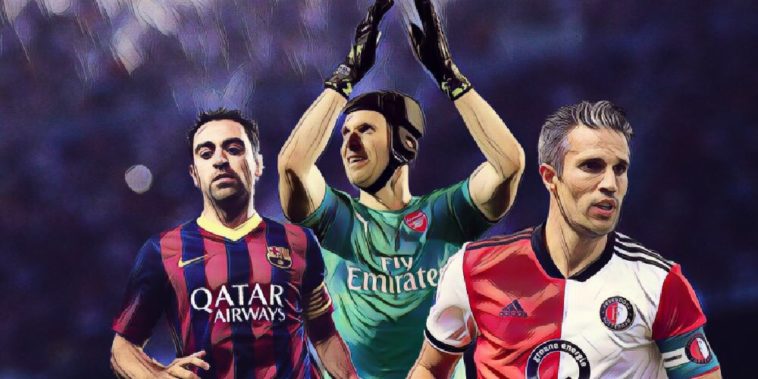 There comes a time when every player has to close the curtain on their career, when the legs just don’t work like they used to before.

Some decide to retire at the very top, whilst others drop down the leagues as they bid to continue playing as long as physically possible.

They say all good things must come to an end, so with that in mind we’ve decided to feature five players who will be waving their footballing farewell’s and hanging up the boots this summer…

The player who made arguably the greatest club side in history tick. Xavi was a phenomenal midfielder, the embodiment of the tiki-taka style of play and the heartbeat around which the great Barcelona and Spanish sides were built.

Visions of the Barcelona midfield toying with Manchester United in the 2011 Champions League final come back, with Xavi the fulcrum of the side.

On the international stage, he was central to the Spain team which shed their ‘underachievers’ tag to win an unprecedented three major trophies in succession, including the 2010 World Cup.

He left Barcelona in 2015, having played a club-record 767 games, to wind-down his career in Qatar with Al-Sadd. He continued his trophy-laden career in the Middle East, winning the Qatar Cup in 2017 and the Qatar Stars League this season.

Xavi retires as the second-most decorated player in Spanish football history, behind only former teammate Andres Iniesta, and arguably as their greatest ever player.

See Also: 10 of the best quotes about Barcelona legend Xavi

The original ‘Mr Versatile’, O’Shea enjoyed a decorated career having come through the academy at Manchester United.

His cult-hero status at Old Trafford was earned early, with an outrageous nutmeg on Ballon D’or winner and Real Madrid star Luis Figo as a 21-year-old in a Champions League quarter-final clash.

The Irishman delivered several big moments during a 12-year stay at United, including morphing into Eric Cantona to produce an exquisite chip in a famous win at Arsenal. A stoppage-time winner at Anfield was another highlight for O’Shea, who won five league titles amongst 14 trophies before leaving for Sunderland.

On the international stage he accumulated 118 caps for the Republic of Ireland, third only to Robbie Keane and Shay Given. He also featured in two European Championships, being a key player in both the 2012 and 2016 tournaments.

Having spent seven seasons at Sunderland, O’Shea joined Championship side Reading last summer, before announcing his retirement at the end of the season.

God bless John O’Shea. For nutmegging Figo and scoring a goal of such artistry and nonchalance that it even left him in mild shock pic.twitter.com/34jkA0y6yT

Having accumulated the most clean sheets in Premier League history, it’s fair to say that Petr Cech had a fairly successful time in English football.

Signed by Chelsea from French side Rennes as the first Jose Mourinho era began in 2004, the Czech international enjoyed a stunning debut campaign for the club conceding just 15 goals all season as the Blues ended a 50-year wait for a league title. His 24 clean sheets that season are a record that still stands, whilst he is also a joint-record four-time winner of the Premier League’s Golden Glove.

Cech spent 11 years at Stamford Bridge, winning 13 major honours including the 2012 Champions League. He left for London rivals Arsenal in 2015, winning the fifth FA Cup of his career with Arsene Wenger’s side in 2017.

Internationally he has been crowned Czech Footballer of the Year a record nine times and earned a record 124 caps.

The veteran goalkeeper ironically played the last game of his professional career against his former club Chelsea in the Europa League final in Baku last month, but could do little as his Arsenal side were put to the sword in a 4-2 defeat.

See also: Every goalkeeper to have reached 100 clean sheets in the Premier League

A rare breed of player who seems to have improved with age, Andrea Barzagli has been a defensive pillar in a Juventus side which has displayed unprecedented dominance of Italian football.

Barzagli actually came from humble beginnings, with his early career spent at lower league clubs such as Rondinella, Pistoiese, Piacenza and Ascoli.

Following a season at Chievo he moved to Palermo, where he spent four successful seasons, and his fine form in Sicily earned him a spot in the Italy squad that won the 2006 World Cup. He soon attracted the interest of German side Wolfsburg, who signed the centre-back in 2008 where he helped them to their one and only Bundelisga title in 2009.

He moved back to Italy with Juventus in 2011, where has formed the backbone of a side which has won eight consecutive Series A titles.

Barzagli’s impact was such that Juventus chairman Andrea Agnelli dubbed the £600,000 fee to take the defender to Turn as ‘the best signing we ever made’. High praise indeed.

See Also: Grading the five most expensive transfers of the 2018 summer transfer window

A scorer of great goals and a great scorer of goals, called time on his career after a second spell at first club Feyenoord is Robin Van Persie.

Capped over 100 times by the Netherlands, Van Persie is his country’s all-time top goalscorer after netting 50 international goals.

Having come to prominence at Feyenoord, Van Persie was signed by Arsenal in 2004 as Arsene Wenger sought a long-term replacement for Dennis Bergkamp. Injury problems initially hampered his impact, but when fit the Dutchman developed into one of the Premier League’s finest players.

Van Persie scored 132 goals in 278 appearances for Arsenal, but just a solitary FA Cup success saw him seek a new challenge. He moved to rivals Manchester United in 2012, with Wenger reportedly telling Sir Alex Ferguson “he’s better than you think” at the conclusion of the deal.

Wenger was proved right, Van Persie finishing as the Premier League‘s top scorer after inspiring the club to a record 20th league title in Ferguson’s final season in charge.

He left for Fenerbache in 2015, before returning to Feyenoord in January 2018 and helping them to the Dutch Cup later that year.

He retires having twice won the Premier League’s Golden Boot, whilst also having been crowned PFA Players Player of the Year and FWA Footballer of the Year in his final season at Arsenal in 2011/12.