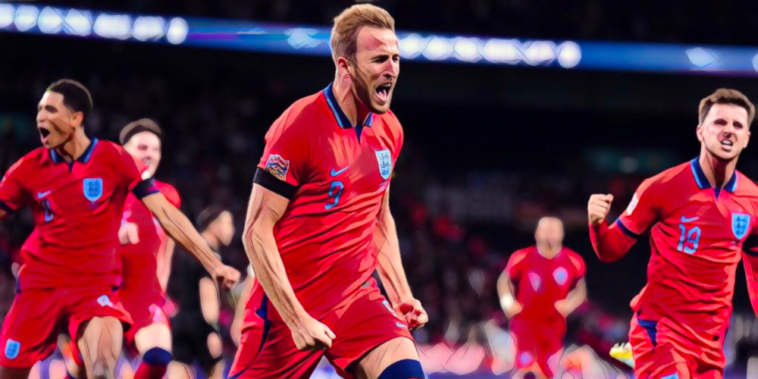 England’s preparations for the World Cup are complete, with the conclusion of the Three Lions’ Nations League campaign the final fixtures before Qatar.

Gareth Southgate’s side were beaten 1-0 in Italy in their first fixture, before an entertaining 3-3 draw with Germany at Wembley. It’s now six games without a win for England, who would have wanted to find form before heading to the Middle East this winter.

England’s run without a goal from open play extended to over 550 minutes before an entertaining second-half against Germany, as the two teams swapped six goals in a frantic finish at Wembley.

Despite that blitz of three goals in just 11 minutes, goals remain a problem for England with the Three Lions lacking reliable goalscorers. Harry Kane and Raheem Sterling have scored a combined 70 international goals, while the rest of Southgate’s squad for the Nations League games – an extended 28-man group – have just 40 between them with centre-back Harry Maguire (7) the next highest goalscorer.

They'll be in League B next year 😬 pic.twitter.com/EmCmWyQ7mp

Kane moved within two goals of Wayne Rooney’s all-time record against the Germans, but often appeared isolated across those fixtures and dropped deep in search of involvement. The 29-year-old has not scored from open play for England in his last eight appearances, since scoring back-to-back hat-tricks against Albania and San Marino in November 2021.

He also has just one goal – the winner against Denmark in the semi-final of Euro 2020 – in his last 12 international appearances against teams currently in the top 10 of FIFA’s world rankings. That statistic must change if England are to have success in Qatar, while greater help is required from the attacking options in Southgate’s squad. Phil Foden, Bukayo Saka and Jack Grealish have a combined seven goals from 62 caps.

Bellingham a certain starter for Iran

Jude Bellingham had started just six fixtures for England before September’s international break, but the teenager appears to have cemented his position in the starting side for Qatar.

There was much talk about the Borussia Dortmund midfielder pre-international break, following an impressive start to the season with the Bundesliga side which included a strong performance at Manchester City in the Champions League.

Bellingham was one of the few England players to enhance his reputation this week, after two performances which demonstrated the maturity that has defined his emergence. The 19-year-old was the bright spark in an otherwise drab display in Italy, before his performance proved the catalyst behind England’s comeback against Germany.

Not our best but a step in the right direction. Always an honour. pic.twitter.com/MkNYibhTWf

After a slow start, he grew into the game, with his dynamism driving England forward. He was involved in the first goal and won the penalty for the Three Lions’ third, while his partnership with Rice has an encouraging blend of presence and poise.

Bellingham leads the Bundesliga this season for take-ons completed (21), duels won (73) and possession won in the middle third (39) this season and his cool can be built around in the England engine room. A strong campaign in Qatar will only increase his ever-growing price-tag.

Trent Alexander-Arnold continues to polarise opinion, though the evidence from the latest international break is that Gareth Southgate has made his mind up.

Alexander-Arnold was included in the England squad, but returns to Liverpool without kicking a ball for the national side. It has been a familiar theme of his international career to date, with Southgate refusing to place his trust in the right-back.

Since his breakthrough in 2018, Trent Alexander-Arnold has played 17/58 England games.

In that time, he’s won every trophy available at Liverpool and recorded over 60 assists from RB.

He’s not in the matchday squad for England's final game before the World Cup 😳 pic.twitter.com/W9jXC3h5EZ

The 23-year-old has made just one international appearance in 2022 and featured for just 69 minutes during the woeful Nations League campaign. It was a campaign in which England looked starved of creativity and there will be question marks as to why Southgate has continually overlooked one of the Premier League’s most consistent chance creators.

It is a curious case given Southgate often lines England up in a system which appears suited to covering the gaps Alexander-Arnold naturally leaves behind, even if the Three Lions’ centre-back options – Kyle Walker aside – do not possess the athleticism of his Liverpool teammates.

Though he has started the season in indifferent form, Alexander-Arnold is indulged at Anfield and Liverpool often reap the rewards for doing so. The pros – a rate of chance creation unmatched from full-back – outweigh the cons of occasional defensive lapses in the eyes of Jurgen Klopp. Southgate, quite clearly, disagrees. It would now come as a surprise to see Alexander-Arnold included in Qatar.

Harry Maguire’s inclusion in the squad was a major talking point. However, Southgate justified his selection by suggesting the Manchester United defender had built up a bank of credit with the national side.

Maguire has been a reliable performer for England and was named in the Team of the Tournament at Euro 2020 last summer, but he has been hopelessly out of form for a period too long to ignore.

Out of favour at club level and with little chance of regaining his place in the side, Maguire’s struggles transferred to the national side during two performances which will provide Southgate with a major headache.

He looked ungainly during a shaky start in the defeat in Italy, before an error-prone performance at Wembley on Monday evening which intensified the calls for him to be dropped. Maguire was cumbersome and clumsy in bringing down Jamal Musiala for Germany’s penalty, having gifted the midfielder possession with a loose pass.

He then squandered possession high up the pitch in the build-up to the visitor’s second and Southgate’s claim that his team will be selected on form can not ring true if Maguire starts England’s World Cup opener.

The centre-back’s confidence is at a crisis point and there is little chance of him regaining form or favour at club level before November. The decision to start him in both fixtures – and overlook the likes of Fikayo Tomori for a chance – is a gamble that has backfired.

Jordan Pickford was missing from the England squad through injury, though he is expected to return from his thigh issue in the next fortnight and regain his match sharpness ahead of the World Cup.

England’s number one is in no danger of losing that status, after Nick Pope failed his audition with the national side. Pope’s errors followed Aaron Ramsdale’s unconvincing performances in June’s Nations League games and underlined why Southgate has long placed his faith in Pickford.

Turns out the best thing Jordan Pickford could do to answer those questioning his place as England’s #1 wasn’t to help the side to a World Cup semi-final, Euros final, be consistently excellent, win save of the season or start this campaign in superb form. It was to… get injured

Pope’s distribution was poor and he looked awkward with the ball at his feet, kicking one ball out of play and another straight to Jamal Musiala. He will have nightmares about Germany’s third goal as he spilt a routine stop into the path of Kai Havertz, as his confidence dipped following mistakes with his kicking.

Pickford has his fair share of critics in the Premier League, but he has rarely faltered for England and has the inner confidence to handle the pressure of a major tournament.