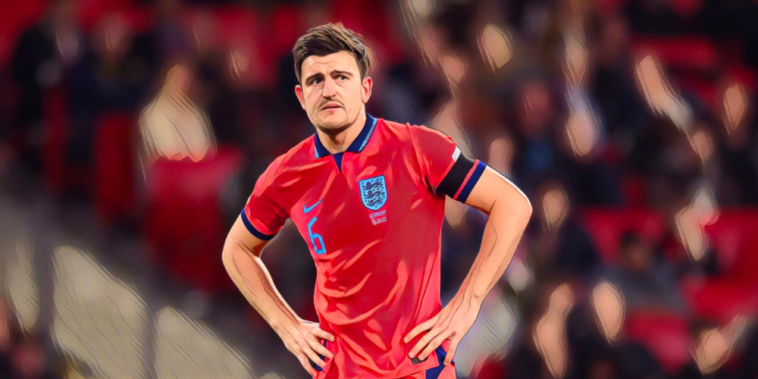 Gareth Southgate has defended his decision to select Harry Maguire for England’s Nations League games with Italy and Germany.

Maguire was included in the England squad despite losing his place at Manchester United, with the centre-back having featured just twice in the Premier League this season following an extended period of poor performances.

The 29-year-old’s selection has been criticised and the scrutiny has increased on both Southgate and the defender after Maguire’s mistakes in the 3-3 draw with Germany on Monday evening.

Maguire conceded a penalty for a clumsy challenge on Jamal Musiala and also squandered possession in the build-up to Germany’s second goal. Southgate, however, has issued a defence of the defender and says he must back England’s experienced players.

“That’s always going to be a challenge, especially regarding how much football they’ve had,” Southgate said following the draw at Wembley, as per Sky Sports.

“I know everyone will focus on Harry, but there were some very important moments Harry delivered during the two matches.

“Luke was another example of someone who is an outstanding footballer, so what do we do? Not pick Luke Shaw because he’s not playing enough football or do we pick a player who can do what you saw tonight?

“That’s always going to raise debate, but I think in these moments we’ve got to back our best and our most experienced players, unless we’re in a situation where it’s almost untenable and impossible to pick them.”

Shaw – who impressed against Germany despite criticism over his own inclusion – also defended Maguire and believes his teammate takes an unfair amount of criticism.

“He’s taken a lot of stick – probably more than I’ve ever seen before in football.

“He never hides away, he’s always there. You can have people who can hide away and not want to be in the spotlight. He keeps putting himself in the spotlight, it shows the strength and character he’s got.

“Everybody knows he’s an unbelievable player. At the moment the confidence might not be there because it could feel like the whole world is against him.

“It’s tough for him, but us as players and staff are all behind him because he’s a very important player. It shows Gareth’s trust because he’s played in both games [this week] – and look at the Euros what he’s done.

“People need to understand he’s a big part of the England team and have to accept it.”