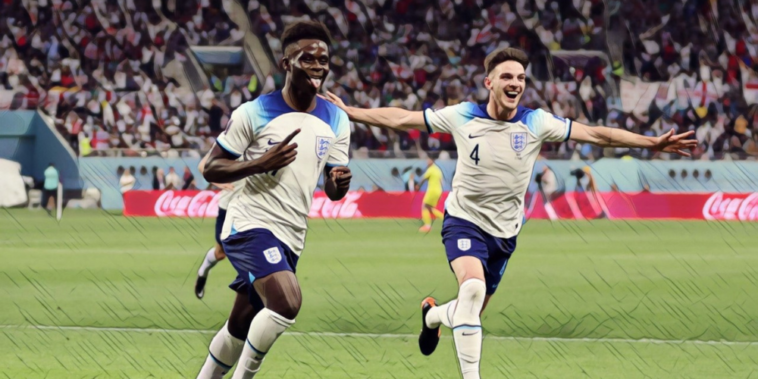 England began their World Cup campaign in fine fashion after thrashing Iran 6-2 to make a perfect start in Group B.

Following an impressive win for Gareth Southgate and his side, we look at five things we learned from England’s opening win in Qatar.

It’s no secret now, but Jude Bellingham is a bit special.

Bellingham’s rise has been meteoric and the midfielder continues to take each step in his stride. After becoming England’s youngest major tournament player at Euro 2020, he marked his first World Cup appearance with a brilliant performance against Iran.

The 19-year-old featured for just 56 minutes at the European Championship, but just over 12 months later is now an irreplaceable part of Gareth Southgate’s side. Bellingham brings a different dynamic to the England side, with his drive and coolness a feature of the thumping win over Iran.

Start as we mean to go on. Good time to finally get my first goal for England. Another dream come true. Let’s keep pushing!🏴󠁧󠁢󠁥󠁮󠁧󠁿🙌🏽 pic.twitter.com/NHenrrhwsN

There’s a completeness to the game of the Borussia Dortmund starlet that defies his age. Against Iran, only Kieran Trippier made more final third passes, only Declan Rice regained possession on more occasions and only John Stones bettered Bellingham’s 96% pass accuracy.

In all areas of box-to-box influence, he excels and we haven’t even got to his opening goal, a wonderful header as he arrived in the box to head home Luke Shaw’s cross for his first international goal.

Effective, energetic and seemingly everywhere in the England engine room.

If ever there was an example that the concussion rules need to change, this was it.

Iran goalkeeper Alireza Beiranvand was involved in a heavy collision with a teammate, one which is understood to have left the 30-year-old with a broken nose and concussion. Beiranvand received treatment from the Iran medical team and attempted to play on despite clearly being short of his full senses.

Two minutes later he fell to the turf and requested to be substituted. It was an incident that demonstrated that changes are needed regarding head injuries.

The introduction of temporary concussion substitutes could be one solution. A substitute who can temporarily enter the field while the injured teammate receives treatment and is properly assessed by medical staff, meaning teams are not disadvantaged and in a rush to make a judgement call.

Furthermore, the decision on head injuries could perhaps be taken away from those directly involved. There was a clear determination from Iran not to lose their number one goalkeeper, despite his obvious difficulties. Introducing a neutral medical assessment could prove beneficial and reduce the risk around head collisions.

Redemption for Rashford and Saka

England’s achievement in reaching the final of Euro 2020 was marred following the aftermath of defeat to Italy, as several England stars received sickening racist abuse.

Marcus Rashford, Bukayo Saka and Jadon Sancho all received vile remarks on social media, with multiple arrests made in incidents that heightened the need for social platforms to make changes and crack down on discriminatory language being used.

Saka’s last kick for England at a major tournament was his missed penalty against Italy, the decisive contribution as the Three Lions lost at Wembley. Fast forward to the World Cup and Arsenal’s brilliant young winger shone in the opening fixture in Qatar, scoring twice to earn the man-of-the-match accolade against Iran.

After their last game in a major tournament, Bukayo Saka and Marcus Rashford suffered racial abuse for missing penalties in the Euro final.

Saka was a menacing threat all afternoon in a performance full of fizz, while Rashford earned his own slice of redemption after coming off the bench to score the fifth. The Manchester United forward needed just 49 seconds to make his mark, a wonderful moment for a talent who appears back on an upward curve following a period of mixed performances.

There’s a lot to like about this England squad and Saka and Rashford – good players and good people – epitomise that. It was a warming moment to see both thrive against Iran following the disgraceful events that followed the Euro 2020 final.

The World Cup is only days old and we’ve already seen VAR more than a little prevalent.

England’s game with Iran was no different with the inconsistency of the technology and decisions of the officials criticised once again.

Harry Maguire saw an appeal for a penalty rejected after being hauled to the ground inside the area during the first half, before Iran were awarded a late spot-kick for a rather less obvious coming together. Eric Dier was penalised for a marginal shirt pull, a baffling decision given Maguire’s appeal was turned away earlier in the contest.

The World Cup referees appear to be focused on grappling inside the area, with Argentina winning an early penalty against Saudi Arabia in similar circumstances. We’re more than ok with a tightening of WWE style wrestling in the penalty box, but consistency would be welcomed.

England’s woeful Nations League campaign had tempered expectations ahead of Qatar, with the optimism that had swelled following a run to the final of Euro 2020 somewhat reduced.

A brilliant opening performance has again altered assessments of England’s chances. Iran were admittedly limited opponents, but there was a vibrancy to England’s display that has been lacking in past major tournaments.

Southgate’s side have a blend of tournament experience and a fearlessness that comes with youth, with the likes of Bukayo Saka and Jude Bellingham leading the charge. The question marks over Harry Maguire and Raheem Sterling were answered, as both again demonstrated an ability to perform for the Three Lions despite struggles at club level.

The start we wanted. More work to be done 👊 pic.twitter.com/G618Mf0mg3

That England hit six without Harry Kane on the scoresheet was another welcome sign, amid suggestions that Southgate’s side are too reliant on the Tottenham forward. England have often stuttered in these type of games before bowing out when the tougher tests arrive. A dominant performance of goals and fluid football was the strong start needed to increase confidence.

At times England appeared to boast the understanding of a club side against Iran. Rarely has that been said about the Three Lions in past tournaments.