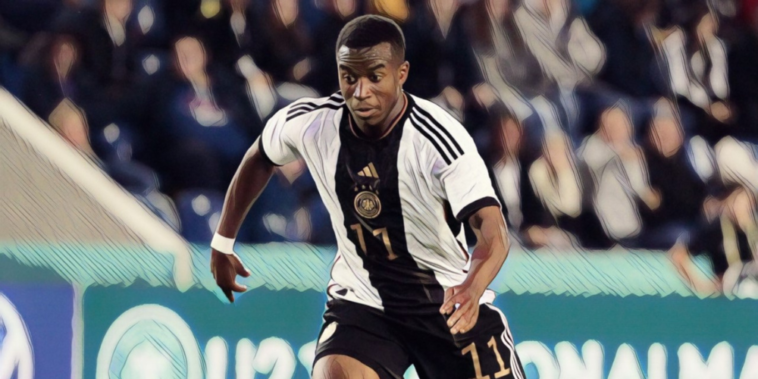 The FIFA World Cup is the greatest stage of the game and the 2022 tournament begins in Qatar this weekend.

The competing nations have finalised their squads for the World Cup and include some of the finest young talent on the planet. Past major tournaments have often been littered with teenage talents who make an impact and we’ve decided to look at some of the starlets who could shine this winter.

Here are eight teenagers who will be hoping to make an impact at the World Cup.

Bellingham is among the more established names on this list, with the midfielder a household name after an impressive emergence at Borussia Dortmund.

The 19-year-old is the youngest member of Gareth Southgate’s squad for Qatar and is expected to play a prominent part in England’s challenge, having impressed during an audition for a central role during September’s international break.

One of my biggest dreams growing up was to play at a world cup, I’m so grateful to have been given the chance to do so. Will give everything to try and make it a tournament that the country can be proud of. Let’s go.🏴󠁧󠁢󠁥󠁮󠁧󠁿❤️ pic.twitter.com/fMtNRSnvMx

Bellingham became the youngest player to feature for England at a major tournament at Euro 2020, when he came off the bench in the 1-0 win over Croatia aged 17 years and 349 days. He featured for just 56 minutes during that tournament, but has since developed into English football’s most exciting talent.

His dynamic box-to-box football could prove a fine compliment to Declan Rice, with Bellingham possessing goal threat after becoming just the third teenager to score in four consecutive Champions League games earlier this season. He has featured in every minute of Dortmund’s Bundesliga campaign and has nine goals in all competitions so far this season.

Pedri is another who has already made his mark for club and country, having been named as the tournament’s Best Young Player during Spain’s run to the last four of Euro 2020.

Still just 19, he is already closing in on a century of Barcelona appearances and has earned 14 caps for the national side.

Pedri and fellow teenager Gavi are set for major roles in Spain’s campaign, with the duo possessing a maturity to their game that defies their age. Their technical talent, awareness and vision are hallmarks of the great Spanish midfielders of the past two decades and each will be hoping to write their own history in the colours of La Roja.

Pedri: "I want to score my first goal for the national team. It would be nice if it happened at the World Cup." pic.twitter.com/uKqdM85m82

Often viewed as the natural heir to Andres Iniesta for club and country, he has been described by head coach Luis Enrique as a unique talent. He is, arguably, already Spain’s most important player.

Antonio Silva has been included in Portugal’s squad for the World Cup following his impressive breakthrough campaign at Benfica.

The teenager was thrust into the side earlier this season after impressing Roger Schmidt in Lisbon and his performances have since been rewarded with a place in Portugal’s plans for Qatar.

While uncapped for the senior side, he will hope to earn a place alongside Ruben Dias at the heart of the defence. Silva has been likened to Dias, who also came through the academy set-up at Benfica before establishing himself as one of Europe’s top defenders.

☑️25/10: first-ever goal for Benfica against Juventus in the UCL

☑️06/11: brace against Estoril in the league

The central defender impressed as Benfica reached the Champions League’s last 16, topping a group containing both PSG and Juventus. He scored his first goal for the club during a 4-3 win over the latter and evidenced his threat from set-pieces with a league double against Estoril earlier this month.

Commanding in the air and boasting positional intelligence, he has been backed to be the long-term successor to Pepe for the national side.

Youssoufa Moukoko is the youngest player travelling to the World Cup, with the uncapped forward set to celebrate his 18th birthday this weekend.

Moukoko shot to prominence following a remarkable goalscoring record for Borussia Dortmund’s youth sides, in which he scored an astonishing 141 goals in just 88 games for the club’s u-17 and u-19 sides.

17-year-old Youssoufa Moukoko has been called up to Germany’s World Cup squad.

If he plays, it will be his first appearance for the senior national team 🤩 pic.twitter.com/LMMapSpPE2

The teenager has since broken into the senior side and has six league goals this season, though just eight of his 14 appearances have come from the start.

Germany lack a recognised option at centre-forward and Moukoko – who has six goals in five games for the u-21 side – will hope to compete for a place in the side.

Musiala is among the most exciting talents in European football and has had a blistering start to the season at Bayern Munich.

The 19-year-old – who represented England up to u21 level before declaring for Germany, the country of his birth – has shone in a number of advanced roles for the Bundesliga champions and this season has began to produce elite numbers.

Musiala has scored nine goals and laid on a further six assists in just 12 league starts for the Bundesliga champions and has the talent to drive Germany into the latter stages. This is far from a vintage German side, but in Musiala the side have a gem.

The midfielder shines in half-spaces with his smooth dribbling and already has 17 senior caps to his name. He will form part of an exciting collection of creative talent, alongside club teammates Leroy Sane, Serge Gnabry and Thomas Muller.

“Helping the team, scoring as many goals as possible, creating chances and playing like I do here in Munich,” Musiala told Kicker on his World Cup ambitions.

“I think we have a really good team that can go really far. We go into the tournament with the mindset of being able to win the trophy. Is it realistic? Yes! You have to believe that you can win.”

Garang Kuol’s rise would not look out of place in the Goal! film franchise.

The 18-year-old only signed his first professional contract in June, but has since earned a high-profile move to the Premier League and has earned inclusion in his nation’s World Cup squad.

Kuol was born to South Sudanese parents and moved to Australia as a refugee aged six. Fast forward a little more than a decade and will now represent the Socceroos in Qatar after being included in Graham Arnold’s squad for the tournament.

18 years of age. The future of Newcastle and Australian football. ⚫️⚪️🇦🇺 pic.twitter.com/2VjGsV0GIs

The exciting forward burst onto the scene with four goals in his first seven A-League appearances for the Central Coast Mariners, who later agreed a deal to sell Kuol to Newcastle United. Despite having never started a senior game, he will move to English football in January and take his place in Australia’s squad for the World Cup.

He made his debut for Australia as a substitute in September, setting up a goal for Jason Cummings off the bench. He became the nation’s youngest debutant since Harry Kewell in 1996.

Explosive, unknown and fearless, he represents the definition of a World Cup wildcard.

Yunus Musah has been linked with a move to the Premier League and will form part of the USA’s inexperienced side in Qatar.

The midfielder spent seven seasons in the academy system at Arsenal before a move to Valencia, where he has become a first-team regular across the past three campaigns. Musah represented England at youth level – and was remarkably eligible for England, the United States, Ghana and Italy – before pledging his international allegiance to the Stars and Stripes.

"Things happen in mysterious ways…" @yunusmusah8 captained England's youth teams… but in a couple of weeks he'll be lining up against them at the #WorldCup 👀#BBCWorldCup pic.twitter.com/7p2xKfrJpJ

He has since earned 19 senior caps and will come face-to-face with the Three Lions when the two teams meet in Group B on November 25.

Musah looks set to hold down a midfield role for the USA for the next decade, an athletic midfielder who is smooth and intelligent in possession. He is one of a growing number of Americans in a top-level European league and forms part of an exciting core alongside the likes of Christian Pulisic (24), Weston McKennie (24), Sergino Dest (22) and Giovanni Reyna (20).

Xavi Simons could earn his first cap for the Netherlands at the World Cup, with the uncapped teenager included in Louis van Gaal’s squad.

Simons was backed for a bright future after making headlines in Barcelona’s academy system, where he was schooled in the club’s infamous La Masia set-up. In search of a faster route to first-team football, he departed for Paris Saint-Germain in 2019, but made just 11 appearances across three seasons.

Words cannot describe how I feel right now!!!! This is a dream come true, thank you to my family and the people closest to me, and especially to my mom, my brother and my sister for always having my back and loving me unconditionally!!!!

PSV Eindhoven made a move for the 19-year-old last summer and he has flourished under the management of Ruud van Nistelrooy, beginning to fulfil his vast potential. He has scored eight goals in 14 league appearances for the Eredivisie side, shining in an advanced role.

He starred during PSV’s Europa League win over Arsenal in October and has been rewarded with a maiden call to the Oranje squad. Paris Saint-Germain will be glad a buy-back was inserted into his sale.