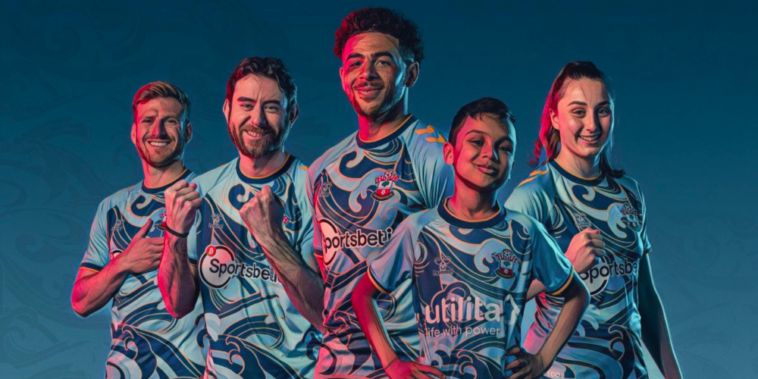 Premier League clubs are dropping their new kits this summer, with fans treated to a first glimpse of their club’s new colours.

Finding a kit that appeals on mass to the fanbase can be difficult and the latest Premier League releases contain the usual collection of hits and misses.

We’ve picked out some of our least favourite designs, here are five of the worst new kits ahead of the 2022/23 Premier League season.

After the success of last season’s home kit – which we ranked at number one in our best home shirts of the 2021/22 campaign – this is regression for Patrick Vieira’s forward-moving Eagles.

Macron’s take on the club’s traditional red and blue stripes is an unusual one and, for us, it’s one that doesn’t quite work.

There’s a Crayola colouring competition vibe to the scribbled stripes on Palace’s new shirt, while the thick white bands on the sleeve do little for the overall aesthetic.

The away shirt isn’t much better with a similar ‘wet play’ look on the front as red and blue scribbles form a sash down an otherwise clean-looking white shirt.

Back to the ‘drawing board’ for Macron.

Southampton have described their away kit for the 2022/23 as the club’s ‘boldest yet’ and it’s a statement we don’t disagree with.

However, when it comes to fashion ‘bold’ can often also translate as ‘something no one else really wants to wear’ and that is the kind of look the Saints have gone for with this design.

The teal, aqua and gold design takes inspiration from Southampton’s docks, but the multi-coloured mash up – incorporating swirls and waves – is a bit of an eye sore in truth.

Pink kits have been popular in recent seasons, but we’re not sure how well this offering will go down on Merseyside.

The ugly-looking Stake.com sponsor sits upon several diamonds designed to pay tribute to the Prince Rupert’s Tower, but in reality it distracts on a kit that could have been so much better without their inclusion.

For us, it’s just not working.

OFFICIAL: Everton’s away kit for the 2022/23 season. pic.twitter.com/RNuF4JtyWB

Tottenham are another Premier League side to have gone ‘bold’ with their away designs in recent campaigns, following up last season’s space-themed design with this offering.

The main part of the shirt is a purple/blue shade, with darker sleeves and a neon yellow trim. Whilst simplistic in design, the colours fail to work harmoniously and the shirt screams training wear.

Fortunately for the north Londoners, their 2022/23 home shirt is among the cleanest looks of the new campaign released so far.

A debut for our brand new away kit 😍 pic.twitter.com/6aUOLcBk6O

For those prone to headaches and/or migraines, it may be best to look away now.

Liverpool’s new away shirt for the 2022/23 campaign is said to be inspired by the city’s ‘vibrant music scene’, but the impact is perhaps more similar to a nightclub where the music is too loud and the drinks too strong.

The white shirt is covered in a garish multi-coloured pattern on a white base colour, representing somewhat of an optical illusion when looked at for a little too long.

After the popularity of last season’s away shirt, this one feels hugely underwhelming, an attempt at innovation while forgetting the basics for making a well-liked kit.

We'll wear our new @nikefootball away kit for the first time in today's pre-season fixture against Man United 👌 pic.twitter.com/2FWxxPlozv