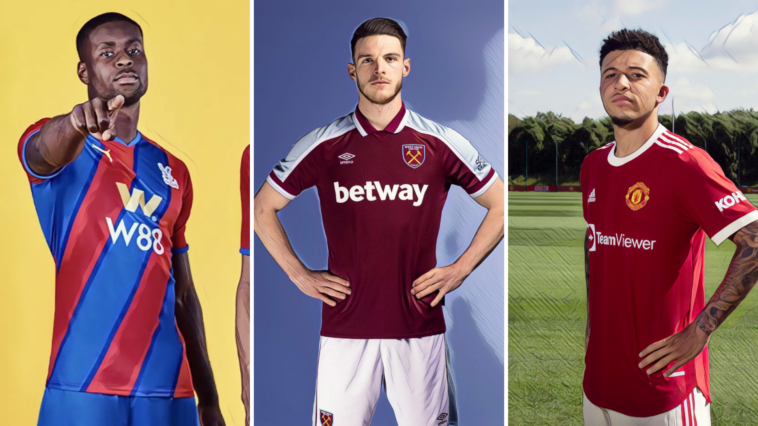 The Premier League makes its long awaited return this weekend and with the new season comes new colours, with clubs having released a series of excellent new shirts ahead of the 2021/22 campaign.

Ahead of the opening round of fixtures, we’ve picked out five of the best new home kits for the 2021/22 Premier League campaign.

Manchester United’s latest home shirt has divided opinion upon its release due to a change in sponsorship, but we have to admit this has grown on us since its first reveal.

The kit pays homage to the side’s of the 1960s, an era in which the Red Devils became England’s first European Cup winners as George Best, Sir Bobby Charlton and Denis Law weaved their magic on the continent.

Retro has arguably never been more in fashion and this offering is steeped in nostalgia, the simplistic red design mixed with white shorts and black socks containing a gold devil detailing.

Sportswear brands can often overcomplicate when it comes to Premier League shirt designs, and Tottenham’s new home shirt for the season is a testament to how going back to basics can work effectively.

Spurs new strip is smart and simplistic, paying tribute to the club’s cockerel crest in its centenary year with the bird having first appeared on the north London side’s shirts in 1921.

The Nike swoosh and cockerel are in navy detail, matching the shorts and socks that will be worn alongside the club’s traditional white shirts, with the red AIA sponsorship standing boldly in the centre.

Brighton have returned to their familiar blue and white stripes for the 2021/22 season, having sported a blue shirt with white pinstripe detailing last season.

The shirt commemorates a decade at the Amex Stadium, and possesses a yellow trim down the shirt and blue shorts, alongside white socks.

The Seagulls’ American Express sponsorship sits neatly in the centre of the shirt, with summer signing Enock Mwepu sporting the new colours for the first time at the Amex during the weekend friendly defeat to Getafe.

West Ham have also taken the retro route for the forthcoming season, the Hammer’s home shirt inspired by the kits worn across the turn of the millennium

Umbro have largely excelled since replacing Adidas as West Ham’s manufacturers in 2015 and the latest jersey is perhaps the best produced so far, the traditional claret colours complimented by blue detailing on the sleeves and a smart collar.

The shirt is also available without the inclusion of the club’s sponsors Betway, which makes the already impressive aesthetic even easier on the eye.

Crystal Palace have waited a little longer than most to release their home shirt for 2021/22, but it’s fair to say its been worth the wait for Eagles fans.

Palace have looked to the club’s long association with the sash in their latest design, the traditional red and blue colours blending brilliantly in the diagonal look for the new campaign.

The shirt is added to with blue shorts and blue socks, with both possessing red trims.

Patrick Vieira has plenty of work to do as he begins his reign at Selhurst Park, though the new boss will be safe in the knowledge that his side will be one of the Premier League’s best-dressed in 2021/22.