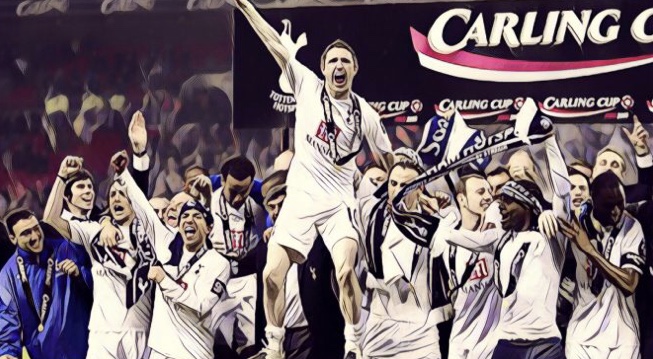 Our resident Spurs fan Karl Gwilliam has been season ticket holder at White Hart Lane for over 30 years, and here he gives us his take on the 5 greatest Tottenham Hotspur games he has witnessed…

I had to put this as my favourite ever game, as it was the first time I saw us win a cup. I had been to the 1987 Cup Final against Coventry, had seen us lose and cried the whole way home, so going back and winning was the best feeling ever.

This game will always been remembered for the famous Gazza tackle from which, truth be told, he never fully recovered.

We went one down after that foul as Stuart Pearce hit one of his famous rockets with his left foot, but when you look at that goal again we should have had a free-kick as one of their men in the wall completely smashed Gary Mabbutt out of way.

We played some good football on the day and in a way Gazza going off helped us, as we couldn’t just rely on him to win us the game. Lineker had a good goal ruled out for offside when he was clearly on, and to make matters worse he went on to miss a penalty as well.

Paul Stewart got us level and the game went to extra time where Des Walker managed to head a corner into his own net to give us the cup.

Again this is a game that I will never forget being at with my mates. We never had a good record at Anfield, like most teams, so we there went in hope rather than expectation.

Walters put Liverpool one up and it wasn’t looking great, but when you had Klinsmann and Sheringham up top you always stood a chance. So it proved as Sheringham got us level with a brilliant curled finish which went in off a post, and caused me and my mate to drop five rows of seats in the celebrations.

The game was tight after that until, with 90 seconds to go, up stepped the main man Klinsmann, and as cool as you like slotted the ball home at the Kop end to give me a day I will never forget.

It was the League Cup semi-final and our backs were against the wall. We were playing a Chelsea team that we could never really get the better of, and were trailing 2-1 from the first leg at Stamford Bridge.

I have to say I wasn’t confident going in to the game but wow was I wrong. We played Chelsea off the park that night.

The game finished 5-1 (6-3 on aggregate) and on to the final we went. One of the best moments was when Poyet was subbed off by Glenn Hoddle and he left the pitch jumping up and down in celebration, which really got up the Chelski fans’ noses and made him a cult hero at the Lane.

The first League Cup Final played at the New Wembley and what a day.

Once again we were up against that Chelsea team who always seemed to have our number, and this game looked like it was going the same way.

We outplayed Chelsea on the day and deserved the win, Drogba took one of his famous dolphin dives and scored from the free-kick but that didn’t stop us from playing our football.

Berbatov slotted us level from the spot and an extra-time winner from the head of Jonathan Woodgate sealed a famous Cup win.

Our first season in the Champions League and the night that made Gareth Bale a world superstar, as he took the then best full back in the world, Maicon, to school.

We were amazing on the night and they couldn’t get near us let alone Bale. You just watched with your mouth open, as time and time again he ran at a defence which you could see were terrified, and didn’t know what to do. Also one of the best atmospheres I have seen at the lane.