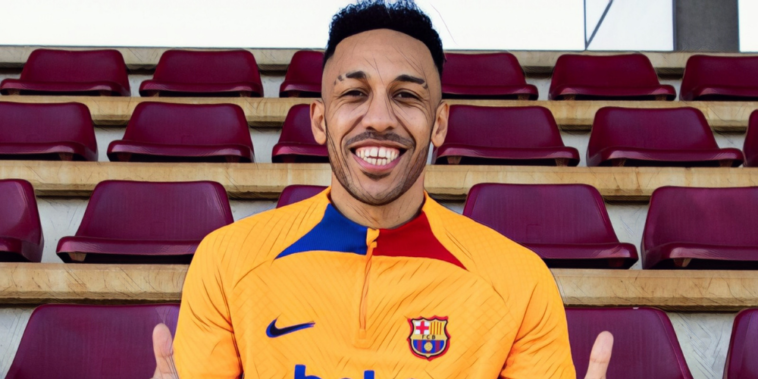 Pierre-Emerick Aubameyang has been officially unveiled as a Barcelona player, the forward having completed a free transfer move from Arsenal.

Aubameyang’s exit came in acrimonious fashion after an exile at the Emirates, but he departs as one of the Gunners’ finest footballers of recent seasons after scoring 92 goals in just 163 appearances for the club.

The 32-year-old – who captained the North Londoners to FA Cup success in 2020 – will now hope to make an impact in the colours of Barcelona, with Aubameyang joining a lengthy list of names to have represented both clubs.

Here are five of the best players to have played for Arsenal and Barcelona.

Emmanuel Petit arrived at Arsenal as part of a French revolution in the late nineties, reuniting with former Monaco manager Arsene Wenger in North London.

Petit had played predominantly in a defensive role during his time in Ligue 1, but under Wenger’s tutelage transformed into one of the Premier League’s most dominant midfielders.

Elegant and industrious, he acted as a deep-lying pivot and formed a formidable partnership with Patrick Vieira, one that inspired the Gunners to a domestic double during the 1997/98 season.

20 years ago, @Arsenal signed Emmanuel Petit who had a 🔝 debut season 🏆🏆#OnThisDay pic.twitter.com/aZJ4i1qQa7

That summer he scored in the final as France won the World Cup on home soil, with Petit at the peak of his powers as a left-footed midfield screen with intelligence and tenacity.

He signed for Barcelona in a double deal alongside teammate Marc Overmars in 2000, but struggled to replicate his previous success during a single season in Spain.

Petit returned to the Premier League the following summer and spent three seasons with Chelsea before retirement.

Arsenal gambled on the signing of Marc Overmars in 1997, the winger having starred as part of Ajax’s famous Champions League-winning side two seasons earlier before injury problems halted his progress.

It proved a brilliant acquisition as Overmars found his finest form in the Premier League, enjoying a scintillating first season as the Gunners won a Premier League and FA Cup double.

The Netherlands international formed a fine understanding with compatriot Dennis Bergkamp and delighted the North London fanbase with his electric speed, scoring a decisive winner against Manchester United as Arsenal roared back in the 1997/98 title race.

Injuries impacted his time across the following two seasons but he remained a top talent, giving full-backs across the Premier League a torrid time.

He signed for Barcelona in a deal worth £25m – making him the most expensive Dutch footballer ever at that time – but fitness issues plagued his time at the Camp Nou despite occasional glimpses of the old magic.

He retired after struggling with a persistent knee problem in 2004, having scored 19 goals in 141 appearances for the Catalans.

Few would argue the notion that Thierry Henry is the greatest footballer in Arsenal’s history, the Gunners’ all-time leading scorer and perhaps the finest of the Premier League era.

Across eight seasons with the North Londoners the French forward toyed with opposition defenders, finishing as the league’s leading scorer on a record four occasions and twice winning the PFA Player of the Year award.

Henry was both a great goalscorer and a scorer of great goals, capable of moving from standstill to whirling speeds in a matter of seconds as desperate defenders were left in his wake.

His exit was a huge blow to Arsenal as he departed for Barcelona in 2007, in search of the prize that had eluded him in the capital – the Champions League.

He scored 49 goals in 121 appearances for Barcelona across three seasons and won a historic treble under Pep Guardiola in 2008/09, completing a set of trophies that includes multiple league titles, the World Cup, European Championship and Champions League.

Arsenal secured the signing of Cesc Fabregas from Barcelona’s academy system, prising the teenage midfielder from La Masia with the promise of a clear path to first-team football.

He became the Gunners’ youngest-ever player when making his debut at 16 and grew in importance and influence over the following seasons, becoming a lead figure in the post-Invincibles era in North London.

Fabregas was brilliant at his best as the creative catalyst of an entertaining side, being named as the PFA Young Player of the Year in 2007/08 and twice being included in the divisional Team of the Year.

His finest football came during an outstanding 2009/10 campaign, scoring 19 goals and providing 21 assists in just 37 appearances across all competitions.

Speculation continued to surround a return to Barcelona as Arsenal struggled for silverware, however, and in 2011 he completed a £34m return to the Camp Nou.

He spent three seasons with the Catalans and won a host of honours, including La Liga and the Copa del Rey, but struggled to command an automatic place in the side for much of his time with the club.

Fabregas returned to the Premier League to sign for Chelsea in 2014 and won two Premier League titles during his time at Stamford Bridge, in addition to FA Cup and League Cup winners’ medals.

He ranks second in Premier League history for assists with 111, behind only Ryan Giggs.

Alexis Sanchez was a whirlwind of explosive attacking energy at his best, first in the colours of Barcelona before a move to Arsenal.

Sanchez signed for Barcelona from Udinese and enjoyed three successful seasons in Spain, winning six trophies including a La Liga title and the Copa del Rey.

He scored 47 goals in 141 appearances for the Spanish side – including an El Clásico winner against Real Madrid – but was squeezed out following his best season in Barcelona after the arrival of Luis Suarez from Liverpool.

Barcelona’s loss proved to be Arsenal’s gain as the Chilean enjoyed the best period of his career at the Emirates, scoring 80 goals across just three-and-a-half seasons with the Gunners.

He twice won the FA Cup with Arsenal – scoring in both final successes – before leaving under a cloud to sign for Manchester United.

He endured a miserable time with the Red Devils and has since failed to recapture the heights of his exploits at Arsenal.