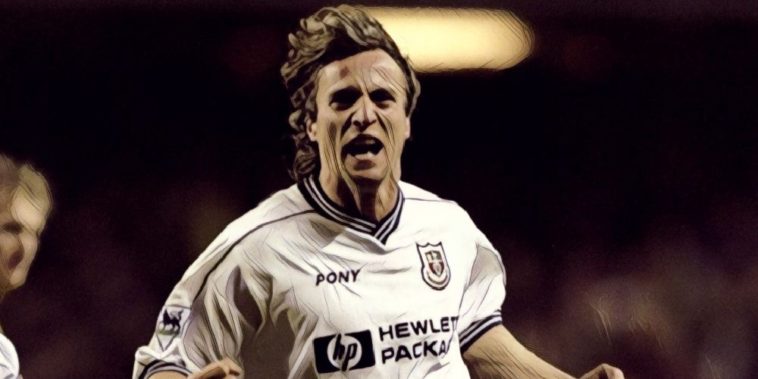 Tottenham and Newcastle meet in the Premier League this weekend, a clash between two sides with long histories of top talents.

There have been several stars who have represented both clubs throughout the years, with Kieran Trippier the latest to have adorned the colours of both teams after making the move to St James’ Park in January.

The former Spurs full-back joins a long list of stellar names to have represented both sides and ahead of this weekend’s meeting we’ve picked out five of the best.

Newcastle took a punt on Chris Waddle after the non-league winger had been rejected by several professional clubs, a £1000 investment that would pay dividends as he broke into the side and emerged as an exciting talent.

He formed an entertaining front line alongside the likes of Kevin Keegan and Peter Beardsley as Newcastle won promotion to the First Division in 1983–84, before impressing in the top division to earn a move to Tottenham.

Waddle scored twice on his debut for the North Londoners and netted 42 times in 173 appearances across his four seasons with Spurs, being named in the PFA Team of the Year during his final season with the club.

Waddle – who won 62 caps for England – moved on to Marseille and won three league titles with the French side, in addition to reaching the 1991 European Cup final.

After returning to English football he won the FWA Footballer of the Year during the 1992/93 season after helping Sheffield Wednesday reach both domestic cup finals.

Paul Gascoigne broke into the Newcastle side as a teenager and soon made the rest of the nation sit up and take notice, bursting onto the scene as one of the most naturally gifted talents of his generation.

‘Gazza’ was entertaining and exuberant as he carried the ball through midfield with daring dribbles, his impudence soon capturing the attention of both the masses and rival sides.

He made 104 appearances for Newcastle before moving to the capital to sign for Tottenham, having won the PFA Young Player of the Year during his final season at St James’ Park.

No words needed, take it away Paul Gascoigne. #OnThisDay in 1991…#EmiratesFACup @SpursOfficial pic.twitter.com/RgeNlMKO4d

Gascoigne broke into the England side soon after his move to Spurs and became a huge fans’ favourite, starring during the Three Lions’ run to the World Cup semi-finals at Italia ’90.

His best season with Spurs came the following campaign as he scored 19 goals in all competitions, six of which came in the club’s run to FA Cup success, including a stunning semi-final free-kick against Arsenal.

He made 112 appearances for the North Londoners before joining Lazio, later having spells at Rangers, Middlesbrough and Everton.

Les Ferdinand’s prolific record at Queens Park Rangers persuaded Newcastle to spend £6m on the forward in 1995, arriving as a high-profile replacement for the departed Andy Cole.

That fee proved a fine investment as Ferdinand hit the ground running in the North East, scoring 29 goals in all competitions for the Magpies to win the PFA Players’ Player of the Year award.

The arrival of Alan Shearer in a world record deal the following summer provided Newcastle with a devastating forward partnership, but despite a combined 49 goals the duo were unable to fire Kevin Keegan’s side to the Premier League title after a runners-up finish in 1996/97.

He went on to score 41 goals in 68 #PL games with the Magpies 👏 pic.twitter.com/qQI4p0INpF

Ferdinand was surprisingly allowed to move on at the end of that season and signed for Spurs, the club which he had supported as a child.

Fitness issues prevented him from reaching the heights of his Newcastle career, however, as he scored just 39 goals in 149 appearances across five-and-a-half seasons.

He did form part of the side that won the League Cup in 1999 to win his first major honour in English football, however, beating Leicester 1-0 at Wembley.

David Ginola had starred alongside Ferdinand for two seasons at Newcastle, forming part of Kevin Keegan’s ‘Entertainers’ side that finished as Premier League runners-up in consecutive campaigns.

Ginola moved on and reunited with Ferdinand at Spurs, with the North Londoners indulging the winger’s match-winning talents, providing the platform for the Frenchman to win the PFA Player of the Year award in 1998/99.

Ginola received the accolade ahead of Manchester United’s treble-winning team and became the first – and so far only – player in history to win the award at a team that finished outside the Premier League’s top half.

He scored 22 goals in 124 appearances across three seasons before less successful spells with Aston Villa and Everton.

Stephen Carr might be the odd one out in this list of goalscoring and creative greats, but the former Ireland full-back was a reliable performer at right-back during a long Premier League career.

Carr spent a decade with Spurs and made 272 appearances in all competitions, forming part of the club’s League Cup-winning team in 1998/99 and twice being named in the PFA Team of the Year.

Twice named as the North London side’s Player of the Season, he moved on to sign for Newcastle in a £2m deal in 2004.

Carr’s four-season spell with the Magpies saw the side struggle to replicate the success of the Sir Bobby Robson era, however, finishing 14th, 7th, 12th and 13th in an indifferent period.

He moved on to sign for Birmingham in 2008 and added a second League Cup winners’ medal after the Blues upset Arsenal to win the trophy in 2010/11.