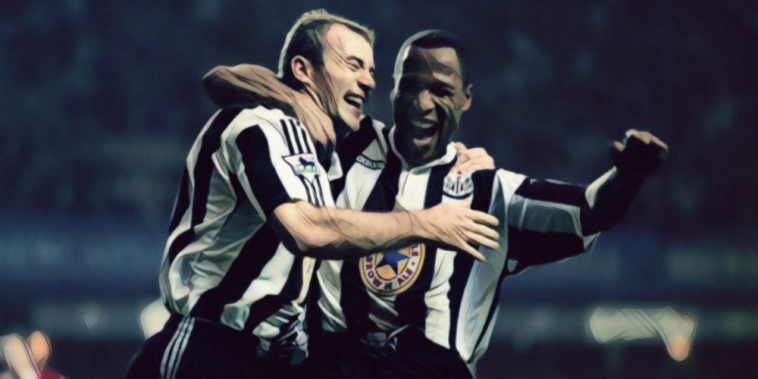 “We thought we had the best centre-forward at the time in Les Ferdinand, who got the Player of the Year award the season before. Then all of a sudden we got Alan Shearer. In my opinion they are the best combination I have ever seen. They couldn’t be handled”

As ex-Newcastle United and England midfielder Rob Lee gushed over the prolific career of his close friend Alan Shearer, it was patently apparent that he held his former captain in the highest esteem.

However, as the interview progressed, each word of praise he uttered was spoken with a distinctly sentimental tone – one tinged with sorrow. When the topic of the all too brief partnership between Shearer and Les Ferdinand arose, it became evident that the premature dismantling of the potent strike duo was a poignant source of regret.

Lee’s sadness is shared by every Geordie fan who is old enough to remember what happened.

Snapped up by QPR from non-league Hayes in 1987, Ferdinand made his name in West London by bagging an impressive 90 goals for the Rs over five prolific seasons. Like fellow Hayes graduate Cyrille Regis, he adapted to the demands of professional football and soon developed into the quintessential No. 9.

He had the strength to hold up the ball and the athleticism to run in behind. A hammer of a right foot and a head carved out of granite. Despite being just 5’11” he was superb in the air, at times levitating for what felt like an age. After scoring the decisive goal in his first Tyne-Wear derby, the morning papers claimed that Ferdinand “rose like a salmon” to nod home the winner.

His prolificacy earned him cult status at Loftus Road, along with his maiden England call-up and the attentions of the cream of English football. Having almost joined Manchester United (who instead signed Toon striker Andrew Cole) the previous season, ‘Sir Les’ made a £6m switch to Newcastle in the summer of 1995.

The England international hit the ground running in the North-East, quickly developing a deep rapport with strike partner Peter Beardsley. Ferdinand went on to score an impressive 25 league goals that season, as Keegan’s scintillating side – known nationwide as ‘The Entertainers’ – mounted a serious title challenge, albeit one that was doomed to fail.

Despite being 12 points clear at the top of the table in mid-January, Newcastle imploded, with Keegan’s philosophy of outscoring the opposition ultimately costing his side. Suffering a catastrophic dip in form, The Magpies lost five out of eight games in the run in – including their infamous 4-3 loss at Anfield – and surrendered the title to Manchester United.

In the aftermath, Keegan dipped into the transfer market, signing Shearer, one of the few players to have outscored Ferdinand that season.

Unearthed by legendary scout Jack Hixon, Shearer spent his early career with Southampton before Jack Walker’s millions brought him to Ewood Park in 1992. He went on to play a key role in Blackburn’s incredible 1994-95 Premier League triumph, scoring an astounding 34 goals as he was crowned PFA Player of the Year.

If there was a ball and a goal, nothing could stop Alan Shearer

Like Ferdinand, Shearer was a single-minded goalscorer who also put in a shift for his team – a rarely seen combination of characteristics for such a ruthless finisher. As Alan Hansen put it, “Goalscoring is a very selfish occupation and, not only did he [Shearer] do that, but he was also a great team player. He just did and had everything.”

Shearer joined his boyhood club Newcastle for a world record £15m in the summer of 1996 and, in doing so, engendered a sense of hope and expectation in the Toon Army. However, the dream move was not without its hiccups.

During contract negotiations local lad Shearer, who had been raised on stories of great Newcastle No. 9’s like Jackie Milburn and Malcom Macdonald, asked Keegan for the prestigious number – a shirt worn by Ferdinand. To Keegan’s relief, Ferdinand acquiesced, a decision he remains philosophical about to this day.

“The mere fact he [Keegan] asked me, meant he wanted Alan to have it. I would probably have done the same thing for him. When I went to Tottenham Darren Anderton was wearing the No. 9 shirt…I asked him if I could have it and he was fine with it. Now, maybe I shouldn’t have take it off him. I had loads of injuries in it, as did he!”

Keegan proceeded to mould the his new strike duo into one of the most potent partnership in the history of the division – a feat many had thought impossible.

The footballing elite thought that the pair were too similar, a theory that had been accepted by England manager Terry Venables. Despite being PFA Player of the Year that season, Ferdinand didn’t feature in a single minute of Euro 96. Venables preferred the partnership of Spurs’ Teddy Sheringham and Shearer.

In Ferdinand’s opinion, his international career was undoubtedly hampered by the similarities between he and ‘Big Al’, claiming that “it was one of us or the other, and it was normally Alan.”

Unsurprisingly, in the aftermath of Euro 96, and the signing of Shearer, rumours were rife about Ferdinand’s future at the club. However, nipping the speculation in the bud, Keegan pulled his striker aside in preseason and assured him of his worth, saying “I’m telling you now – you will not be leaving this football club. I’m one of the few in the country that believe you two can play together.”

And play together they could! Newcastle’s new dynamic duo hit a combined total of 41 league goals that season, despite both strikers missing chunks of the season through injury. With new signings Keith Gillespie and David Ginola supplying the ammunition, the pair were, as Rob Lee put it, a “real nightmare for defenders.”

For many, the peak of their partnership came during one of, if not the greatest Newcastle performances of all time – the 5-0 demolition of bitter rivals Man Utd at St James’ Park in October 1996. Shearer and Ferdinand put the United defence to the sword that night, with Shearer whipping in a fantastic cross for Ferdinand to head home The Magpies third, before scoring himself just ten minutes later.

In the post-match interview, man of the match Shearer, beamed “we’ve embarrassed them.”

It was a victory born out of their managers love for free-flowing, edge of your seat football. A triumph that came to represent everything good about the Keegan era. For Shearer and Ferdinand, it represented a vindication of sorts – with both strikers having almost joined Alex Ferguson’s side.

Despite Ferdinand and Shearer’s blossoming relationship, the Magpies fell short once again, due in large part to the mid-season departure of Keegan. His replacement Kenny Dalglish oversaw another 4–3 loss at Anfield, as Newcastle finished runners up to United for the second successive season.

Regrettably, the Ferdinand-Shearer partnership was ripped apart thereafter by owners Freddy Shepherd and Sir John Hall, who sought to recoup some of the world-record fee they had paid for Shearer. So, after scoring 50 goals in 84 games for the Magpies, the 30-year-old Ferdinand was unceremoniously sold to Spurs for £6m that summer.

Ferdinand has since declared that he never wanted to leave the club, quashing rumours that he was tired of living in Shearer’s considerable shadow.

“No, Alan Shearer was not the reason I left Newcastle”, he explained. “It is well documented I never wanted to leave Newcastle, but they came to me and said they wanted to raise £6m. I had a few options, but I grew up supporting Spurs as a kid and it was a dream about to come true, to come and play for the team you supported as a boy.”

Ferdinand failed to hit the heights he enjoyed on Tyneside the following season, managing just five goals during an injury plagued year at White Hart Lane. Similarly, an ankle ligament injury kept Shearer on the treatment table for the majority of Newcastle’s season, a campaign that saw them slump to a 13th place finish.

Despite the broadly held concerns about them being cut from the same cloth, ultimately, Ferdinand and Shearer performed far better together than they did apart.