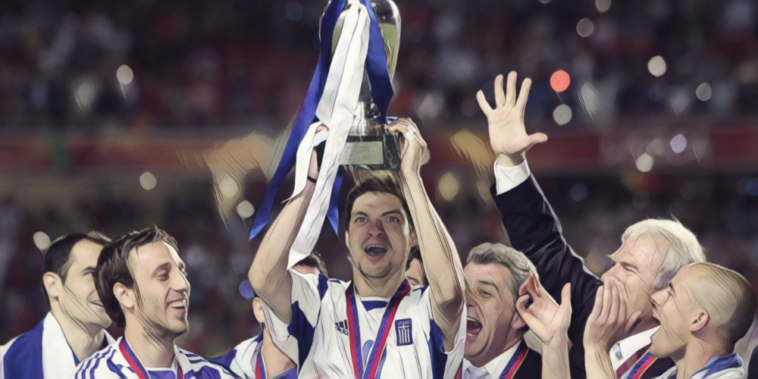 Euro 2004 proved one of the most memorable major tournaments in recent memory, a summer which saw Greece shock the continent to be crowned the most unlikely of European champions.

Greece headed into the competition having never won a game at a major finals, but a dogged defensive side defied pre-tournament odds of 100/1 to triumph in Portugal, upsetting the host nation in the final.

Elsewhere the tournament is remembered for the breakthroughs of some stars who would help define a generation, whilst the Czech Republic dazzled in free-scoring style on their way to the last four.

Ahead of this summer’s European Championship we’ve looked back at some of the stars of past editions, here are five of the best players from Euro 2004:

Theodoros Zagorakis was named as the finest player at Euro 2004 after captaining Greece to an improbable success, the midfielder the leader of the side and an authoritative presence in front of an impregnable defence.

Zagorakis had struggled to make an impact in the Premier League during three seasons with Leicester, but four years after departing English football was hoisting aloft the European Championship as the captain of Greece’s history-making side.

The midfielder summed up the team-first mentality of the rank outsiders with his relentless running and disciplined defending, orchestrating the side to help secure one of world football’s greatest upsets.

He was named Man of the Match as Portugal were beaten in the group stage opener, before repeating the feat as the same opposition were defeated in the final following an incredible run to the Lisbon showpiece.

Greece’s performances were far from pleasing on the eye, but it was a triumph for tactical discipline and ensured Zagorakis and his teammates secured an immortal place in European Championship history.

Wayne Rooney travelled to the tournament heralded as the future of English football, the teenager having become his nation’s youngest ever debutant and later goalscorer in the months prior to Euro 2004.

Rooney had made an impressive start to his international career with five goals in 13 appearances, after bursting onto the scene as a 16-year-old in the Premier League with a spectacular winner for Everton against Arsenal.

Few however, could have envisaged the impact Rooney would have amongst Europe’s elite.

He impressed even as England were stunned in their group stage opener after tormenting holders France, with one run from inside his own half winning a penalty that was spurned by David Beckham.

Two stoppage-time goals from Zinedine Zidane ultimately inspired France to a comeback 2-1 victory, leaving Sven-Göran Eriksson’s side in need of results ahead of fixtures against Switzerland and Croatia.

England’s side was stacked with leading names from a ‘Golden Generation’ including Michael Owen, David Beckham and Steven Gerrard, though it was the teenage talent who lit up the tournament for the Three Lions.

Rooney scored twice in a 3-0 victory over the Swiss with the fearless 18-year-old in inspired form, before netting twice more as Croatia were beaten 4-2 to see England advance to the last eight.

🗣️ "I don't remember anyone making such an impact on a tournament since Pelé."

The weight of expectation that several senior players have felt in an England shirt appeared not to faze the teenager, who whirled around pitches striking fear into the best defenders in world football.

His tournament sadly ended after suffering a broken metatarsal inside the opening half hour of the quarter-final defeat to Portugal on penalties, a case of what might have been for England.

The most exciting team of the tournament were undoubtedly the Czech Republic, who attacked in swashbuckling fashion to breeze into the semi-finals.

Karel Brückner’s side arrived in Portugal with a talented side and regarded as dark horses for the competition, soon emerging as favourites after making a mockery of the tournament’s Group of Death containing both Germany and the Netherlands.

At the centre of the Czech’s success was Milan Baros, a player who had struggled for confidence at Liverpool leading up to the tournament before exploding onto the international scene.

Baros netted as the Czechs turned around a 1-0 deficit to beat group minnows Latvia in their opening fixture, before scoring once more as another comeback was completed with a thrilling 3-2 win over the Dutch.

Brückner’s side had found themselves two goals down inside the opening 19 minutes before roaring back into the contest, Baros scoring his side’s equaliser with a brilliant volley from the edge of the box.

Two wins had guaranteed the Czech’s progress as group winners with a game to spare, though they maintained their perfect record with a 2-1 win over Germany, Baros on target once more with the decisive goal 13 minutes from time.

Denmark were then swept aside in the last eight with Baros scoring twice in a 3-0 victory, the forward’s speed and movement perfectly complimenting the towering talent of Jan Koller, with Pavel Nedved pulling the strings further back.

The Czech’s run ultimately ended after running into a Greek wall in the semi-finals, but Baros was amongst the most exciting players at the tournament and left with the Golden Boot after spearheading the most entertaining team at Euro 2004.

Portugal’s quest for success ultimately ended in agonising fashion with a final defeat to Greece, but the nation’s talented team impressed in reaching the Lisbon showpiece.

Whilst teammates Maniche and Cristiano Ronaldo were named in the Team of the Tournament, it was arguably Luis Figo who was the host nation’s biggest influence.

Figo had won the Ballon d’Or four years earlier and remained one of the game’s brightest talents, the midfielder the lead name of a Portugal side who bounced back from an opening defeat to Greece to progress as group winners.

The Real Madrid midfielder was named captain following Fernando Couto’s omission for the win over Russia and led the team once more in a decisive clash with Spain, moving into a central role and assisting Nuno Gomes’ winner to send the Portuguese through.

After overcoming England on penalties in the last eight, Figo was named as the best player on the pitch as Portugal beat the Netherlands in the semi-finals, Maniche’s stunning winner securing a place in a major tournament final for the first time.

Greece’s disregarded underdogs ultimately crushed Portuguese dreams in stunning style in Lisbon, a disappointing end to Figo’s run as one of the star’s of the tournament.

The man who etched his name into Greek mythology with the final winner against Portugal, Angelos Charisteas was the perfect focal point for Otto Rehhagel’s resilient and robust side.

Rehhagel’s tactics focused on compact defensive play with their forward threat coming from height at set-pieces, the towering number nine using his physical advantages to good effect throughout a memorable summer for the Greeks.

Charisteas arrived at the tournament having played a bit-part role in Werder Bremen’s domestic double during the 2003/04 season, though left as a household name following his defining contributions for the eventual champions.

Charisteas netted his first goal of the tournament with a fine finish during a group stage draw with Spain, a point which ultimately saw Greece progress by the narrowest of margins after finishing ahead of the Spanish on goals scored.

He came into his own in the knockout stages and ignited Greece’s fairytale venture with the only goal of the game against France, rising highest to power home an unstoppable header as Rehhagel’s troops eliminated the star-studded holders in Lisbon.

Greece moved into the final following a Silver Goal winner from Traianos Dellas against the Czech Republic in the last four, setting the stage for Charisteas to write his name into folklore.

An expectant home crowd were confident of Portugal lifting a first major trophy on home soil, despite Greece having caused an upset by shocking Luiz Felipe Scolari’s side in the group stages.

A summer of upsets was completed as Charisteas rose to head home the only goal of a tense final, an almost carbon-copy of his winner against the French and a goal the forward admitted changed his life forevermore.