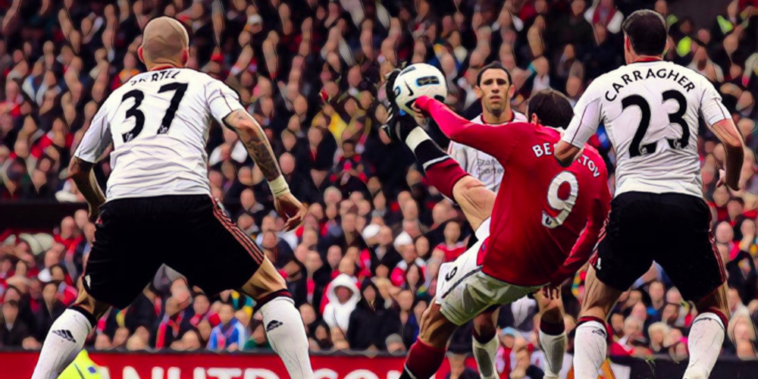 Liverpool and Manchester United resume rivalries in the Premier League this evening, a clash between English football’s most successful sides.

There’s respect and dislike in equal measure from both sides of a gigantic North-West rivalry, one that has seen some memorable clashes and unforgettable goals during the Premier League era.

Ahead of the latest instalment of English football’s biggest fixture, we’ve looked back at five of the best Premier League goals from games between Liverpool and Manchester United.

Gerard Houllier’s side were on the rise after almost a decade of disappointments during the 2000/01 season, with the Reds finding momentum on their path to a treble of cup trophies.

Having beaten the reigning champions at Old Trafford earlier in the campaign, Liverpool recorded their first double over the Red Devils in 22 years with a 2-0 win at Anfield in March 2001.

Steven Gerrard underlined his growing potential with a thunderous long-range goal to open the scoring on Merseyside, as the 20-year-old punished a retreating United defence and smashed home a spectacular strike from distance.

Gerrard ended the season named as the PFA Young Player of the Year after scoring the first of nine career goals against Manchester United, with the former Liverpool captain netting more against only Aston Villa (13) and Everton (10).

Liverpool repeated their win over Manchester United in the following season’s match-up at Anfield, with John Arne Riise announcing himself to the home crowd in sensational fashion.

The summer signing took centre stage after Michael Owen had opened the scoring for Liverpool, unleashing a phenomenal free-kick that flew beyond Fabien Barthez to double the Reds’ lead.

Riise’s rocket ripped past Barthez and saw the Norwegian immortalised in a terrace chant, as Anfield regularly echoed out into a chorus of  “John Arne Riise, ooh ah, I wanna know, how you scored that goal” during the left-back’s seven seasons on Merseyside.

Reaching almost 70mph as the ball blasted into Barthez’s goal, it was a strike that left the Manchester United goalkeeper with no chance.

Dimitar Berbatov was a footballer capable of producing sublime goals and performances, with his iconic individual showing against Liverpool the highlight of the brilliant Bulgarian’s time at Old Trafford.

Berbatov ended the season as the Premier League’s leading scorer as the Red Devils won the title in 2010/11, with an early season showcase against the club’s biggest rivals a stand-out moment.

The forward scored a stunning hat-trick as United edged a 3-2 thriller, his second goal a moment of pure inspiration as he cushioned Nani’s cross on his thigh and executed an audacious overhead kick.

Few footballers have the confidence or quality to score such a goal in a game of this magnitude, but Berbatov was more than a little special when playing his finest football.

‘Juanfield’ was how Manchester United fans christened the home of their fierce rivals in 2015, after Juan Mata scored twice to secure a precious three points on Merseyside.

In a game that became infamous for Steven Gerrard’s red card just 38 seconds after coming on as a half-time substitute, it was Mata who proved decisive around goal with a brilliant brace at Anfield.

Mata gave the visitors a deserved early lead, before scoring a stunning second with a moment of acrobatic audacity to earn his side a win.

The Spaniard exchanged passes with Angel Di Maria on the edge of the Liverpool area, before meeting the Argentine’s floated return into the box with a sensational volley to silence the home crowd and send the travelling Red Devils into raptures.

That each of the previous goals on this list came in wins makes them more memorable, but Christian Benteke’s glorious goal from 2015 deserves its place among the Premier League’s classiest consolations.

Benteke ended on the losing side as Anthony Martial scored an equally impressive goal on debut for Manchester United, but scored one of the most spectacular strikes of his career at Old Trafford.

It ultimately meant nothing in a Liverpool career that failed to get off the ground, but this was sublime from the big Belgian.