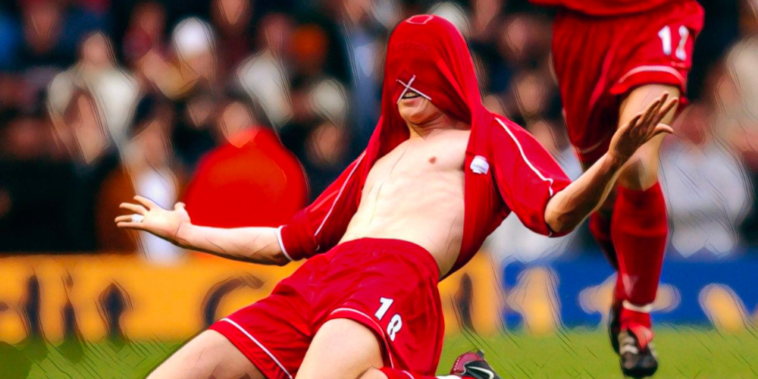 Red Arse is a game that has become popularised among football fans all over, a version of the traditional heads and volleys in which the unfortunate loser allows the victors to take aim and strike footballs at his or her – occasionally bare – backside.

There can be an overwhelming fear brought on by the anticipation of that particular pain, waiting, unsighted, for the sudden thud of a football and incoming agony.

For those unfamiliar with the flame-haired footballer from Scandinavia, Riise was a fans’ favourite across a seven season spell at Liverpool in which his penchant for hitting a football very, very, hard became the stuff of legend.

Arriving from Monaco in the summer of 2001, he became the latest addition to Gerard Houllier’s fast-improving side, one which had claimed an FA Cup, League Cup and UEFA Cup treble the previous season to raise optimism of a return to the glory years of the 1980s.

Functional and organised, but with a smattering of star-dust in the form of a Ballon d’Or-winning Michael Owen and a rampaging midfield rover by the name of Steven Gerrard, Houllier had attempted to fine-tune his squad into title-winners with the addition of an unknown Norwegian.

Making an immediate impact can be crucial to any new signing’s hopes winning over the fanbase and Riise wasted little time in letting the Liverpool – and wider Premier League – in on his not-so-secret weapon.

Riise marked his debut with a goal as Liverpool beat Bayern Munich to win the UEFA Super Cup, bursting into the box to net in a 3-2 win at the familiar surroundings of Monaco’s Stade Louis II.

Whether stationed at left-back or further forward down the flank, it became regular viewing to see Riise race down the wing with the indefatigable stamina of a man possessing three lungs.

Just four games into the season he scored his first league goal in a Merseyside Derby, running from deep inside his own half on the counter-attack. The retreating Steve Watson, left more twisted than a Rubix Cube, could only watch as Riise fired home under Paul Gerrard.

Riise’s relentless running became a trademark as he threw caution to the wind and joined the attack, but the abiding memories of the left-back are a series of net-busters from distance that evoke utter nostalgia.

Riise might have scored just 31 goals in a Liverpool shirt, but it’s difficult to remember a bad one.

The pièce de résistance of his Golazo collection came early on in his Reds career, as Manchester United made the short trip to face Liverpool at Anfield.

Six minutes before the half-time whistle, Didi Hamann nudged a free-kick in the direction of the lurking left-back and one sweet strike later saw Riise immortalised.

Riise’s rocket ripped past Fabian Barthez, spawning the “John Arne Riise, ooh ah, I wanna know, how you scored that goal” terrace chant that regularly reverberated around the ground throughout his time at the club.

It’s hard to recall a Premier League football being hit with such venom, reaching almost 70mph as it blasted past Barthez and almost uprooted the Anfield goal-posts.

The newly trademarked shirt-over-the-head celebration – adopted after his goal at Everton – followed and a cult hero had been born.

“It was just one of those times when things just went the way you hoped they would. I could never have dreamed of scoring that kind of goal,” the Norwegian said via ​Sky Sports.

“It was the first time I’d played against Manchester United, a team that had David Beckham and all of their big boys in it. I just told Didi Hamann to push the ball one-and-a-half yards and I smashed it. I didn’t even feel like I’d hit it but 15 years later I still get asked about it.

“I used to spend five or six hours a day practising my shooting technique when I was young so it didn’t come for free but sometimes things are just meant to be. It was a good goal, it’s followed me around ever since and it put me straight into the hearts of the fans.”

Riise’s repertoire of rockets continued to expand over the following seasons, his defensive duties often relinquished as he bombed forward ready to unleash the latest thunderbastard in his collection.

He remained a central figure as the Gerard Houllier era stagnated and made way for a Spanish revolution, as Rafael Benitez arrived from Valencia with a rising reputation and fresh ideas.

Riise matched his career-best haul of eight goals in all competitions during Benitez’s debut campaign in 2004/05, including this thumping effort in a 5-0 thrashing of West Brom.

The loose ball proved too tempting for a man with Riise’s reputation as he thundered in his second of the game in an emphatic win at The Hawthorns.

The season ended with a Champions League winners’ medal draped around his neck, having played his part in an unlikely triumph on the European stage.

Riise started the final win over AC Milan in Istanbul and teed up Steven Gerrard for Liverpool’s first goal of a thrilling comeback, as the Reds recovered from three goals down to upset the Italians at the Atatürk Stadium.

He was important again in Liverpool’s run to FA Cup success the following season. He scored three goals throughout the competition, including this blockbuster blast as Birmingham City were hit for seven at St Andrews.

When Riise hits them… they stay 𝗵𝗶𝘁.

A free-kick set Liverpool on their way to a 2-1 win over Chelsea in the semi-finals, before West Ham were edged on penalties in Cardiff after another thrilling final.

Riise’s game was built on fitness over finesse, but perhaps the endearing trait of his goalscoring gifts was their simplicity.

Rewatch each of these goals and there’s little that distinguishes them from one other. Afforded space to shoot, Riise often obliged and why not? He’d have been foolish not to given the ownership of a left foot that resembled a rocket launcher.

Spurs counted the cost of backing off the Liverpool left-back during a clash between the sides in 2006, Riise putting the finishing touch on a 3-0 win with a laser-like launch into the bottom corner.

When John Arne Riise hit them, they stayed hit 💥

Liverpool reached a second Champions League final under Benitez in 2006/07, though saw AC Milan exact revenge with a 2-1 win in Athens.

Riise had scored a stunner in the quarter-final win over PSV Eindhoven in the Netherlands, admitting afterwards the instinct that proceeded his latest special.

“I saw the keeper was a little bit more to the right,” he told TV3 after the game. “The ball bounced perfectly and all I had to do was smash it.”

Riise left Liverpool in 2008 to sign for Roma, remarkably failing to score in his final season at Anfield as his performances began to dip. After 348 appearances the Reds waved farewell to a fan favourite, one who had his faults but was never less than completely committed to the cause.

His career wound down with spells in the Italian capital, Fulham and a nomadic venture across divisions in India, Cyprus and his native Norway, before the boots of a true Golazo merchant were hung up for the final time.

Riise’s range was often wherever he chose and whilst frustration followed with the drives from distance that failed to reach their intended target, he departed English football with a host of memories to cherish.

Endless energy, a thunderous left foot, and perhaps the Premier League player we’d least like to include in a game of Red Arse.