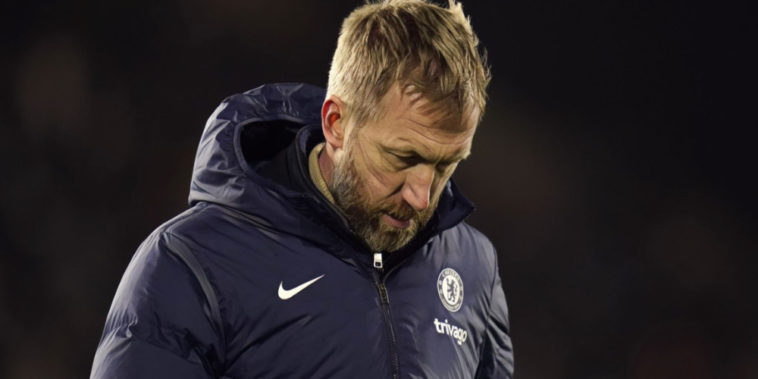 Chelsea parted with a significant sum to appoint Graham Potter in September, providing Brighton with a sizeable compensation package for their highly-rated head coach. Potter is struggling at Chelsea right now however, with just one win in nine games across all competitions having increased the pressure on his position.

He has been in the role for just four months, after a move which completed a remarkable rise from the fourth tier of Swedish football to one of Europe’s biggest clubs.

Whether he proves a success at Stamford Bridge remains to be seen, but the Blues’ board will want improvement on recent results and a return on their investment.

Potter features as we look at the five most expensive managers in football history.

Leicester spent £9m to bring Brendan Rodgers back to the Premier League in 2019, agreeing a compensation figure with Celtic for the Northern Irishman.

Rodgers had previous spells in the Premier League at Swansea and Liverpool, leading the latter to a runners-up finish after a memorable title race in 2013/14. He was sacked at Anfield in 2015 and later took charge at Celtic, where he won all seven domestic trophies available during a decorated spell in Scotland.

His success included twice reaching the Champions League’s group stage and a British record 69-game unbeaten run in domestic competition. The 2016/17 season saw Celtic become the first Scottish side to complete a top-flight season undefeated since 1899.

The lure of the Premier League proved too strong however, and Rodgers returned to the division. He led Leicester to consecutive fifth-place finishes in 2020 and 2021, with the latter of those successes coming alongside the Foxes’ first FA Cup title.

He remains in charge of Leicester, but has been unable to build on those triumphs across the past two seasons.

Chelsea believed the club had landed on the second coming of Jose Mourinho after appointing Andre Villas-Boas, who had previously worked as an assistant to the club’s former manager at Porto and Chelsea.

In just one season in charge Porto, Villas-Boas had become the most sought-after coach in Europe. The 33-year-old won a Primeira Liga, Taça de Portugal and Europa League treble during the 2010/11 campaign, with Porto completing the league season without defeat.

He replaced Carlo Ancelotti in west London, but endured an ill-fated spell in the Premier League. He was sacked just nine months after his appointment, after a 1-0 defeat by West Brom continued a run of just three Premier League wins in 12 games. Chelsea were fifth in the table at the time of his departure.

Vilas-Boas had a short spell in charge at Tottenham after leaving Chelsea, before taking positions at Zenit St Petersburg, Shanghai SIPG and Marseille. He has been without a club since resigning from his role with the latter in 2021.

Jose Mourinho became the most expensive coach in history when leaving Inter Milan for Real Madrid, as the Spanish side spent £13.9m to bring in the two-time Champions League winner.

Mourinho had led Inter Milan to the first treble in Italian football history during the 2009/10 season, beating Bayern Munich in the Champions League final as the Nerazzurri were crowned European champions for the first time since 1965.

Mourinho had the character and reputation to handle the pressures of the Bernabeu and across three seasons saw his side compete with Pep Guardiola’s Barcelona for major honours in a fierce El Clasico rivalry.

His greatest success came in the 2011/12 season, as Real Madrid won the title in record-breaking fashion. Mourinho’s men racked up a record 100 points to be crowned champions and scored an unprecedented 121 goals, ending the season with a goal difference of +89.

He departed in 2013 after a disappointing defence of their La Liga title the following season and returned to former side Chelsea.

The Bavarians parted with a fee of £17.4m to land the RB Leipzig coach, who has developed a growing reputation since becoming the youngest head coach in Bundesliga history, aged 28, when he took charge of Hoffenheim in 2016.

One of the best young managers in the world, and not short of a celebration too 😁

After moving to Leipzig three years later, he led the club to the Champions League semi-finals during his debut campaign and earned admirers for his high-intensity football and faith in young talent.

Nagelsmann’s debut campaign saw Bayern crowned champions – a tenth Bundesliga crown in succession – but there was disappointment in Europe as the club crashed out to Villarreal in the last eight of the Champions League.

Europe will be the barometer of Nagelsmann’s success, with Bayern well established as the dominant domestic force.

Graham Potter’s arrival at Chelsea is the most expensive managerial appointment in history.

Chelsea secured Potter’s services after a £22m compensation package was agreed with Brighton, who were reluctant to lose the coach who had led the Seagulls to their highest-ever Premier League finish in 2021/22.

Potter had impressed during an unusual route to the top level of management and Chelsea’s new owners were convinced that the 47-year-old was the right man for their project.

After a bright start the club’s fortunes have faltered fast however, dropping to tenth in the Premier League following their worst run of Premier League results in 27 years.

It’s now one win in nine games across all competitions for Chelsea, who are out of both domestic cups and ten points adrift of the Champions League places. The pressure is already on Potter to turn the club’s season around.