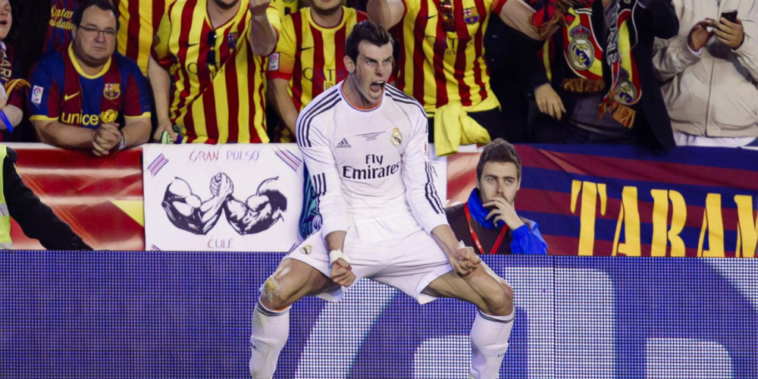 Gareth Bale this week announced his retirement from football, bringing an end to the career of one of British football’s greatest players.

The Welsh winger has called time on his career as his nation’s record goalscorer and appearance maker, while he will be remembered as a Premier League great and one of Britain’s greatest exports after a decorated career at Real Madrid.

Bale was a two-time winner of the PFA Player of the Year award during his time at Tottenham, before winning five Champions League trophies among his honours after a then-world record move to the Bernabeu in 2013.

Bale was beginning to emerge as one of the Premier League’s most influential talents during the 2010/11 campaign, a season which saw that breakout performance against Inter Milan in the Champions League.

The second fixture of the Premier League season saw Bale score both goals in a 2-1 win at Stoke, the first a moment he knew little about as the ball rebounded off him and into the goal for the opener.

His second, however, was a moment of genius.

Bale watched Aaron Lennon’s dinked delivery all the way onto his trusted left boot, stretching high to connect with a sumptuous sliced volley with arced perfectly into the far corner.

Two months later on the Champions League stage, the buccaneering Bale did this against the European champions in the San Siro and a star was truly born.

Bale was named as the PFA Player of the Year for a first time during the 2010/11 season, before claiming the award for a second time two seasons later.

He became just the third player – after Thierry Henry and Cristiano Ronaldo – to win the award on two occasions, following a 2012/13 season that retains a special place in the memory.

Bale was unstoppable during the course of the campaign, as he scored 21 league goals to fire Spurs’ push for Champions League qualification. He scored a record-breaking nine goals from outside the box, with few better than this stunning last-minute winner at West Ham.

An entertaining encounter at Upton Park saw the scores level at 2-2, when Bale picked up possession in a central area some distance from goal. He unleashed an arrowed finish into the top corner, sealing all three points for Spurs in stunning style.

Bale’s final goal for Spurs saw him add to his catalogue of special strikes for the club, bending home this brilliant effort to snatch a late win against Sunderland.

It was a goal that proved in vain as Spurs missed out on the top four on the final day, but was a fine farewell for Bale who at this stage seemed destined for bigger things.

As the goalless game ticked into the stoppage time, Bale jinked inside from the right flank before unleashing a thunderous strike which flew past Simon Mignolet in the visitor’s goal.

Real Madrid won the race to sign Bale in the summer of 2013, securing a then-world record £86m deal to land the Spurs star.

His debut season ended with silverware and a key contribution, as Bale scored crucial goals in the Copa del Rey and Champions League finals.

The former was a stunning individual effort as Los Blancos beat arch-rivals Barcelona to lift the Spanish Cup, with Bale bursting from inside his own half to score a winner five minutes from time.

Gareth Bale’s iconic goal against Barcelona in the Copa Del Rey is a cult in itself! Iconic. 🔥

The goal featured the kind of lung-busting athleticism that defined Bale’s game at his very best, with the winger leaving Marc Barta in his wake despite being forced to take the long route off the side of the Mestalla pitch.

It was a breathtaking burst from Bale, who secured the first silverware of his career with a memorable individual moment.

Bale was a surprise omission form the starting side as Real Madrid took on Liverpool in the 2018 Champions League Final, with the Spanish giants in pursuit of a third consecutive European crown.

Sadio Mane had levelled Karim Benzema’s opener for Real Madrid, before Bale’s introduction from the bench transformed the game.

Introduced for Isco after 61 minutes, he needed just three more to produce one of the most iconic goals in Champions League history. Marcelo’s cross fell behind Bale, who adjusted his body to score a sensational overhead kick that left Loris Karius with no chance.

It was a stunning goal that drew gasps from those watching on in Kyiv and on television back at home, a piece of brilliance that will remembered for decades to come.

Bale added a second with a swerving effort from distance, as he secured a fourth Champions League title in just five seasons at the Bernabeu.

He remains the only man to have scored a winning goal in two Champions League finals.