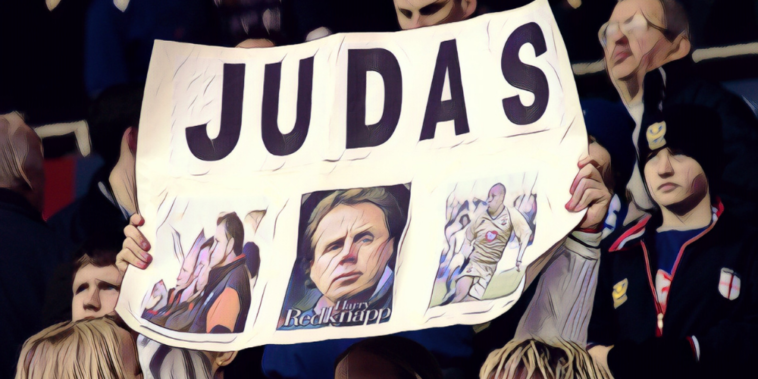 Rafael Benitez has emerged as the shock front runner to take charge at Everton, with the former Liverpool manager understood to have held talks with the club over the vacant role.

Benitez’s arrival would certainly raise eyebrows given his previous spell on the opposite side of the city, the Spaniard having spent six successful seasons at Liverpool, winning the Champions League and FA Cup amongst his honours.

The 61-year-old remains a popular figure at Anfield and the reaction to his potential appointment remains to be seen on both sides of the Merseyside divide.

Benitez would not be the first top-flight manager to change allegiances however, and following the news of his emergence as a leading candidate for Everton, we look at five previous coaches to cross English rivalries.

George Graham established himself as an Arsenal legend during nine seasons in charge of the Gunners, becoming the club’s most successful manager since the legendary Herbert Chapman in the 1930s.

Graham had represented Arsenal as a player before his appointment as manager in 1986, where he helped lead his former side out of a lean period and into an era of silverware success.

Graham led Arsenal to two league titles – the first won in the most dramatic of fashion after a 2-0 final day win over title rivals Liverpool at Anfield – two League Cups, an FA Cup and UEFA Cup Winners’ Cup, his side built on a miserly defence that has retained a notorious reputation three decades on.

Responsible for signing iconic figures including David Seaman and Ian Wright, Graham oversaw a period in which he transformed the Gunners from a side going nowhere into major contenders, though his reign came to an abrupt end after he was sacked for accepting illegal payments.

He moved on to Leeds, before causing controversy by joining Tottenham in 1998, with neither side of the north London fanbase particularly pleased by his appointment.

Graham led Spurs to League Cup success during the 1998/99 season – their first trophy since 1991 and one of only two won in the past 30 years – but failed to secure a finish higher than 10th in the Premier League.

He was sacked in 2001 and has not returned to management since, with Graham holding the unwanted distinction of being sacked by both Arsenal and Tottenham.

Harry Redknapp later admitted he didn’t realise the extent of the hate between Portsmouth and Southampton, having quit the former to join their arch-rivals in 2004.

Redknapp had become Director of Football at Portsmouth in 2001, before taking the managerial reins and leading the club to promotion to the Premier League for the first time during the 2002/03 season.

He kept Pompey in the top-flight during that maiden Premier League voyage, but fell out with owner Milan Mandarić over the appointment of Velimir Zajec as Director of Football and quit the club – only to join Southampton just two weeks later.

The move was understandably met with furious anger from the Portsmouth supporters and Redknapp admitted in an interview with FourFourTwo that he did not realise the magnitude of his decision or the South Coast rivalry.

“I fell out with Milan Mandaric at Portsmouth. I’d got into my car to drive home one day, and suddenly I had four phone calls from the press saying, ‘I see you’ve got a director of football coming tomorrow?’

“The next day, I got to the training ground and this guy was there, Velimir Zajec. I went back to Milan, who’d told me, ‘No one’s coming in.’ We had a row and I quit.

“Soon after, I got a call from Southampton. I lived down here, so why shouldn’t I work? It was a crazy move. I didn’t realise the hate between them.”

The move to relegation-threatened Southampton failed to work out, with Redknapp failing to keep the club in the Premier League as the Saints were demoted to the second tier at the end of the 2004/05 campaign.

Redknapp was greeted with boos, banners and Judas chants upon his return to Fratton Park that season, as Portsmouth ran out 4-1 winners to pile the pressure on the new Saints manager.

Incredibly, just over a year after quitting the club, Redknapp made a shock return to Portsmouth, guiding the club away from relegation troubles and to a ninth-placed finish the following campaign – the club’s highest since the 1950s.

He won the FA Cup in 2008 – the club’s first major silverware since winning the same competition 69 years earlier – and was later handed the freedom of Portsmouth, completing quite the status turnaround.

Alex McLeish caused controversy in the Midlands after swapping Birmingham for Aston Villa, the former Rangers and Scotland boss having spent four seasons with Birmingham before jumping ship following their 2011 relegation – to join the club’s cross-city rivals.

McLeish had enjoyed a successful period with the Blues, earning an instant promotion to the Premier League during his first full season in charge, before an impressive ninth-placed finish on their return to the top tier.

The 2010/11 season saw Birmingham become the first team in Premier League history to win a major trophy – their first since 1963 – and be relegated in the same season after winning the League Cup, with McLeish deciding he did not fancy another stint in the second tier.

The Scot instead took the invite from Aston Villa to become their new manager, though struggled for acceptance from the fanbase and dealt with the loss of several key players during a solitary season in charge.

The unfortunate thing about being in the public eye is that comments can often come back to haunt you.

That has certainly been the case for Steve Bruce at Newcastle, whose previous tenure at Sunderland has not been forgotten from the Magpies’ support, despite his admission that the role at St James’ Park has long been a dream.

“Managing Newcastle has never been my dream.

“This opportunity at Sunderland has everything I want – the infrastructure, the fanbase, an ambitious chairman and an ambitious new owner.

“I don’t need anything else – I have everything here. Everything you look for as a manager is here at Sunderland.”

Fast forward a decade and Bruce had swiftly changed his tune, having been unveiled as the new manager of Newcastle – the club he supported as a youngster.

“To be given the opportunity now, I’m like any other Geordie. I’ve lived the dream.

“If you can’t play for them then of course, if you’re a Geordie, what better thing than to take the No 1 seat.”

It’s easy to see why he’s far from popular on either side of the divide, despite remaining in charge of a Newcastle side lacking ambition under the ownership of Mike Ashley.

Jose Mourinho was a breath of fresh air for the Premier League when he arrived as Chelsea manager in 2004, the charismatic coach having recently guided unfancied Porto to Champions League success.

The self-proclaimed ‘Special One’ quickly told English football he was the man to lead billionaire-backed Chelsea, overseeing the most successful period in the west Londoners history with back-to-back league titles and five major honours across just three-and-a-half seasons.

Mourinho’s reign ended by mutual consent following a falling-out with owner Roman Abramovich, though he returned to Stamford Bridge in 2013 and won a Premier League and League Cup double in 2014/15.

The bubble soon burst once again however, and Chelsea fans were far from pleased when the Portuguese decided to take charge at silverware rivals Manchester United following the conclusion of his second spell.

However, the worst was still yet to come.

Mourinho took the vacant role at London rivals Tottenham following his sacking at Old Trafford, despite having previously stated he would never take the job given his ‘love’ for the Chelsea supporters.

It’s funny how a few pound signs and Premier League sackings can change a man’s perspective.

Read Also – Five of the most iconic Euros goals ever