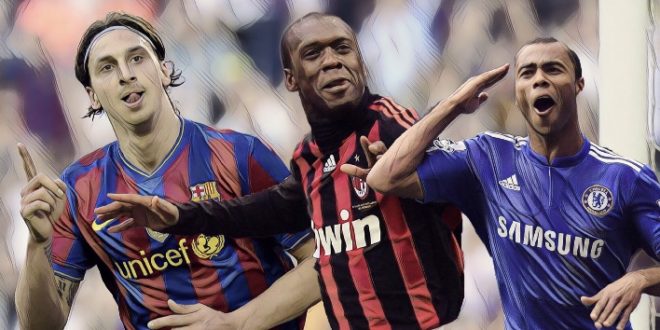 Harry Diamond 05/08/2019 Five of the Best, Opinion/Features Leave a comment

A cash for player transaction is the norm when it comes to football transfers, though throughout history we’ve seen a series of high-profile swap deals.

Manchester United and Juventus are the latest sides to propose such a deal, with Paulo Dybala and Romelu Lukaku the men to be exchanged.

Ensuring both clubs get value is complex, and there has often been one side who gets the better end of the deal.

We’ve taken a look back at some of football’s famous swap deals, with varying degrees of success…

Italian giants Inter Milan were interested in Real Madrid’s Chilean forward Ivan Zamorano, the forward having scored prolifically as the Spanish side secured the La Liga title in 1995.

Inter proposed a deal of £1m plus the inclusion of Brazilian left-back Roberto Carlos, who had been with the club just a season since moving from Palmeiras.

Real would be the winners of this particular swap, Carlos heading to the Bernabeu in part-exchange, establishing himself as one of the greatest full-backs of all-time and winning a host of major honours.

Zamorano failed to hit double figures for league goals in any of his five seasons at Inter, his most memorable moment arguably putting a plus sign between the one and eight on his shirt after seeing the number nine handed to Ronaldo.

Another swap deal involving Inter, this time directly with rivals AC Milan. Coco was an Italian international and fine defender, with Inter prepared to offload Dutch midfielder Seedorf in exchange for the full-back.

The move proved to be a disaster for Inter, Coco making just 26 league appearances in five seasons with the club, his time blighted by injury problems.

By contrast, Seedorf would prove a huge hit in the red and black of Milan, making over 400 appearances and twice winning the Champions League under Carlo Ancelotti.

A high-profile transfer deal that caused animosity between London rivals Arsenal and Chelsea, England international Cole heading to Stamford Bridge for a fee of £5m plus William Gallas in 2006.

Chelsea and Cole had already been fined for holding illegal meetings prior to the deal, whilst Cole wanted out after what he felt was a below-par contract offer from the club.

Gallas also wanted out at Chelsea, bizarrely threatening to score own goals should he not be allowed to leave the club, a claim he has since denied.

A deal was struck, Arsenal fans voicing their anger at the perceived betrayal from Cole. To say the deal proved better for Chelsea is perhaps an understatement, Cole cementing his place as arguably the Premier League’s greatest ever left-back and winning every major honour before leaving for Roma in 2014.

Gallas was undoubtedly a fine player, though he is perhaps not remembered fondly in North London. He famously inherited Dennis Bergkamp’s number 10 shirt despite being a centre-back, fell out with teammates whilst captain and memorably sulked on the pitch following a draw with Birmingham.

What is it with Inter Milan and swap deals? Pep Guardiola brought unprecedented success to Barcelona, but this was a deal which really backfired for the all-conquering Spaniards.

Barcelona had won the ‘treble’ in 2009, with Cameroon forward Eto’o having been a key component in two Champions League winning sides at the Nou Camp.

In a bid to further improve, Barcelona sought a move for enigmatic Swede Ibrahimovic, who had scored prolifically at the San Siro since joining from Juventus in 2006.

Barcelona’s bid was a mega-money offer, £35m plus Eto’o, who was regarded as one of the world’s leading forwards in his own right.

Inter snapped their hands off and would prove the major beneficiaries of this deal, as Eto’o would form part of the side which won the Champions League the following season under Jose Mourinho, completing Italian football’s first-ever treble.

Ibrahimovic struggled to settle in Spain and clashed with Guardiola. Despite scoring 21 goals in his first season, he would return to Italy with Milan the following year.

Arsenal star Alexis Sanchez had established himself as one of the Premier League’s leading lights, the forward having been a stand-out performer since moving from Barcelona.

With the Chilean’s contract running down at the Emirates, Premier League rivals Manchester United capitalised, striking a deal to bring Sanchez to Old Trafford.

The deal would involve a straight swap with Armenian midfielder Mkhitaryan, who had struggled to replicate the form he had previously shown at Borussia Dortmund in the Premier League.

United seemed to be getting the better end of the deal, signing one of the division’s finest players in a simple part-exchange for an under-performing star.

How they were wrong.

Sanchez’s move has been nothing short of disastrous, scoring just three league goals since his high-profile arrival. His record-breaking £500,000-a-week contract has also caused problems, with United having struggled to negotiate new deals with several squad members.

His huge wages have seen United struggle to find suitors for the unwanted star, who looks a shadow of his former self.

Mkhitaryan’s move to Arsenal has not wholly been much better, the 30-year-old continuing to deliver inconsistent performances since moving to the Emirates.