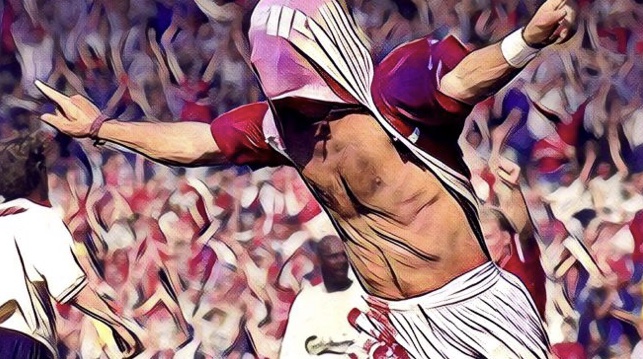 There’s nothing like the buzz created by a new signing. It’s all potential at that point, it’s all rumours and whispers and YouTube highlights packages that make the player look like a genius, who is going to herald in a new dawn for the club.

It’s even better then when the player actually delivers, so let’s take a look at Five of the best Premier League Debuts!

It’s hard to believe but Middlesbrough weren’t always the most boring team in the history of football. They used to score goals and sign exciting players. Even when they got relegated they had something about them.

Ravanelli, known as the White Feather, signed for Boro from Juventus for some reason, and immediately made an impact which included the signature celebration that every kid who grew up in the 90’s did in the park – even long after he had left.

Ok, so this is one that didn’t quite work out but it has to go down as one of the most exciting Premier League debuts of all time. Near the end of the season, Manchester United needed a win against Aston Villa to go top of the table. The game was nearing it’s end and as they did under Ferguson, United were really pushing for the winner. On came unknown youth player Federico Macheda. The rest is history. Just like Kiko’s subsequent career unfortunately which could never live up to that incredible beginning.

What was it about the 90’s and class celebrations? You can’t be doing  those choreographed dances that Lingard and Pogba do, or Kane and Alli’s mental handshake thing, but you could do the Sharpy Shuffle, you could do the Ravanelli and everyone’s done a Klinsmann at least once.

Klinsmann came to England with the reputation of being a diver, so how better to answer his critics then incorporating a dive into his celebration. The signature move made it’s debut the same day the German international first started for Spurs in what was a rollercoaster day for the player.

So it turns out Sergio Aguero is really good at football. Who knew? Apparently some people were questioning his ability to cut it in England when he first signed for Manchester City back in 2011. £38m? Mental money for a player with no Premier League experience. He came on in the 59th minute against Swansea and soon showed what he was all about.

No-one really paid any attention when Swansea signed Spanish striker Michu from Rayo Vallecano back in 2012, but it wasn’t long until every fantasy football manager worth his salt had him in their team. He managed 18 goals in his first season including this cracking brace on his debut.