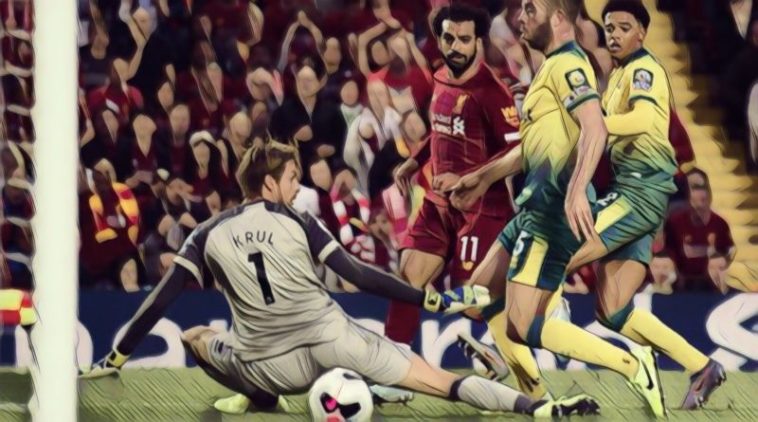 Jurgen Klopp was left delighted with Liverpool’s ‘super football’ as they kicked the Premier League season off with a convincing 4-1 win over Norwich.

Despite the look of the scoreline, the newly promoted side actually played some decent football at times, but their insistence of playing the same brand of football that got them promoted was their ultimate downfall.

The reigning European Champions took the lead early on through a Grant Hanley own goal, before Mohamed Salah quickly made it 2-0.

Goals from Virgil van Dijk and Divock Origi saw Liverpool take a 4-0 lead before the half time interval, with Teemu Pukki netted a second half consolation for the Canaries.

Speaking after the game, Reds boss Jurgen Klopp praised Daniel Farke’s side for their ‘cheeky’ approach to the game, but thought his players produced some ‘super football’ – especially considering the fitness levels at this early stage of the season.

“For 60 minutes we looked very sharp, then we have to control the game a bit more. Norwich have all my respect. They stayed cheeky, they enjoyed their football,” Klopp told BBC’s MOTD.

“At the start of the second half we could have scored a fifth or sixth goal, then Norwich scored. After that we were never in danger but had to work hard to keep the score what it was.

“The players had a break (over the summer). For the body it was long enough, nobody asked for longer, so they didn’t lose a lot of their physical standards. We have to be a bit smart for the next two games, we have to make a few decisions and try to win both of those games, which will be difficult.

“But tonight is positive. For 60 minutes we played super football and the last half an hour is normal in the early stages (of the season).”