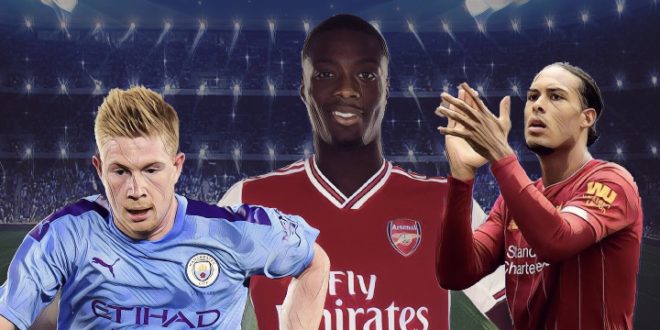 Predicting the 2019/20 Premier League Team of the Year

With our beloved Premier League about to return, fans and pundits up and down the land will be making their predictions for how they think things will play out during the 2019/2020 season.

Anybody who’s partaken in pre-season predictions will tell you it’s a mug’s game, and is a sure-fire way to make yourself look stupid further down the line.

However, they’re a bit of fun nonetheless, so we’ve decided to look into our crystal ball and try to predict the entire 2019/20 Premier League team of the season. But first, let’s set the scene a bit…

It’s early June 2020 and Manchester City are Premier League champions for the third year in a row after collecting a record 101 points, finishing a whopping 19 points ahead of second-place Liverpool.

Jurgen Klopp’s Reds made it to their third successive Champions League final, but lost to a revenge thirsty Lionel Messi inspired Barcelona. Liverpool did though pick up the second piece of silverware of their German coaches reign after beating Chelsea in the FA Cup final.

Frank Lampard’s Blues were tipped by many to struggle due to their transfer ban, but they enjoyed a fine campaign, finishing third in the league, reaching the FA Cup final and winning the Carabao Cup.

It was a season of heartbreak on the trophy front for Spurs once again, who despite securing Champions League football by finishing fourth, lost in the Carabao Cup final to bitter rivals Chelsea.

Arsenal finished fifth and won the Europa League, while it was another disastrous season at Manchester United with Ole Gunnar Solskjaer sacked in March and Ed Woodward now said to favour appointing a big-name manager and embarking on a Galactico style spending spree to restore the Old Trafford outfit to their former glories.

Despite losing out on the Golden Glove to Liverpool’s Alisson for the second season running Brazilian ‘keeper Ederson walks into our team after a simply sensational season for Premier League champions Man City. Already regarded as the best long-range passer in world football Ederson took his game to another level midway through the season when he began taking free-kicks and penalties due to a mini injury crisis at the Etihad.

The heavily tattoed ‘keeper would finish the season with seven goals and nine assists, including a goal of the season effort against Sheffield United, when he ran the length of the pitch before twacking a thunderbolt into top bins from 25 yards out.

Ederson’s now customary goal celebration is to do a double front flip before knee sliding and lifting up his jersey to unveil a picture of his idol, Paraguayan legend José Luis Chilavert.

Robertson continued to show that clubs don’t always need to spend megabucks to secure top-class talent, by putting in another string of top-class performances this season. The 26-year-old full-back is rock solid defensively and once again reached double figures in assists, cementing his reputation as a world-class left-back.

Already hugely popular in his homeland, the Scotland captain’s popularity north of the border has reached new heights after he stuck the middle finger up at the Sugar Tax, pledging £50k to the ‘Save Real Irn Bru’ campaign.

Dutch captain Van Dijk is now unquestionably the worlds best defender and the leader of a Liverpool backline that conceded the least amount of goals in the Premier League for the second season in a row. Imperious during the Reds run to a third successive Champions League final and a bullet header to win the FA Cup final, Big V is now on his way to not just being a Liverpool legend, but one of the greatest players the English top-flight has ever seen.

There are unconfirmed reports that Van Dijk has been approached to become the first black James Bond, although he is said to be holding out for the lead role in the latest Shaft remake.

Big Shane edges out Slab Head Maguire who impressed during his first season at Old Trafford, but the Irishman almost single-handedly kept the Seagulls in the Premier League for a third successive season. Duffy specializes in the old school style of ‘body on the line’ defending and his towering threat from set-pieces was crucial to Graham Potter’s sides top-flight survival.

The 28-year-old also took his game to the next level in terms of his distribution from the back this season and it’s no surprise that Man City, Real Madrid, and Barcelona are now locked in a battle for his signature. The big Derry man is said to favour a move to Spain after something of a public backlash in the UK, once it emerged that Meghan Markle had slid into his DM’s, leaving poor Prince Harry devastated.

One of the few bright spots in yet another utterly forgettable season at Old Trafford in which the Red Devils finished sixth for a second successive season. £50 million summer signing Wan-Bisakka has already become a firm fan favourite at Old Trafford, leading the Premier League in a whole host of defensive statistics. The 21-year-old’s form has been rewarded at international level after winning a place in Gareth Southgate’s England squad for Euro 2020 and he was also voted both fans and players POTY.

Despite Ole Gunnar Solskjaer being sacked in early March and replaced by Nicky Butt on a caretaker basis until the end of the season, Wan-Bisakka’s performances have remained at a high level and the young defender has stood out as one of the few transfers United have got right in the post-Ferguson era.

Carlo Ancellotti is expected to be announced as the clubs latest manager soon, and Executive Vice Chairman Ed Woodward has told the veteran Italian that he is confident of sealing deals for Sergio Ramos, Thiago Silva, Marcelo, Kylian Mbappe, Neymar, and Jadon Sancho during the summer transfer window.

Returned to his favoured holding role after a season messing about as an attacking midfielder under Maurizio Sarri, Kante has re-established himself as the world’s best midfield destroyer. The France international put in a series of sensational displays during a hugely encouraging first season in charge at Stamford Bridge for Frank Lampard.

Now that Chelsea’s transfer ban is over, and Kante is back to his very best, many are tipping the Blues vibrant young side to be the team most likely to push Man City for the Premier League title next season.

Another Frenchman who’s been ripping up Premier League midfield’s is Spurs record buy Tanguy Ndombele. The former Lyon man has taken to life in English football like a duck to water, and his combination of athleticism, tough tackling, and incisive passing has inevitably led to comparisons with the legendary Patrick Vieira.

Bossed the midfield during a famous Champions League quarter-final win over Juventus, a game in which Ndombele nearly broke the internet after booting Cristiano Ronaldo up and over one of those ‘Priceless’ advertising hoardings.

After an injury-ravaged 2018/19, Kevin De Bruyne returned to full fitness and top form this season, breaking Thierry Henry’s record for assists in a single Premier League season. City boss Guardiola eventually decided to install De Bruyne as the Etihad outfit’s captain after the departure of his countryman Vincent Kompany, and the Belgian playmaker revelled in the role, winning the PFA POTY award as City romped to a record-breaking 101 point Premier League title triumph.

Tin Tin lookalike De Bruyne remains a wonderful riposte to the Youtube Generation of footballer, who seem more concerned with executing flick and tricks for the camera than actually picking the best option for their team. De Bruyne’s ruthless efficiency when it comes to putting scoring chances on a plate for his teammates, has left fans and pundits in awe throughout the campaign and he is now on his way to becoming a Premier League legend.

Arsenal caught everybody by surprise by signing highly-rated attacker Pepe from Lille in the summer, and the Ivory Coast international soon went about showing everybody why so many of Europe’s top clubs were scrambling for his signature.

Playing off the right of Unai Emery’s attack Pepe impressed with his speed, trickery, and finishing ability, scoring 20 goals and providing 12 assists during his maiden campaign in English football. Pepe would form a lethal combination with fellow Gunners attackers Pierre-Emerick, and Alexandre Lacazette, with the talented trio scoring a sensational 82 goals across all competitions.

Sadly for Pepe, his first season at the Emirates did not bring much success on the domestic front, with Arsenal finishing fifth in the table, mostly down to a Shkodran Mustafi and David Luiz inspired backline that conceded a record 67 times. Arsenal did though win the Europa League after beating Napoli 3-1 in the final, a game in which Pepe scored a well-taken brace.

French striker Haller’s £45 million move from Bundesliga outfit Eintracht Frankfurt is regarded by many as the signing of the season, after the big frontman struck 21 top-flight goals as Manuel Pellegrini’s side finished seventh. Haller combines the power and aerial ability you would expect from a traditional target man, with a hugely impressive level of skill and trickery.

A cult hero in the East End after scoring in famous wins over London rivals Chelsea, Arsenal and Spurs, West Ham‘s only concern now is holding onto the lethal striker. Haller gave an interview with L’Equipe after being included in France’s Euro 2020 squad in which he admitted he is looking for a new challenge next season and wants to play Champions League football. Although he poured scorn on links to Man United, insisting that he wants to move to a club with a realistic chance of winning trophies.

England captain Kane managed to stay fully fit for almost the entire season and showed his class by plundering a Premier League record 33 goals. It was a superb season on a personal level for Spurs talismanic striker – which is all strikers really care about – with the Walthamstow born hitman bagging a sensational 47 goals in all competitions.

However, it was also another season of heartbreak in North London, with Spurs losing the Carabao cup final to London rivals Chelsea and exiting both the FA Cup and Champions League at the semi-final stage.

Our predicted Premier League TOTW is brought to you in association with our friends at Carling, who’ve just launched a superb new inter lockable glass that allows you to carry four pints easily. Now if that’s not an innovation we can all get behind, we don’t know what is!