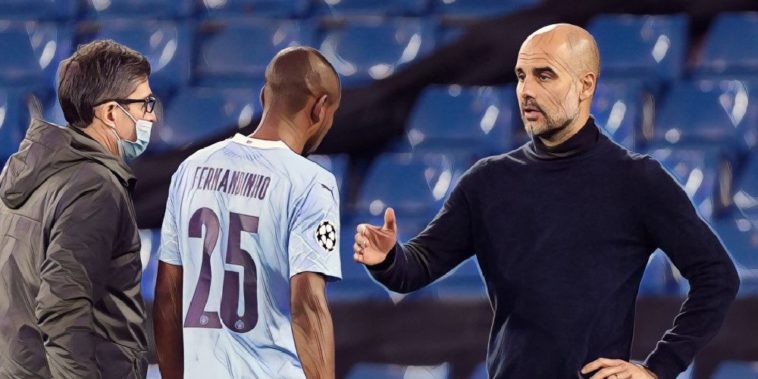 Fernandinho was substituted just minutes after coming on as a late substitute during City’s 3-1 victory over Porto in their Champions League group stage opener, with Guardiola now confirming that the Brazilian midfielder is set for a minimum of a month on the sidelines.

The 35-year-old joins a host of players currently on the treatment table and the Man City boss has bemoaned his side’s ‘demanding’ schedule, with the club set to face a further three fixtures in the next nine days.

“It is bad news with Fernandinho,” Guardiola said at his post match press conference. “He has a problem in his leg, he could be out for four or six weeks.

“It’s so demanding the schedule and we need all the players. It’s a short recovery. We did the perfect performance in the second half tonight. Porto are a really good team. It’s nice to win games while suffering.”

City took an early lead at the top of the group after coming from behind to defeat the Portuguese side at the Etihad, Sergio Aguero’s penalty cancelling out Luis Diaz’s impressive individual opener for the visitors, before an Ilkay Gundogan free-kick and Ferran Torres completed the comeback.

Fernandinho’s injury soured an otherwise positive night, the midfielder joining Kevin De Bruyne, Gabriel Jesus, Aymeric Laporte and Benjamin Mendy in being sidelined through injury, whilst Nathan Ake was deemed unfit to face Porto due to a niggling groin problem.

Speaking following the clash, goalscorer Gundogan admitted the mounting injury problems were a concern as City bid to find their form in the early weeks of the season.

“If I am being honest, we are struggling a little bit with Fernandinho going off,” Ilkay Gundogan told BT Sport.

“We have players in different conditions, I am not 100 per cent there because of (contracting) Covid. We are all in different moments, and it will not end for a while, but we have enough quality players so Pep will not have a problem to pick players.”