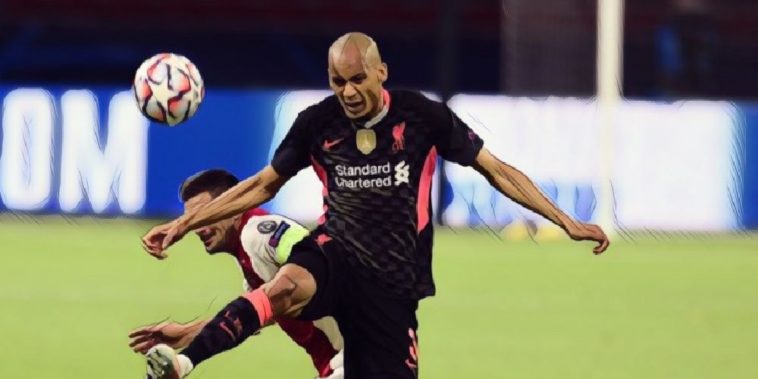 Rio Ferdinand has hailed Liverpool’s Fabinho as a ‘top operator’ following the midfielder’s performance in an unfamiliar centre-back role during the club’s 1-0 victory at Ajax.

Liverpool began their Champions League group stage campaign with a hard-fought victory over the Dutch side in Amsterdam, a bizarre own goal from Nicolas Tagliafico ensuring the Reds returned home with all three points.

Jurgen Klopp’s side headed into the clash amid the blow of Virgil van Dijk’s potentially season-ending knee injury suffered in last weekend’s Merseyside Derby, whilst their centre-back options were further depleted following the absence of Joel Matip.

Fabinho was once again tasked with filling in at the heart of the defence and the performance of the Brazilian – including one outstanding goal-line clearance – won praise from former England defender Ferdinand, who hailed an accomplished performance from a ‘top operator’.

“He’s been the best player when he plays there,” Ferdinand told BT Sport.

“This guy is a top operator and he played right back at Monaco as well so he knows how to defend.

“But he’ll be judged on it now because he’ll have a chance to play there for a sustained period. He has read the game really well today. It’s about him starting to establish a relationship with Joe Gomez.

“The problem he has got is he is filling the boots of the best defender in the world and Gomez as well, there will be pressure on both of them and if they can do it.

“After the week they’ve had with injuries, it was just what the doctor ordered. Three points and a clean sheet, Klopp will be going back a happy man.”

Fabinho discussed his new role in the side and spoke of the importance of replacing Van Dijk’s leadership in the backline, admitting he will do his ‘best’ to stand in for the inspirational Dutchman during his prolonged spell on the sidelines.

“Tactically, I have to be ready for the long balls and try to organise the team,” he said to Viaplay. “It’s not easy but I have to do a little of what Virgil always does – talk to the team and try to be a leader.

“Of course I am not really but I will do my best. It was very important for me and for the team to keep the clean sheet today for confidence.

“The manager said to me I have to talk more to the team, to try to organise the team. Sometimes, a little bit I was like ‘second ball’, ‘be ready’ to try to press good. I try to be in this role as well, I try to do my best.”