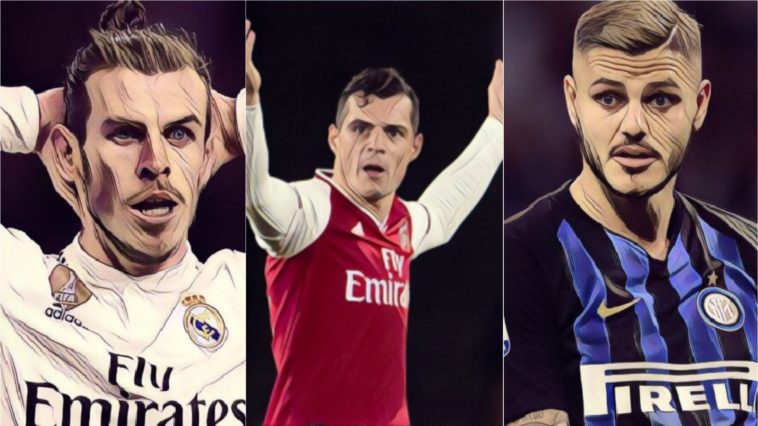 Granit Xhaka’s popularity at Arsenal has reached a new low, the much-maligned midfielder’s angry reaction to the crowd’s jeers during Sunday’s draw with Crystal Palace sparking outrage amongst the club’s support.

Xhaka’s ill-advised decision to cup his ears and mouth “f*** off” to his own supporters has made his position at the club uncertain, not least because he was appointed club captain ahead of the new campaign.

The Switzerland international is not the only player to have suffered a difficult relationship with his own supporters, however, and he is likely not to be the last.

Five famous footballers who were hated by their own fans:

A world-record signing who has helped his side to four Champions League titles in six seasons, including performing match-winning antics in two of those finals, Gareth Bale must be left wondering quite how it turned so sour for the Welshman at Real Madrid.

Having established himself as arguably the finest player in the Premier League, Bale headed for Spain in 2013 in a record-breaking move and success soon followed. The former Tottenham Hotspur star ended his first season by helping Real to La Decima, scoring in the club’s final success over city rivals Atletico Madrid.

A host of major honours, including three consecutive Champions League triumphs have followed, Bale producing a stunning performance off the bench to score twice and beat Liverpool in the 2018 showpiece in Ukraine.

However, the Welsh winger has fallen out-of-favour under manager Zinedine Zidane who has been desperate to offload the player, whilst he has been targeted by fans as a scapegoat during the club’s worst performances in recent times.

Such has been Bale’s unpopularity at the Bernabeu that the club tried to force him to move China, whilst the Spanish side’s supporters have attacked his car and chanted ‘desagradecido’, the Spanish word for ungrateful, as he has arrived for training.

His reluctance to leave – his current contract worth £600,000-a-week running until 2022 – has made him further disliked and his future at the club remains uncertain.

The former England defender was part of Aston Villa‘s dismal relegation campaign four years ago, producing a series of uninspired performances as the Midlands side dropped into the second tier for the first time in over two decades.

Many of the side which finished rock bottom of the division were targeted for jeers by the club’s supporters, though Lescott made himself especially unpopular following a pair of rather idiotic incidents.

Following a 6-0 defeat to Liverpool in February, Lescott reacted to the club’s biggest home defeat in 81 years by tweeting a picture of his luxury Mercedes just two hours after the full-time whistle, further fracturing his relationship with an incensed fanbase which had seen their team slump to eight points from safety following a chastening defeat.

Lescott would somewhat embarrassingly claim he ‘pocket tweeted’ the image by mistake, though the common consensus was that this was a middle-fingered salute to the Aston Villa boo boys.

The defender would later described the confirmation of the club’s early relegation as a “a weight off the shoulders”, a statement which unsurprisingly did little to boost his popularity.

Remember him? Probably not.

A famous face in only the sense that he was a professional footballer at one of world football’s biggest clubs, the former Cameroon goalkeeper endured an all together forgettable time during a three-year spell at Liverpool, making just seven first-team appearances all of which were in cup competition.

However, Itandje is remembered for all the wrong reasons on Merseyside for one particular incident. During the club’s memorial service for the twentieth anniversary of the Hillsborough disaster, Itandje was pictured laughing and behaving inappropriately during the service.

He was subsequently suspended by the club and would never play another game at any level in a Red shirt before leaving for Greek side Atromitos, while he also claimed to have been threatened by the club’s supporters following the backlash.

Immensely talented, though a player who endured somewhat of a love-hate relationship with the Inter Milan support.

The Argentine striker has established himself as one of the deadliest forwards in Italian football and was appointed as Inter’s club captain at the age of just 22, though despite his prolific returns in front of goal his relationship with his own fans soon deteriorated.

During a disappointing 2014/15 season in which Inter finished 14 points adrift of Champions League qualification, Icardi was involved in an angry altercation with the Inter ultras, who threw his shirt back in his face after he had given it to the crowd following a 3-1 defeat to Sassuolo.

It was, however, Icardi’s recollection of the events in his autobiography which sparked controversy. Icardi heavily criticised the club’s ultras, going as far to challenge them to a fight and threatening to fly over 100 Argentine criminals to ‘kill them on the spot’.

Unsurprisingly, his comments did not go down well and he was later stripped of the captaincy. He continued to endure a difficult relationship with the club’s supporters in the years since, his wife and agent Wanda Nara continuing to stir proceedings in the background, before joining Paris Saint-Germain on a season-long loan deal last summer.

The most recent player to feature in this list is the Arsenal captain, whose position at the club is uncertain following his aforementioned reaction to jeers from the home support.

The Swiss international has rarely been a popular figure at the club during three seasons at the Emirates, producing a series of inept displays and being targeted, often justified, for some of the club’s poorer performances in recent seasons.

Voted in as club captain during the summer, Xhaka was supposed to be the leader behind a new era under Unai Emery, though that looks unlikely given his actions last weekend.

Having waved his arms and cupped his ears to the supporter’s boos, Xhaka would proceed to tell the Arsenal fans to ‘f*** off’ before visibly removing his shirt as he left the field.

Xhaka’s actions were unacceptable, particularly from a club captain, however it was a visible demonstration of his frustration at a difficult relationship with his own support.

Whether he can come back from this remains to be seen, though it will take some effort to win back the affection of the Arsenal faithful.

Read: Rating all of Arsenal’s captains in the Premier League era