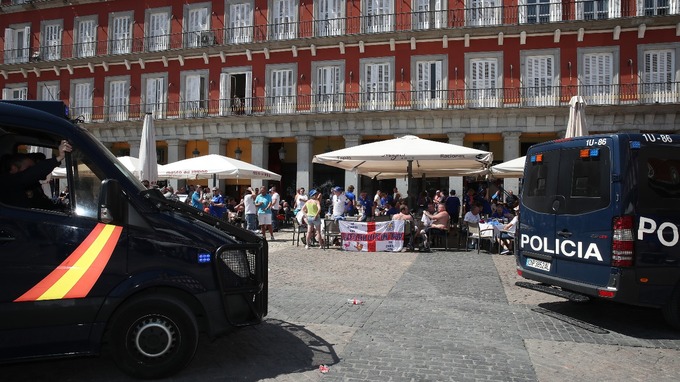 It is unbelievable how quickly a situation can change. Everything was calm, relaxed, and enjoyable. And then suddenly, all hell broke loose.

I was sat with my Dad in Plaza Mayor, the main square in the centre of Madri, where hundreds of Leicester City fans had gathered. For hours, fans had been singing, chanting, drinking and having a good time. Then, shortly before 5pm, everything went crazy.

How it kicked off

A group of people had come towards the marquee tents that were lined around the square. They tried to put up a large flag but it just wasn’t happening. Yet it attracted the attention of a camera crew. The group then posed for a photo whilst they held the flag aloft.

Then, one of the men then took a flare from his pocket and seconds later blue smoke was flying into the air.

The police were over straight away but they didn’t come in all guns blazing. They confiscated it and started to move off, but unfortunately, some of the City fans had spotted the police in amongst the crowd.

Quickly they began hurling abuse and running towards them to which the police retaliated. Batons came out and the sound of rubber bullets pierced through the air.

Bottles, flares, and chairs were thrown into the direction of the police before a police van started driving erratically across the square as fans scattered to get clear of its path. And soon tens of officers were in the square running to all sides.

A video taken by someone next to me shows a man in a white t-shirt hit twice, once after he had already been knocked down. It was brutal and completely out of order.

I can only account from where I was standing but the police just rushed through knocking over tables and chairs and hitting anyone they could reach. The square had four exits and loads of us rushed to the closest one.

We were all on top of each other and two men in front of me fell onto their elbows but were quickly helped up as we looked to get away from the police.

It was all so quick and it all come out of nowhere.

It was disappointing to see reports of English fans looking for trouble and ‘letting the country down’. For the whole afternoon, there had been no trouble at all. The police had stayed silently on the outskirts of the square and had even been content with football’s being lobbed backwards and forwards.

Of course, some of the behaviour which was captured on video cannot be excused and there were some clearly there looking for a fight.

Yet the events of the previous night where allegedly police had started on Leicester fans for little reason had left a bitter taste in the months of many of the English. So when they saw the police in their territory, they immediately went onto the attack.

It is so frustrating because I am certain had that flare not been lit for a single photo, there would have been no trouble. There was just nothing to suggest what was to come.

It had a detrimental affect on the rest of the night. At the ground, it was clear that the presence of the police and stewards all armed with batons, meant that our fans were all a little intimidated perhaps.

The atmosphere wasn’t great but that may have been because we were all biting out finger nails as Atletico dominated us. And even as we left with an extremely respectable 1-0 defeat at the Vicente Calderon, my mind was still wondering back to the events in the square.

I have no doubt in my mind that Leicester City were let down by some idiots. However the Spanish police have a negative reputation and they demonstrated everything to support it.

The sheer lack of hesitation as they approach innocent people before they strike them hard is actually quite frightening to believe.

In no way can I defend the actions of some of our fans, but it is important to realise had that ONE flare not been lit, Leicester City and England’s reputation would still be very much intact.

This article was written by Journalism student and Leicester City fan, Nathan Louis, who witnessed first hand the shocking scenes in Madrid.

If like Nathan, you wish to write about Leicester City, please write for The Football Faithful