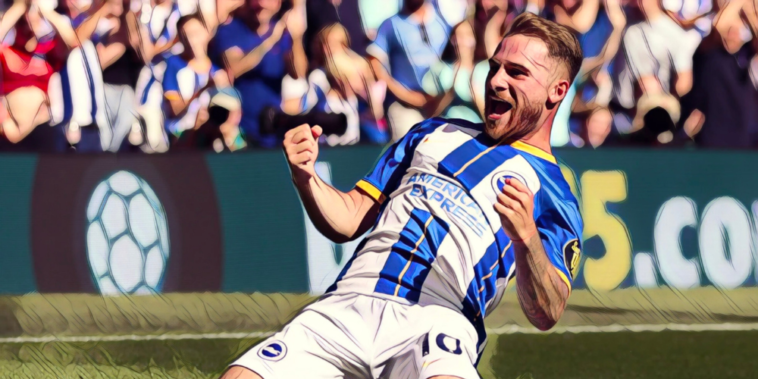 Emmanuel Petit has urged Arsenal to make a move for Brighton’s Alexis Mac Allister, as the club consider midfield additions.

Arsenal were linked with a number of midfielders during the summer transfer window, but failed to bring in a new signing after a failed move for Aston Villa’s Douglas Luiz on deadline day.

The Gunners were also linked with Arthur Melo, who signed for Liverpool on loan in the final stages of the window. Petit believes not signing Melo is not a ‘big miss’ for his former side and has suggested the Seagulls’ Mac Allister as an alternative.

The Argentina international has impressed during the opening weeks of the season and has scored four goals in six Premier League appearances for Brighton.

“Not signing Arthur Melo isn’t a big miss for Arsenal,” the former Gunners midfielder told Lord Ping. “But I know they were looking for that link between the midfield and striker.

“If I were [Arsenal technical director] Edu, I’d make an offer for Alexis Mac Allister from Brighton – I really like him.”

Petit has been impressed with Arsenal’s start to the season, which has seen the Gunners win five of their opening six games to lead the Premier League table.

Arsenal have not finished inside the Premier League’s top four for six seasons, but Petit believes their ambitions could be even greater than Champions League football, should the club maintain their current form and learn to beat the division’s top teams.

“Right now, Arsenal are first in the league so I would say they are genuine title contenders,” he added.

“They have improved over the last few seasons, but they still need to improve against the top teams. They need to learn to convincingly beat top teams.

“We’re seeing things in this Arsenal squad that we haven’t seen before. Maturity, character and personality and so for them to be able to beat the best teams in the division is the last stop for Arsenal.”