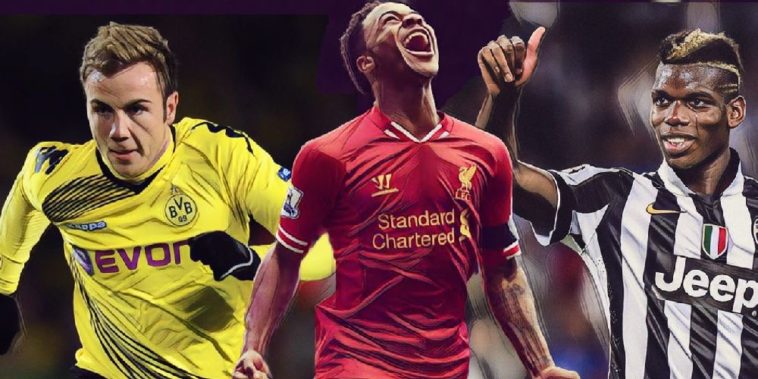 Atletico Madrid’s Joao Felix has been named as the 2019 winner of the Golden Boy award, an honour recognising the finest footballer in the world aged 21 or under for their achievements over the past year.

The teenager joins a long list of precocious talents to have received the award since it’s creation in 2003, but just how have the last ten winners fared over their careers?

The Brazilian burst onto the European scene at the Italian giants following his move from South American football, delivering on his reputation as one of the finest young talents in world football by scoring nine times in his first 18 Serie A appearances.

He would be named as the Golden Boy winner the following year after a haul of 15 league goals, and would continue to score regularly in his first four seasons as Milan won the Scudetto in 2011.

From there, however, injuries would take their toll, reducing him to just 15 league appearances over two seasons and his career has been on a downward spiral ever since. He would return to Brazil with an underwhelming spell at Corinthians, before enjoying a revival on loan at Sao Paulo that prompted a second chance in Europe.

Looking a shadow of his former self he would toil during spells at both Chelsea and Villarreal, before heading to China and later back to Brazil.

Now 30-years-old, Pato’s best days are behind him and his career has been one of unfulfilled potential.

Where to start with mad Mario?

The bonkers Balotelli has had some notable career ‘highlights’, though not always confined to the pitch.

Having emerged at Inter Milan he would head to the Premier League and Manchester City with Roberto Mancini, where he would play his role in the club’s early successes following their billionaire investment.

He would be awarded the Golden Boy in 2010, modestly admitting that he had not heard of Arsenal’s Jack Wilshere who he beat to the gong.

Balotelli’s career has been one of hits and misses since then, thriving after moving back to AC Milan before flopping during a disastrous spell at Liverpool. Mini-revivals in France at Nice and Marseille followed, before heading back to hometown club Brescia this summer.

His off-field antics have probably contributed to his on-field problems and his goal of winning the Ballon d’Or ultimately proved nothing but a pipe dream, but he wouldn’t be Mario without them, would he?

The German wonderkid seemingly had the world at his feet less than a decade ago, the key figure in Jurgen Klopp’s Borussia Dortmund side which would win back-to-back Bundesliga titles.

The creative midfielder would be named as Golden Boy winner in 2011 in the midst of that second title-winning season, staying at Dortmund for a further season before Bayern Munich came calling.

His move to Bavaria would deliver three more league titles, whilst he would also hit the winning goal as Germany won the World Cup in 2014. His spell in Munich would be mixed, however, failing to secure a regular position under Pep Guardiola and he would return to Dortmund in 2016.

After battling a metabolic disorder he would return to fitness, though the ‘German Messi’ has perhaps not turned out to be the generational talent it was thought he would be.

Valencia’s loss was certainly Malaga’s gain after they signed the talented teenager from their Spanish rivals, Isco being the central figure as the club embarked on a run that would see them qualify and thrive in the Champions League.

The playmaker would be the star turn in a side that would reach the quarter-finals of Europe’s leading competition, whilst he would also help the Spanish under 21’s dazzle to win the European Championships before departing in a £30m move to Real Madrid.

His time at the Bernabeu has been stacked with team success, the club winning La Liga and four Champions League titles in his six seasons at the Bernabeu. For all his ability, Isco has failed to truly establish himself as a key figure in a talent-filled midfield, his name seemingly a constant source of speculation regarding a move away.

Having failed to make the grade at Manchester United, Pogba would head to Italy and Juventus where he would flourish into one of the best young midfielders in world football.

It would be a year after his switch to Turin that he would be crowned as the Golden Boy, Pogba helping Juventus to the first of four consecutive Serie A titles during his time at the club.

His former side would come calling in 2016 and he would head back to Old Trafford in a world-record deal, the club smashing the transfer-record just four years after allowing him to leave on a free transfer.

League Cup and Europa League success would come in his debut season, though times have been harder at the club in recent years as United continue to battle through a transitional phase.

On the international scene he would thrive, however, helping France to World Cup success in 2018, scoring in the final victory over Croatia as Les Blues were crowned world champions for a second time.

Constantly linked with a move away, Real Madrid have been long-time suitors of the Frenchman.

Working in tandem alongside the likes of Luis Suarez and Daniel Sturridge, Sterling would thrive in an attack-minded Liverpool side that narrowly missed out on the Premier League title in 2014.

The winger’s performances would be enough to attract the attention of Europe and he would be named as the best U21 player in world football later that year, though Liverpool’s struggles the following season ultimately led to a desire to leave the club.

Manchester City would secure his services in a £49m deal in 2015, and after a slow start he would flourish into an elite attacking talent.

Under the guidance of Pep Guardiola, Sterling has developed into a talismanic figure for club and country, winning back-to-back league titles and English football’s first-ever domestic treble.

Manchester United would make the French forward the most expensive teenager in history following his rapid rise at Monaco, many questioning the club’s decision to spend lavishly on a relatively unproven talent.

A debut goal against Liverpool would soon win over some doubters, and Martial would finish the year by being named as the recipient of the Golden Boy award.

Since then however it has been a career of fleeting performances, Martial never truly looking like an elite talent with purple patches mixed with below-par displays. Still just 23 he has time to continue developing, and restored to his preferred central role this season could once again thrive.

FA Cup, League Cup and Europa League success has come at Old Trafford, though Martial has not quite had the impact expected.

There was much hype surrounding the Portuguese midfielder in 2016, having starred for Benfica and the national side as they were crowned winners of the European Championships, winning the Young Player of the Tournament in the process.

A big-money move to Bayern Munich would follow, but after a poor debut season, he would find himself on the fringes and struggling to make an impact. A loan move to Swansea City proved disastrous, before returning to Bavaria and continuing to play a bit-part role.

Having been deemed surplus to requirements at the German champions, he left the club to join French side Lille this summer.

It’s perhaps scary to think that Kylian Mbappe is still eligible for this award, given the forward’s lengthy list of achievements since announcing himself to the footballing world.

Part of an exciting young Monaco side which would conquer Ligue 1 and reach the Champions League semi-finals, it would not be long before European football’s big boys would begin to circle.

A move to Paris Saint-Germain, initially on loan before a €180m permanent move would deliver further success, Mbappe scoring prolifically and winning back-to-back Ligue 1 titles, being named as the division’s Player of the Year last season after scoring 33 goals in just 29 league appearances.

On the international stage, he has developed into a key figure with France, helping his country to World Cup success in 2018 and becoming the first teenager since Pele to score in the final.

He has scored 70 goals in just a little over two seasons in the French capital, the sky remaining the limit for the phenomenally talented 20-year-old.

Named captain of Ajax whilst still a teenager, De Ligt has proven to be a player far more mature than his tender years would suggest, captaining the Amsterdam side to a domestic double last season.

An imposing physical presence, he was long tipped for the top and made his international debut at just 17-years-old, becoming the youngest player to start for the Netherlands since 1931.

He would help guide Ajax to a surprise run to the Champions League semi-finals last season, attracting the interest from almost every major club in Europe as a scramble ensued for his signature.

It would be Juventus who would win the race, De Ligt arriving in Turin in a big-money deal to bolster the club’s defensive options. His performances in 2018 were rewarded with the Golden Boy, De Ligt becoming the first defender in history to win the accolade.

Still learning his trade, he has no better teachers than Juventus stalwarts Georgio Chiellini and Leanardo Bonucci, the Dutch defender likely to emerge as one of the very best in the coming seasons.