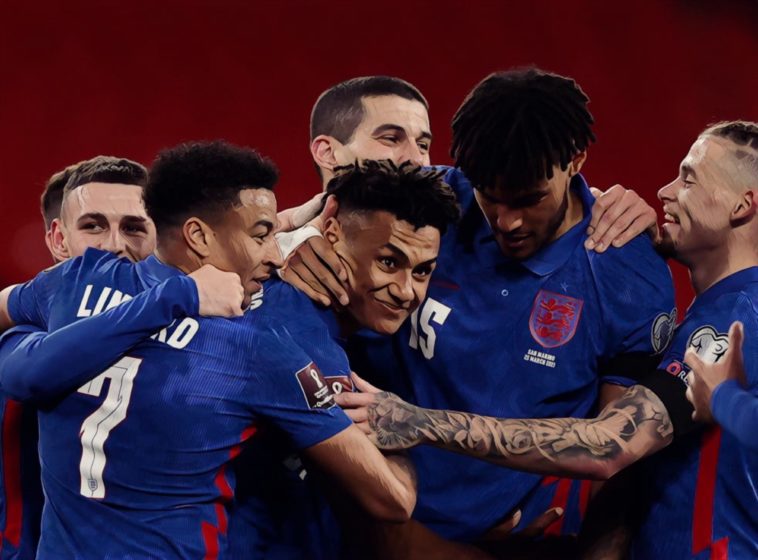 Ollie Watkins became the latest English footballer to score on his debut for the national team, netting the final goal in a 5-0 win over San Marino on Thursday.

The Devon native is the 13th player since the turn of the century to score in his first game for the side, ensuring he will forever have a little slice of history alongside some illustrious (and forgettable) names to achieve the same feat.

Every England international to score on his debut since 2000:

There are worse ways to mark your international debut than by scoring a bicycle kick. Darius Vassell’s spectacular finish against the Netherlands in February 2002 got his England career, which saw him score six goals in 22 appearances, off to a great start, but it ended in a bad way.

The former Aston Villa and Manchester City forward missed England’s final penalty against Portugal at Euro 2004, his last ever act for the Three Lions.

Wayne Rooney and Francis Jeffers both debuted for England alongside each other in the second-half of a 3-1 defeat to Australia in 2003.

Rooney blanked, while the former Arsenal striker scored England’s only goal that day. The former went on to become the country’s leading goal scorer, whereas Jeffers never won another cap.

Five of the most remarkable international debuts in the modern era

The excitement surrounding the young Shaun Wright-Phillips only increased when the Man City winger scored a superb solo goal on his international debut in 2004. Picking up the ball from within his own half, he waltzed unperturbed into Ukraine’s box before dispatching the ball in the far corner.

Despite winning the Premier League following a move to Chelsea in 2005, Wright-Phillips’ career never reached the heights expected of him. He did, however, earn more England caps (36) than his dad, Ian Wright (33), which feels so weird.

Another young starlet whose career fizzled out, Kieran Richardson got off to a flying start with England. The Manchester United academy graduate scored a brace against the USA in 2005, including a brilliant free-kick, on his debut.

Richardson went on to win eight caps, but never scored for the Three Lions again. A Premier League winner with United, he would later play for a host of lower half clubs such as Sunderland, Fulham and Aston Villa.

‘The Nuge’ scored maybe the greatest England goal of all time in his one and only appearance in 2007. Come on, you know it’s true.

Another one-cap wonder with a 100% goalscoring record for England, Steven Caulker scored in a friendly against Sweden in 2011.

Unfortunately for him the goal is barely a footnote in what was a thrilling match dominated by Zlatan Ibrahimovic four goal salvo, which included that overhead kick.

From Sven’s lowest moment to the wally with a brolly, England’s worst qualifier defeats in recent history

What a day the 14 August 2013 was for Rickie Lambert. That day the Southampton striker made his debut for England at the age of 31, scored with his first after coming off the bench, and had the birth of his third child.

“If that’s the only moment I’m going to have in an England shirt – hopefully not – I couldn’t have wished for it to have been any better,” he said afterwards.

It wasn’t the former Liverpool player’s only contribution in an England shirt, as he went on to score twice more for his country and go to the World Cup in 2014. Lambert also provided three assists across his 11 caps, all for Danny Welbeck.

Making his international debut at 22 years of age, Andros Townsend was actually decent for England across his 13 caps, scoring three goals.

The Crystal Palace winger got off the mark in the 78th minute against Montenegro in 2013, belting a low swerving shot from range just before being subbed off.

Ten English-born footballers who represent other countries at international level

In March 2015 a certain Tottenham Hotspur striker by the name of Harry Kane scored on his England debut in a 4-0 win over Lithuania. Whatever happened to that guy?

Having scored on his Premier League, Champions League, Europa League, League Cup and under-21 international debuts, it stands to rights that Marcus Rashford would also score on his first appearance for the England senior team.

And so it came to be, the Manchester United forward got on the scoresheet during a Euro 2016 warm-up match against Australia at the Stadium of Light after just three minutes. It made him the youngest Englishman to score on his international debut.

Despite manager Roy Hodgson saying only a month earlier that he was “unlikely” to be in the final 23-man squad, Rashford did indeed go to France. He replaced Adam Lallana in the 2-1 group stage win over Wales to become England’s youngest ever player at a European Championship.

The first ever Bournemouth player to score for England, Callum Wilson found the net on his debut during a 3-0 friendly win over the United States in 2018. Now at Newcastle United, the striker failed to score in his next three caps and has fallen off Gareth Southgate’s radar since 2019.

Following a blistering start to the Premier League this season, scoring eight goals in five games, Dominic Calvert-Lewin got a call-up to the national side in October 2020. The Everton striker headed home during a 3-0 friendly win over Wales, and he’s since gone on to score a further three goals for England.

Having adjusted well to life in the Premier League following his move from Brentford to Aston Villa last summer, Ollie Watkins got the call from Southgate to join England’s World Cup qualifying.

The striker got off to a brilliant start with a low strike into the left corner against minnows San Marino this week.