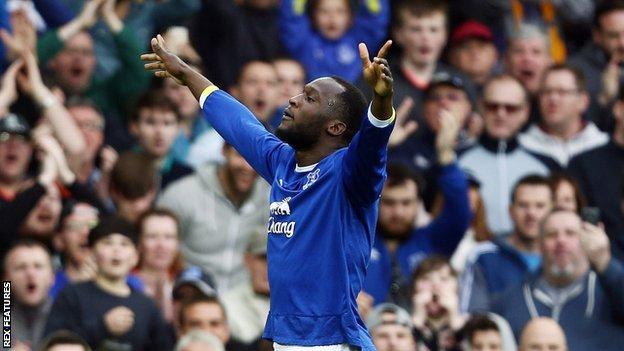 Everton remain in the race for Champions League football, after a pulsating and gripping victory in a six goal thriller against defending champions Leicester City.

Demarai Gray made a lung busting run from inside his own half to the edge of the penalty area, and played a measured pass to Slimani to strike an equaliser beyond Joel Robles.

The visitors had gained momentum from their 4th-minute equaliser and just five minutes later, took the lead directly from Albrighton’s free-kick. A breathtaking start.

Everton attempted to gain control of the game by maintaining possession and gradually building intricate passing moves. Leicester remained firm in the midfield, with a compact wall denying entry into the dangerous areas of the pitch.

The hosts began to resort to the wider areas and eventually found an equaliser on 23 minutes via Romelu Lukaku. Barkley whipped an outstanding and magical cross in behind Leicester’s defence and Lukaku swooped into glance his header into the far bottom corner.

Lukaku’s goal revitalized Everton, and before the half-time break, they were back in front!

Barkley had a promising opening but was denied by Schmeichel at his feet. The resulting corner provided the goal. Leicester failed to mark efficiently and Jagielka was gifted with a free header to guide Mirallas’ corner into the top corner. 3-2 to Everton.

Romelu Lukaku gave Everton a two-goal cushion shortly after the interval after the Foxes were exploited from another set piece.

Mirallas delivered the corner and Jagielka beat King in the air to glance the ball to the back post. Lukaku’s only intention was to find the net and he leathered a powerful half volley into the far bottom corner.

Leicester City manager Craig Shakespeare made a late attempt to salvage something from the game by bringing on Riyad Mahrez and Ahmed Musa on the hour-mark.

The Foxes face Atletico Madrid in Spain on Wednesday evening in the first leg of their Champions League quarter final tie. Everton return to Goodison Park next Saturday to face Sean Dyche’s Burnley in a 3pm kick-off.

Atletico Madrid on the mind?

This gave opportunities to young stars such as Ben Chillwell and Demarai Gray, who are beginning to enjoy more success with Leicester City this season. However, the absence of various key players meant it was going to be a very difficult battle for the defending champions.

The Foxes’ fairytale is set to continue in Madrid on Wednesday, but after five victories, it’s safe to say that Shakespeare believes Leicester have secured their Premier League status.

It was very clear that some of the replacements were unable to provide adequate cover, especially right-back Amartey and centre-back Benalouane.

The marking from set pieces exploited Benalouane, who lost his marker on various occasions, including Lukaku for the Belgian’s equaliser on 23 minutes. Amartey also struggled to contain Mirallas during the game and this was notably proved when he was forced to foul the Everton winger in the build-up to the toffees’ opening goal.

Leicester attempted to implement an effective style to beat Everton, by playing a compact midfield and catching them on the counter-attack. This worked effectively when the foxes’ scored an equaliser on the 4th-minute but Everton maintained possession and Leicester became fatigued due to their persistent and relentless attempts at closing down.

Everton played with a high pressing style, spearheaded by Romelu Lukaku and starring Ross Barkley. It was an overall good performance from the hosts, although questions could be asked of their defence on occasions.

They are strong from set pieces, with Phil Jagielka proving a threat inside the box on two occasions this afternoon. Everton started very strongly and took the lead after 31 seconds via youngster Tom Davies.

The Toffees’ were caught forward and Leicester exploited them, but they learnt from their lessons and amended their performance. They began by maintaining possession and gradually tiring Leicester’s players, who continuously and rapidly attempted to close them down.

Leicester were very compact in central midfield, to stem the flow of Everton’s intricate passing play. They also pressed very intensely to reduce the time each Everton player had with the ball. It forced them to shift the ball quickly and increasing the risk of them making a mistake.

This would then ideally gift Leicester possession and they can use their pace to catch Everton on the counter-attack.

However, Everton shifted Ross Barkley inside as an attempt to bring an imaginative and creative player into central attacking areas to have an impact on the game.

Morgan Schneiderlin played very efficiently and astutely in holding midfield and Leicester awarded him with too much space. It allowed him to play the ball forward and pass the ball into gaps of space to create goal scoring opportunities.

Leicester’s compact set-up in midfield, this made it difficult for Everton to play the ball in behind. This forced Lukaku to pick the ball up from a deeper position, although Everton utilized the overlapping runs from Holgate and Baines to create crossing opportunities for Lukaku.

Statistics you need to know