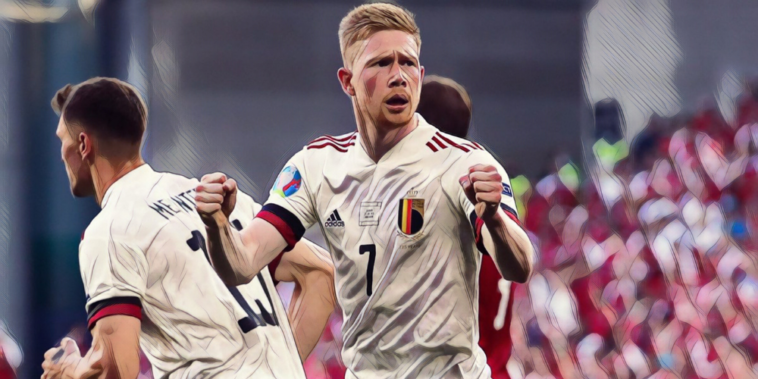 We’re already into the final group stage fixtures as Euro 2020 begins to heat up, with Italy, Netherlands, Belgium and Wales already assured of their places in the knockout rounds.

It’s an opposite story for North Macedonia and Turkey who have already been eliminated, the latter having hugely disappointed despite much pre-tournament optimism surrounding their chances this summer.

As we prepare to finalise the remaining groups, we’ve decided to look back at the second round of fixtures and pick our best XI.

North Macedonia’s maiden venture to the Euros is officially over after consecutive defeats, though the minnows have proven they are no whipping boys with competitive performances.

Arguably his nation’s best player across their two games, goalkeeper Stole Dimitrievski made a string of saves to keep the score respectable in the 2-1 defeat to Ukraine, including guessing right to push away Ruslan Malinovskiy’s penalty.

The talk after Germany’s opening game was that Joshua Kimmich was wasted in a wing-back role, the Bayern Munich midfielder having struggled to exert his usual influence in the defeat to France.

Kimmich showed his worth in the defensive role against Portugal however, as a Germany side that has been largely written off made a statement of intent.

Kimmich was excellent when venturing forward and key to Germany’s potency as they ruthlessly cut through the Portuguese defence, his switch of play to Robin Gosens leading to the equalising goal.

The 26-year-old then forced a second Portugal own goal after Raphael Guerreiro turned in his cutback, before supplying a wonderful cross for Gosens to head home Germany’s fourth.

Denzel Dumfries is unfortunate to miss out on selection here, with the Netherlands right-back enjoying a Euro 2020 to remember so far.

Italy have been magnificent during the group stage to become Euro 2020’s best side so far, securing three consecutive wins including a 3-0 thrashing of Switzerland in their second fixture.

Roberto Mancini’s side have been electric with energetic attacking moves mixed with typical Italian sturdiness defensively, their performance against Switzerland showcasing the best of this new and improved Azzurri who have bounced back from their 2018 World Cup disappointment in style.

Leonardo Bonucci has led the side at the finals to date and stepped up following Georgio Chiellini’s substitution through injury, controlling proceedings from his defensive role with the 34-year-old’s quality in possession evident throughout.

Scotland stifled a lacklustre England on Friday evening to get their Euro 2020 campaign up and running, Steve Clarke’s side now knowing a win in their final fixture should be enough to progress.

Hanley was strong and commanding in Scotland’s three-man backline, dominating his duel with Harry Kane whose sub-standard showing will raise concerns amongst the Three Lions’ fanbase.

Hanley and Scotland will take confidence from this performance however, the Norwich City defender alert to any danger in a strong showing at Wembley.

Germany produced a scintillating performance to defeat Portugal 4-2 on Saturday, with the wing-backs central to their success against the holders in Munich.

Gosens was brilliant and the most dangerous player afield for Germany, the Atalanta star involved in almost everything to give Nelson Semedo a torrid time down Portugal’s right flank.

Gosens’ first-time drive was turned home by Ruben Dias for Germany’s equalising goal, before providing the assist for Kai Havertz’s goal and netting the fourth himself with a back-post header.

Robin #Gosens is the first Germany player to have a hand in 3 goals at the EUROs since @BSchweinsteiger in 2008 – also vs. Portugal 🇩🇪🇵🇹#DieMannschaft #GER #EURO2020 #PORGER pic.twitter.com/jxxrvMBypU

Atalanta’s flying full-backs have been key to their success in recent seasons and Gosen showcased this weekend that there are few on the continent as devastating when given a licence to get forward.

Anchoring our midfield diamond is Billy Gilmour, whose first Scotland start could hardly have been better as he rose to the occasion against England at Wembley.

The 20-year-old overcame a difficult start to settle and began to dictate proceedings at the heart of the Scotland side, with Gilmour having now won Man of the Match accolades on his Premier League debut, FA Cup debut, first Champions League and first international starts.

What a performance by the boys tonight. Fans were unreal all night! 🙌🏼🏴󠁧󠁢󠁳󠁣󠁴󠁿 pic.twitter.com/SVTxmgPfLx

Gilmour has all the makings of a top, top player and will be a huge miss for Scotland after testing positive for Covid-19, the midfielder now facing an isolation period which may have ended his tournament.

Manuel Locatelli has starred for Italy’s vibrant side so far with the midfielder producing a performance of pure class in the win over Switzerland.

The Sassuolo midfielder’s passing throughout was brilliant as he opened up the Swiss defence, whilst he showcased his ability to win games with a well-taken brace – the first double scored by an Italian player in the Euros since 2012.

He ghosted into the box unmarked to net his first, before drilling home a crisp second to double Italy’s advantage. There will no doubt be bigger clubs circling the 23-year-old who has been at the heart of a revitalised Azzurri side.

How good is Kevin De Bruyne? If he’s not the best player in the world right now, he’s certainly close.

De Bruyne missed Belgium’s opening fixture and was named only amongst the substitutes against Denmark as he recovers from injury, though was called upon from the bench to turn the game around with Roberto Martinez’s side trailing.

The 29-year-old produced a sublime assist to set up Thorgan Hazard for the equalising goal, putting two Danish defenders on their backside with a feint, before rolling the ball across goal for the grateful Hazard to tap home.

8 – Kevin De Bruyne has made eight assists for Belgium in major tournaments (World Cup & Euros); since the 2014 World Cup, no European player has made more across the two competitions. Surgical. #BEL #EURO2020 pic.twitter.com/9JTxUzlxZ7

De Bruyne then netted a winner – and assured Belgium’s place in the last 16 – with a driven effort from just outside the box on his ‘weaker’ side, his performances set to be crucial to the Red Devils’ hopes of making an impact in the latter stages.

Wales are through to the knockout rounds and dreaming like it’s 2016 all over again, the star names that helped the nation to the semi-finals of that tournament once again pushing their charge.

Robert Page’s team defeated Turkey 2-0 in their second fixture, a win which coupled with results elsewhere has secured progress and it was Aaron Ramsey who was inspirational throughout.

The Juventus midfielder covered every blade of grass for the cause and opened the scoring in fine fashion, his willingness to run himself into the ground later evidenced with a brilliant last-ditch tackle.

There’s something about pulling on the Wales shirt that invigorates their players like few other nations.

Joining Ramsey in our Team of the Week is Gareth Bale, who provided a reminder of just what an incredible footballer he remains when in the mood.

His missed penalty was poor, but proved only a blemish on a performance in which he destroyed Turkey almost singlehandedly on occasion, with his pass for Ramsey’s opening goal exquisite.

This is what it means to Gareth Bale 😆#EURO2020 pic.twitter.com/hPGwZzR9XU

Bale’s direct approach terrified the Turkish defence and he sealed the win with a clever burst from a short corner to set-up Connor Roberts for his second assist of the game.

Arguably the best player on the pitch during Germany’s crucial win against Portugal, with Havertz causing problems throughout with his clever movement and link-up play.

The 21-year-old helped force the equalising goal as Ruben Dias turned into his own net, before deservedly getting himself on the scoresheet in the second half.

Questions have been asked about Germany in the build-up to this tournament, but their performance against Portugal proved Joachim Low’s side should not be disregarded as contenders, their free-moving forward line proving problematic for the Portuguese defence.

La Liga’s Young Player of the Season has shone during Euro 2020’s opening fixtures, with the forward central to Sweden’s narrow win against Slovakia.

Isak seemed on a one-man crusade to secure Sweden’s first win of the tournament, running at the Slovakian defence time and time again with the 21-year-old coming close to scoring an outstanding individual goal.

Already linked with Premier League clubs including Liverpool, Arsenal and Chelsea, it comes as little surprise given the youngster’s starring showings as Sweden’s leading light in attack.