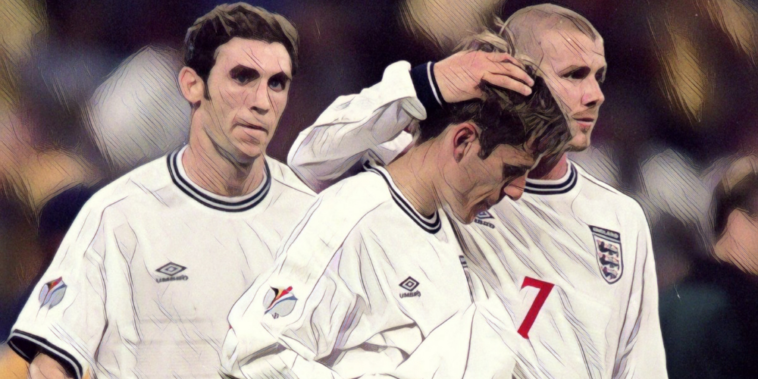 England will look to end a long wait for tournament success at Euro 2020 this summer, with Gareth Southgate’s side having made a winning start after beating Croatia 1-0 on Sunday.

The Three Lions next face Scotland in a huge all-British clash on Friday evening, where victory will assure the nation’s place in the knockout stages and avoid the embarrassment of an early exit.

England have previously failed to reach the knockout rounds on six occasions at major tournaments, and we’ve decided to look back at some of their worst performances.

Here are the six times England failed to get out the group at a major tournament.

After winning the World Cup on home soil in 1966 and ending the decade as one of the world’s best international sides, England suffered a sharp downturn in fortunes throughout the seventies, failing to qualify for four major tournaments in succession.

The Three Lions returned for the 1980 European Championship which was held in Italy, but their tournament proved short-lived as Ron Greenwood’s side exited at the group stage.

England had qualified in impressive fashion with seven wins from eight, whilst hopes were further raised following the success of English club sides in the European Cup, and the avoiding of holders Czechoslovakia and 1974 World Cup finalists the Netherlands and Germany.

England opened their tournament with a 1-1 draw with Belgium, before falling to host nation Italy as Marco Tardelli scored the only goal of the game.

The Three Lions rallied to beat Spain 2-1 courtesy of goals from Trevor Brooking and Tony Woodcock, but it was not enough to secure progress as a third-place finish ensured an early England elimination.

Two years later and England suffered a second successive group stage exit at a major tournament, though this time returned home unbeaten in a World Cup format that include two group stages.

Ron Greenwood’s side won each of their opening three fixtures against France, Czechoslovakia and Kuwait to progress from the first round, before goalless draws with West Germany and Spain saw the Three Lions fail to reach the knockout rounds.

West Germany’s 2-1 win over Spain saw them top a three-man group in the second stage, eventually reaching the final before suffering defeat to Italy at the Santiago Bernabeu in Madrid.

England arrived at the 1988 European Championship with high expectations, though a combination of misfortune and poor performances culminated in a rather sorry showing in West Germany.

Sir Bobby Robson boasted a talented side who had qualified for the tournament in some style, though there was a reliance on Bryan Robson and Gary Lineker for goals and a centre-back pairing of Tony Adams and Mark Wright was inexperienced.

England were shocked in their group opener as tournament debutants Ireland secured a shock 1-0 win in the sapping heat of Stuttgart, whilst it was all over for the Three Lions after just two fixtures as a Marco van Basten hat-trick inspired the Netherlands to a thrilling 3-2 win.

Already down and out, England lost to eventual finalists Soviet Union in their final fixture to return home with no points, just two goals scored, and pride dented.

England have often headed into major tournaments with optimism high, the 1992 European Championship an edition in which the Three Lions failed spectacularly to meet pre-tournament expectations.

World Cup semi-finalists two years earlier, England had lost just once in two years ahead of Euro ’92, but some abject performances saw the nation crash out of the competition with manager Graham Taylor coming in for stinging criticism.

Two goalless draws and a defeat to host nation Sweden saw England finish bottom of the group, with Denmark – who were only admitted entry after Yugoslavia’s disqualification – emerging as surprise champions.

Euro 2000 is widely remembered as one of the most entertaining European Championship finals of all time, but is not a competition remembered fondly by England fans.

England had been unfortunate to exit the 1998 World Cup on penalties in the quarter-finals and a team boasting names such as Alan Shearer, Michael Owen and David Beckham were tipped as contenders two years later.

Glenn Hoddle’s side were placed in the tournament’s Group of Death alongside holders Germany, Portugal’s ‘Golden Generation’ and a Romania side who had beaten England at the previous World Cup.

The Three Lions raced into a two-goal lead against the Portuguese in their opening fixture before capitulating to lose 3-2, though bounced back to beat a far from vintage Germany courtesy of an Alan Shearer goal.

England needed just a point to qualify for the knockout stages and when goals from Shearer and Owen turned a 1-0 deficit into a half-time lead their work appeared all but done.

Romania hit back to level three minutes after the break however, before Phil Neville’s unfathomable foul conceded a penalty with just one minute remaining, substitute Ionel Ganea sending Nigel Martyn the wrong way to see the Romanians progress at England’s expense.

There will always be perennial optimists amongst an English fanbase, but the 2014 squad arrived at that summer’s World Cup with expectations lowered than in previous editions, the disappointment of their venture four years earlier still fresh in the memory.

Just five of the squad had previous World Cup experience and, handed a daunting group containing Italy and Uruguay, Roy Hodgson’s side appeared up against it.

England were beaten 2-1 by the Italians in their opening fixture, Mario Balotelli capitalising on the Three Lions’ defensive weakness after Daniel Sturridge had cancelled out Claudio Marchisio’s opener.

Defeat left England facing a must-not-lose clash against Uruguay, who had been stunned by Costa Rica in their opening fixture.

It was a familiar face who did the damage as Liverpool forward Luis Suarez scored twice, Hodgson’s side suffering an ignominious World Cup exit after Costa Rica defeated Italy the following day.

England had struggled badly in the Brazilian heat and their fortunes only worsened with a goalless draw with Costa Rica in their final fixture, heading home bottom of the group and with just a solitary point.