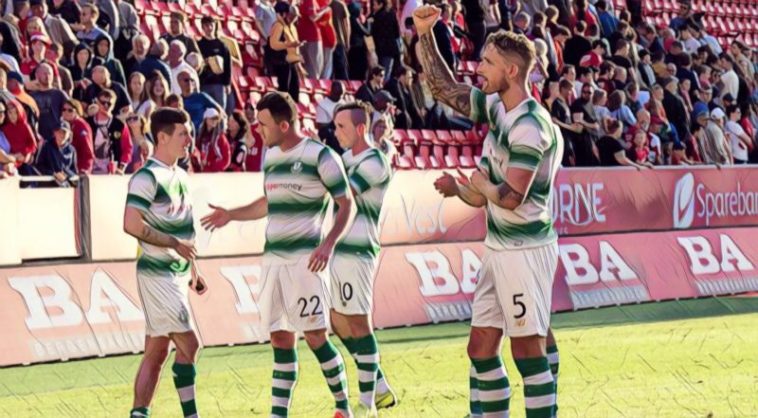 Three observations from the League of Ireland this week, including the mixed results in Europe, Frank Lampard’s first games in charge of Chelsea against Irish teams, and Bray Wanderers passing play lacks the clinical striker it needs to be in the hunt for promotion.

We didn’t have a full complement of SSE Airtricity League fixtures this week, but that doesn’t mean there wasn’t plenty of talking points to discuss.

European football returned to Ireland, as Dundalk, Shamrock Rovers, St Patrick’s Athletic and Cork City were all competing in either the Uefa Champions League or Europa League. Pat’s and Cork suffered disappointing two-goal losses at home, while the leagues top two teams came away with draws.

On the domestic front, Chelsea came to town for a couple of friendlies for Frank Lampard’s first matches in charge of the blues. The fledgling manager was denied his first win by Bohemians thanks to a brilliant finish by triallist Eric Molloy, although ‘Lamps’ got off the mark with a 4-0 defeat of Pat’s in Inchicore.

Three observations from the League of Ireland this week:

Dundalk and Rovers still have all to play for in Europe

While it is almost certain that at least half of Ireland’s four representatives in Uefa competition will be eliminated at the first hurdle, Dundalk and Shamrock Rovers can view their second legs with a certain level of optimism.

The Lilywhites failed to score at home against Riga FC in the Champions League, which will have disappointed the champions, but their Latvian opponents didn’t offer a great deal in attack and they will be relatively confident of getting a result in the away fixture.

The Tallaght outfit had a far more eventful night in Norway against SK Brann in the Europa League, securing a dramatic late equaliser to bring home two precious away goals.

Shamrock Rovers grabbed a deserved draw in Brann after a last gasp header from Roberto Lopes that sent the away end crazy!

Centre-back Roberto Lopes popped up in the 94th minute to score from a corner to make it 2-2, which completely changed the complexion of the match. Whereas Rovers were facing the prospect of having to win by one goal at least next week, they now just have to avoid losing or conceding more than a goal in the case of a draw.

It’s not often that Irish teams get positive results away from home, but that was a massive one for the Dublin side. They will be upbeat going into the return leg, and there’s a decent chance we could have two teams from this country progressing to the next round of their respective competitions.

Read: An in-depth look at what Irish teams can expect to face in Europe this week

All the cameras were pointed at Frank Lampard in Dalymount Park this week when Chelsea came to town, but the focus turned to one Evan Ferguson, who came off the bench for Bohemians in the second half of the friendly fixture.

The reason it got so much attention? He’s only 14-years-old.

What a memorable first-team debut for 1️⃣4️⃣-year-old Evan Ferguson against @ChelseaFC on Wednesday.

The #Bohs-SKB U15 star didn’t look out of place – skipping through the Chelsea defence to nearly score himself before later setting up the equaliser. One for the future. ?? pic.twitter.com/1WmwPyxqva

The teenager didn’t look a bit out of place though, being proactive with the ball, jinking past defenders and almost got an equaliser. He even pulled off a clever dummy in the build-up to Molloy’s goal late in the game.

Not to be upstaged, St Pat’s also gave a debut to a 14-year-old, the fantastically named Glory Nzingo, when they faced the Blues on Saturday afternoon.

The London club got a routine win in the end, hitting the Dubliners for four, but the Ireland U15 international got 19 minutes on the pitch, a memory he will never forget.

Who knows what the future will hold for these young footballers.

Read: Bohs hold their own against Chelsea, redemption for Batshuayi, and Molloy scores a belter

We’ve been banging on about how tightly contested the promotion race is in the First Division for a few months now, but the wheat appears to be separating from the chaff after 20 rounds of games.

Shelbourne now hold a five-point lead over the next best team, while there is also a five-point difference between sixth and fourth, the final playoff spot.

Bray Wanderers were in serious danger of being cut adrift following a poor run of results which had seen them win just once in five games. With Limerick coming to town on Friday night, it was do-or-die for the Seagulls as a defeat would have seen them fall eight points off the playoff picture.

The east coast outfit won by the narrowest of margins however, thanks to a Paul Keegan spot-kick right on the stroke of half-time.

?️? VIDEO: The key moment from last night's win over @LimerickFCie as Paul Keegan converted from the spot after Dylan McGlade had been fouled in the penalty area! #BWFC pic.twitter.com/5mXuU1akOB

Aside from the importance of the goal itself, the most impressive aspect of it was the build-up play. Every player was looking to make a progressive play on the ball and to move it between the lines. Even when under pressure from the visitors, they managed to hold onto possession, before creating the opportunity that lead to the penalty.

Gary Cronin has gotten his charges playing nice stuff on the deck, but they have not been proficient in front of goal in recent months. They’ve scored 25 goals overall, which is less than each of the top four teams, scoring five in their last five fixtures. Three of those came in the one game, however, a 3-2 win over Longford, while they were kept scoreless in two other matches.

After a good start to the campaign, they haven’t been able to keep up the pace and the lack of a killer instinct up front is what might be hurting their chances of getting back to the top tier. Their top scorer is Dylan McGlade, who has found the net six times, but the load isn’t being shared by his teammates; only eight other players have gotten on the scoresheet this season.

The ray of hope for Bray now is that they are coming into a kind run of games, with Galway, Athlone, Wexford and Cobh on the horizon. If they are going to make a push for promotion, now is the time to do it — but they’ll need to rediscover that scoring touch first.

See Also: It’s already too late for Ireland to capitalise on the success of the World Cup