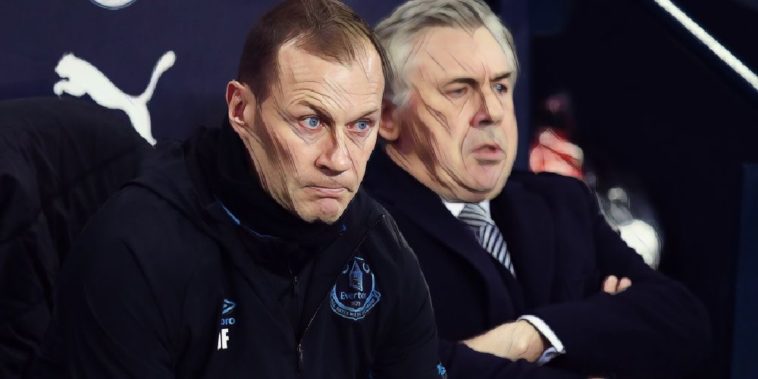 Duncan Ferguson ‘let rip’ after Everton’s poor showing at Anfield at the weekend, though the players are said to have ‘fired back’ – blaming their disappointing FA Cup third-round defeat on the clubs tactical approach.

Carlo Ancelotti’s side were eliminated from the FA Cup with a 1-0 defeat at the home of their city rivals, despite a full-strength Everton side facing a Liverpool team heavily rotated and being almost totally comprised of members of the club’s under-23 squad.

The loss continued the Toffees woeful run against their Merseyside rivals, the Blues having failed to win at Anfield in more than two decades since Kevin Campbell’s winner back in 1999.

According to The Athletic, the Everton coaching staff were left enraged by the club’s performance, with assistant Ferguson said to have ‘let rip’ at the club’s underperforming stars for their second-half showing, berating the squad for 25 minutes following the full-time whistle.

Ancelotti also let his players know he was far from impressed, though worryingly for the club, several senior players refused to shoulder responsibility and in a defiant stance, blamed the club’s tactics for the defeat.

According to the report, there is a feeling from some sections of the dressing room that Ancelotti’s style is limiting the impact of certain players, despite the atmosphere around the club having been lifted by the appointment of a manager with a proven record of success.

Previous poor recruitment is also being blamed for Everton’s struggles at present, whilst there is a feeling that it will take time for the 60-year-old to truly implement his methods as the club begin a new regime under their fifth permanent manager since 2016, with all previous incumbents having a very differing tactical approach.

Meanwhile, The Sun reckons that Ancelotti has already decided to ‘dump’ a number of players from his squad, with Gylfi Sigurdsson being the most high profile name, while Cenk Tosun, Theo Walcott, Morgan Schneiderlin and Michael Keane could also be offloaded.