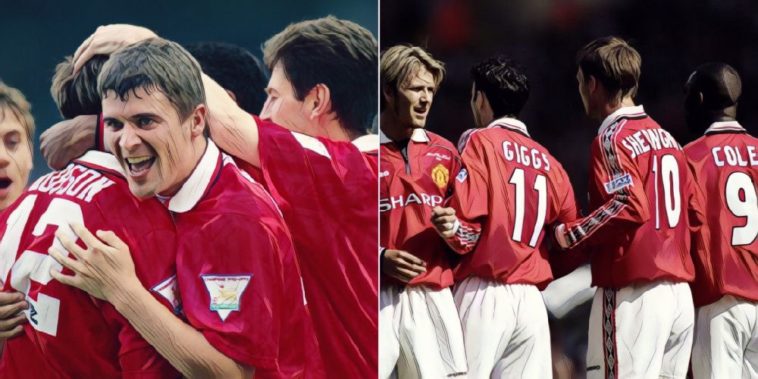 Denis Irwin has opened up on the differences between Manchester United’s legendary side of 1994 and the treble-winning team of 1999.

Irwin spent over a decade with the Red Devils and formed a key part of the side which dominated English football under Sir Alex Ferguson, winning seven Premier League titles and the Champions League amongst his wealth of major honours.

The Irishman formed part of the team which secured the club’s first-ever domestic double in 1994, before proving an indispensable member of the side which secured a historic Premier League, FA Cup and Champions League treble just five years later.

Irwin has now discussed the differences between the two teams and believes the ’94 side were much ‘physically stronger’, but believes the increased goal threat of the treble-winners was key to Manchester United‘s unprecedented success.

“It’s a big argument, because the ’94 team was physically stronger, with Ince and Keane in midfield, Eric [Cantona] and Mark Hughes up front, Pallister and Bruce at the back, Parker was a really good right back, Kanchelskis too,” Irwin told Switchbox TV’s The Old Footballers club.

“It was a physical team that ’94 team. It shows the difference, even in the space of five years, how the game had moved on because you needed huge physicality in the early 90’s. When the Premier League started with the likes of Wimbledon and Crystal Palace, you’d need to physically fight with them, and hopefully, your football would come out on top.

“By ’99, it had moved on a bit. You still had teams that battled away, Bolton made it really difficult for you, but the game was going quicker and smoother.

“That ’99 team, we were missing our two best players in the [Champions League] final in Scholes and Keane. I just think we had more attacking avenues in 99. We had more players who could score goals. The four centre forwards would all score goals. Giggs would get 10 a year, Scholes would definitely get 10 a year for you, Beckham, 10 a year, and one or two chucked in from Jaap [Stam] and Ronny [Johnsen].”

Irwin added how the side of the early nineties was often reliant on the inspiration of Eric Cantona, whilst the increased squad depth of the treble winners and their additional attacking firepower helped the side compete both at home and in Europe.

“Eric was such an important player for us in 94, a lot of our great play went through him, whereas five years later, I felt like we just had more attacking avenues and we were a bigger threat going forward,” Irwin continued.

“The size of the squad had grown too, and we had some great players who came in – and I don’t just want to say the super subs like Ole [Gunnar Solskjaer] and Teddy [Sheringham] – but [Nicky] Butt, Jesper Blomqvist was a very underrated player, Henning Berg was a fantastic defender, Wes Brown was just coming through, and David May. That’s the difference between 94 and 99, the squad.”

Speaking further on the changes to English football during the first decade of the Premier League era, Irwin recalled the physicality and competitiveness of the United side in 1994 and a squad full of big characters.

“There was some big bad characters in there. We sometimes used to play English v Rest of the World, and I tell you what, it was fantastic, kicking two lumps out of each other. Brilliant.”