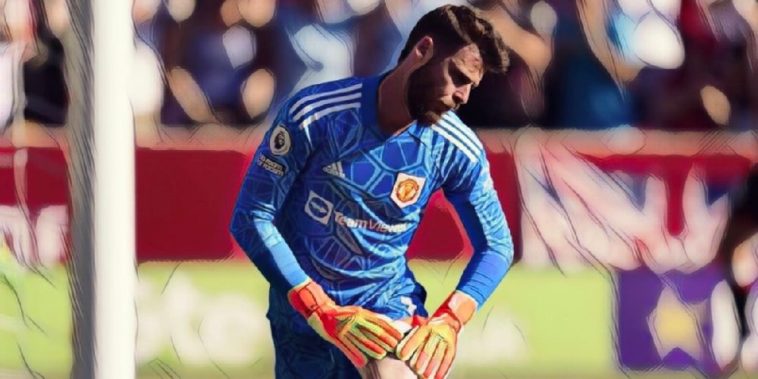 David de Gea fronted up and took full responsibility for his part in Manchester United’s shock 4-0 loss to Brentford.

Manchester United got off to the worst possible start last weekend, slipping to a 2-1 loss to Brighton in the Premier League opener, and got off to a terrible start in their second outing.

United came into the game without a win in their last six Premier League away games, and after just nine minutes in West London, they were bullied off the ball in their own half. Josh Dasilva’s relatively tame effort from the edge of the box was totally fluffed by David de Gea, who despite seemingly having two hands on the ball, allowed it to trickle into the back of the net.

Minutes later and United gifted the Bees another goal as they tried to play out from the back, with De Gea’s pass into Christian Eriksen being picked off by Mathias Jenson, who was able to pick his spot and roll it past the Spaniard.

With half an hour gone, things went from bad to worse, Ivan Toney rising highest at the back post at a corner, nodding back across the face of goal, with Ben Mee beating Lisandro Martinez to the ball to make it three.

Four minutes later, Brentford incredibly had another, launching a fine counter attack down the left, with Toney picking out the run of Bryan Mbeumo through the middle, who coolly slotted past De Gea.

Erik ten Hag made three changes at the interval to give his side a bit more physical presence, and while they created a couple of half-chances, they rarely threatened David Raya’s goal on what was a thoroughly miserable afternoon for anyone of a Manchester United persuasion.

Afterwards, David de Gea requested to speak publicly to the media to accept responsibility for his part in the defeat.

“I’m just taking my responsibility today,” he told Sky Sports. “I think I cost three points for my team. It was a poor performance from myself.

“After the first mistake and then the second, it was very tough for my team-mates to keep playing.

“Mistakes happen in football, of course, we should react better. [But] At the moment it’s tough every time we concede a goal. I should save the first shot – [if I had] the result would be different.”

Erik ten Hag’s brand of football requires the goalkeeper to be comfortable with the ball at his feet, but having seen Christian Eriksen dispossessed on the edge of his own box following his pass, De Gea admitted he needs to read the game better, with Brentford having clearly targetted the Red Devils backline.

“It depends how the game is going. Maybe I have to read the game better and kick it long, maybe I shouldn’t play it to Christian. But of course, we aleays try to play, always try to have the ball, but sometimes, they press one against one across the whole pitch, and maybe I should read it better today.”