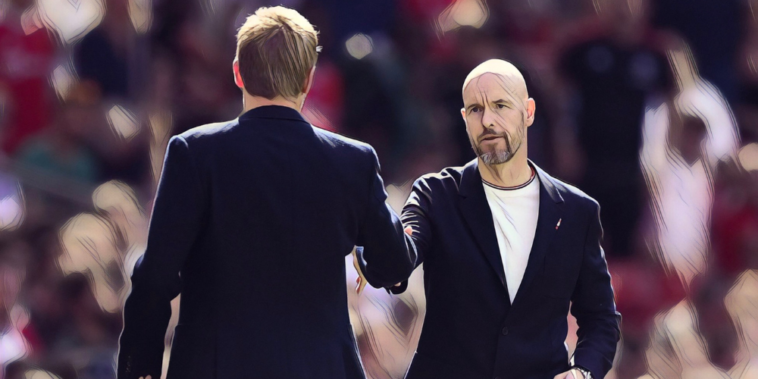 Erik ten Hag’s reign at Manchester United got off to the worst possible start last weekend, with the Red Devils beginning the Premier League season with a poor performance at home to Brighton.

Despite the swell of optimism that has greeted Ten Hag’s appointment as manager, familiar flaws were again evident as the club crashed to defeat at Old Trafford.

Ten Hag will now be aware of the huge task in reviving a declining giant of English football, with a number of illustrious managerial names having tried and failed to stop the rot since Sir Alex Ferguson’s retirement in 2013.

Manchester United made a winning start to David Moyes’ reign as manager, with the former Everton boss dubbed ‘The Chosen One’ after succeeding Ferguson on the departing manager’s own recommendation.

United breezed to a 4-1 win at Swansea on the opening weekend of the 2013/14 season, as the defending champions made light work of their opposition in South Wales, in the club’s first fixture in 26 years without Ferguson at the helm.

Robin van Persie – winner of the Premier League’s Golden Boot the previous season – was the inspiration with a brace, while Danny Welbeck also netted a double in a comfortable away win.

Moyes won just one of his next five games as the wheels came off, however, with the Scot’s reign lasting less than a single season. He was sacked in April with United seventh in the table and guaranteed to record their lowest points tally of the Premier League era, with four games of the season still remaining.

Erik ten Hag might take some consolation from Louis van Gaal’s first fixture in charge, after his experienced compatriot also fell to an opening weekend defeat at Old Trafford.

Van Gaal was the marquee name brought in to revitalise the Red Devils’ faltering fortunes and was backed in the summer transfer market, with the likes of Angel Di Maria, Radamel Falcao and Luke Shaw all arriving.

The Dutchman’s side produced a disappointing performance in their opener, however, as United were beaten at home on the opening day of a league season for the first time since 1972.

Wayne Rooney levelled after Ki Sung-Yeung has opened the scoring for Swansea, who went on to secure a first-ever away win at Manchester United through Gylfi Sigurdsson’s 72nd-minute winner.

United followed the loss to Swansea with disappointing draws against Burnley and QPR, but recovered to finish fourth in the Premier League and secure Champions League qualification.

Van Gaal’s reign lasted two seasons before the Dutchman was unceremoniously removed, with FA Cup success not enough to save his job as the ‘Special One’ arrived in Manchester.

Mourinho’s first summer saw the club spend big on a host of new additions, including breaking the world transfer-record to re-sign Paul Pogba from Juventus.

United opened the season with an impressive performance at Bournemouth, a debut goal from Zlatan Ibrahimovic the highlight of a comfortable win over the Cherries.

We won 3-1 away to Bournemouth earlier this season, with @Ibra_official grabbing a debut @PremierLeague goal… pic.twitter.com/7VbmBCZrFW

Juan Mata and Wayne Rooney had earlier put the Red Devils in control, with Adam Smith’s strike little more than a consolation goal for Bournemouth.

United won each of their first three Premier League fixtures under Mourinho, but struggled to maintain that consistency and ended the campaign in sixth. Consolation was found with major silverware however, as the Red Devils sealed a League Cup and Europa League double.

After the toxicity of the latter end of Mourinho’s reign, the feel-good factor was brought back to United following the appointment of club legend Ole Gunnar Solskjaer as interim manager.

The Norwegian’s tenure began with a 5-1 thrashing of Cardiff in December 2018, with the Red Devils rampant in an encouraging attacking performance that saw Jesse Lingard score twice.

The win in Wales kick-started a 12-game unbeaten run in the Premier League and Solskjaer was appointed manager on a permanent basis in March, having led the side to a remarkable comeback win against Paris Saint-Germain in the Champions League.

His first game after signing a permanent deal ended in a 2-1 win over Watford at Old Trafford, with Marcus Rashford and Anthony Martial on the scoresheet.

Solskjaer’s reign was the longest of the post-Ferguson managers and he became the first to lead the club to consecutive top-three finishes since the Scot’s retirement. However, a lack of tangible silverware and a poor start to the 2021/22 campaign led to his exit, with the Norwegian sacked following a 4-1 defeat at Watford.

Ralf Ragnick was parachuted in following Solskajer’s sacking and handed the reigns on an interim basis until the end of the season.

The German left his role as head of sports and development at Russian club Lokomotiv Moscow to take up the position, having previously held head coach roles at Schalke, Hoffenheim and RB Leipzig.

Rangnick’s reign began with a narrow win over Crystal Palace as Fred’s fine effort proved the match-winner at Old Trafford.

💫 @Fred08Oficial produced a moment of magic during our last #PL outing at Old Trafford…#MUFC pic.twitter.com/5QtKt2w2qV

Rangnick was unable to implement his preferred high-pressing style as United struggled for consistent results across his reign.

Despite an initial plan to move into a consultatory position at the end of the season, he departed to take charge of the Austria national side having overseen United’s worst-ever Premier League campaign.

The Red Devils finished the campaign in sixth to miss out on Champions League qualification, with a Premier League era low of 58 points and zero goal difference.

Erik ten Hag will have been well aware of the task facing him at Manchester United, but even he will have been surprised with the manner of their opening weekend defeat.

The Dutchman’s reign began in disastrous fashion as Brighton secured a 2-1 win at Old Trafford, with Pascal Gross scoring twice for a Seagulls side who more than merited three points.

United were second-best across the opening exchanges and found themselves two goals down at the break, as Graham Potter’s team secured a first-ever away win at United.

The much-maligned ‘McFred’ axis struggled badly against Brighton’s midfield contingent, with 20-year-old Moises Caicedo – once a reported transfer target for the Red Devils – dominant in the engine room.

Ten Hag turned to Cristiano Ronaldo in the second period, but even the introduction of the five-time Ballon d’Or winner failed to lift his side’s performance.

United travel to Brentford next, with immediate improvement required.