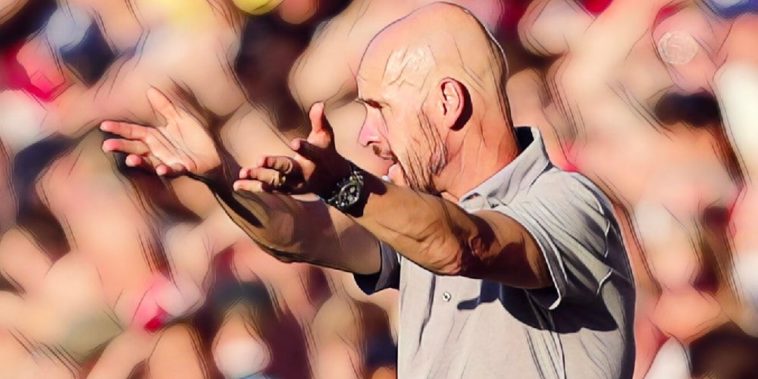 Erik ten Hag said that his side were ‘naive’ as Manchester United were humiliated by a hard-working Brentford side, demanding that his players ‘take responsibility’ on the pitch.

Manchester United got off to the worst possible start last weekend, slipping to a 2-1 loss to Brighton in the Premier League opener, and got off to a terrible start in their second outing.

United came into the game without a win in their last six Premier League away games, and after just nine minutes in West London, they were bullied off the ball in their own half. Josh Dasilva’s relatively tame effort from the edge of the box was totally fluffed by David de Gea, who despite seemingly having two hands on the ball, allowed it to trickle into the back of the net.

Minutes later and United gifted the Bees another goal as they tried to play out from the back, with De Gea’s pass into Christian Eriksen being picked off by Mathias Jenson, who was able to pick his spot and roll it past the Spaniard.

With half an hour gone, things went from bad to worse, Ivan Toney rising highest at the back post at a corner, nodding back across the face of goal, with Ben Mee beating Lisandro Martinez to the ball to make it three.

Four minutes later, Brentford incredibly had another, launching a fine counter attack down the left, with Toney picking out the run of Bryan Mbeumo through the middle, who coolly slotted past De Gea.

Erik ten Hag made three changes at the interval to give his side a bit more physical presence, and while they created a couple of half-chances, they rarely threatened David Raya’s goal on what was a thoroughly miserable afternoon for anyone of a Manchester United persuasion.

Reacting to the humbling, Erik ten Hag said that his players need to ‘take responsibility’ on the pitch

“It’s difficult for me, it’s surprising when you start the game like this,” he told Sky Sports. “In 35 minutes you concede four goals. The team has to take responsibility. I feel really sorry for the fans – they did everything to support us but we let them down.

“The manager is responsible as well. He has the main responsibility and I’ll take that and work on that.”

Having made three changes at half-time – replacing Fred, Luke Shaw and Lisandro Martinez with Scott McTominay, Tyrell Malacia and Raphael Varane – Ten Hag admitted he could have made more changes.

“I changed three, but I could have changed them all,” he said. “We wanted to bring some fresh energy in the game, there was nothing specific to the ones we subbed because I don’t think it’s all to them.”

While he is trying to implement a more pressing style of football, the Dutchman is not averse to going long when needed, and the United boss said his players were ‘naive’ against a side that was intent on putting pressure on the Red Devils’ defence.

Most goals conceded away from home in the Premier League in 2022:

Manchester United have lost seven consecutive away games for the first time since 1936. 🤯 pic.twitter.com/QJBmlEWHIv

“It’s naive, how we played today, you have to play more direct. We said: invite them in [to press] and play long. We attracted them, the space was high on the pitch and we had to choose that option. That’s what we couldn’t do. It’s no good, definitely. That’s not the standard on how we want to act.

“You can have a plan, but we put the plan in the bin. It’s nothing to do with tactical – the first two goals. It’s about dealing with the ball. That’s one. And two, decisions.

“They followed my instructions but they made bad decisions. That’s football, it’s a game of mistakes and we got punished.”

Next up for United, the small matter of a match against last season’s runners up and bitter rivals, Liverpool. Gulp.