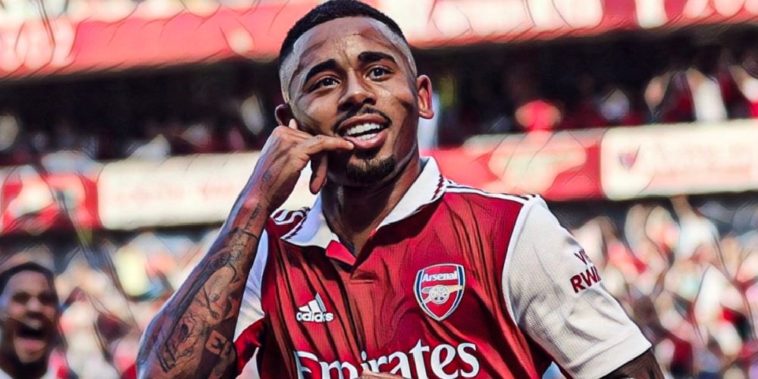 Arsenal continued their perfect start to the season as a Gabriel Jesus brace helped them beat Leicester 4-2 at the Emirates.

Arsenal got their Premier League campaign underway with a 2-0 win over Crystal Palace as they look to improve on their fifth place finish last season, and it was one of their summer signings who gave the Gunners the lead.

Gabriel Jesus has seemed to settle into life at Arsenal really quickly, and after a goal-laden pre-season, the Brazilian officially opened his goalscoring account for the club in superb style. After some tidy interplay down the left, the new number 9 audaciously curled the ball into the far corner from a narrow-angle from inside the area after just 25 minutes.

10 minutes later and the striker doubled his tally, getting on the end of a near-post flick on from a corner to nod home at the far post from close range.

After a superb Premier League debut last weekend, William Saliba unfortunately turned into his own net eight minutes after the break, his backwards header evading the despairing dive of Aaron Ramsdale to give Leicester momentary hope.

However, just two minutes later and the Foxes would gift the Gunners the chance to restore their two goal advantage, with new Leicester number 1 Danny Ward making an absolute mess of a Ben White delivery from the right, dropping the ball into the path of Jesus, who squared it to Granit Xhaka to tuck into an open goal.

Leicester did pull a goal back through James Maddison, the Englishman firing home from a narrow angle, although Ramsdale will likely have been disappointed not to keep his low effort out.

Any hopes that Brendan Rodgers’ side had of staging a late comeback were quickly extinguished though as Gabriel Martinelli fired home from the edge of the area with 15 minutes to play.

Speaking after the game, Arsenal boss Mikel Arteta was understandably delighted with his side’s performance.

“I’m really happy. I think it was a big performance,” he said at his post match press conference. “I think it was a really good football match from both sides. I think Leicester had their moments as well and they did a lot of good things in the game and overall I’m delighted because we got the result that we wanted.”

Gabriel Jesus ended the with two goals and two assists, though Mikel Arteta revealed that the striker was still ‘disappointed’ at not getting more, praising the forward’s ‘mentality’.

“We know what Gabby can do. He scored two and assisted two and he’s still disappointed in the dressing room because he said he could have scored four. That’s the standard, that’s the mentality that if you want to go to a different level you need that mentality.

“I wouldn’t like to play against him. I have never been a defender but I can imagine that they don’t enjoy it. He’s so mobile, so intuitive and is always sharp and proactive to play in any moment and any phase of the game and he’s a real threat.”

Asked about his side’s decision-making in the final third, the Spaniard said it was now at ‘a different level’.

“You can see the interaction and the speed of execution, it’s a different level now. The rotation can be the same and the way that they can execute it at that speed and be that precise is completely different. It’s much more difficult to defend.

“Within that structure, within that shape and within that unit you have the freedom to decide and occupy any space, and they know that and we work on that every day. ”