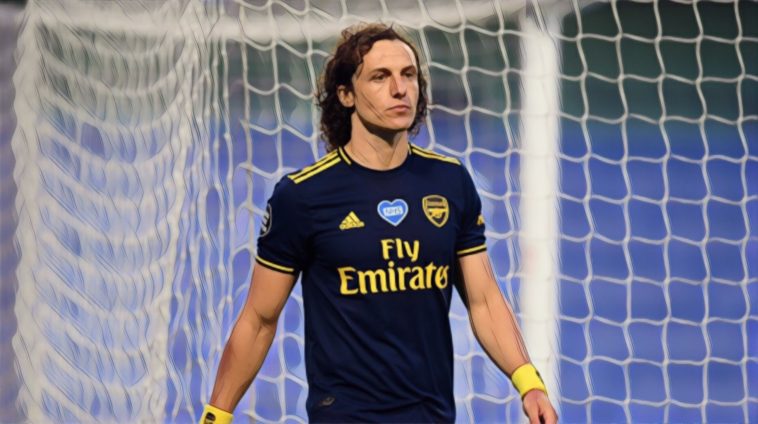 There were plenty of eyebrows raised when Arsenal announced that David Luiz had signed a new deal earlier this week, though he had to accept a ‘significant wage cut’ to extend his stay at the Emirates.

The Brazilian made the headlines for all the wrong reasons following Arsenal‘s Premier League restart, coming on as a first-half substitute for the injured Pablo Mari against Man City, only to produce a typically error-strewn display.

The 33-year-old failed to deal with Kevin de Bruyne’s pass at the end of the first half, the ball bouncing off Luiz’s thigh and into the path of Raheem Sterling, before his miserable evening was capped by a red card early in the second-half following a clumsy challenge in the box.

Speaking after the game, the former Chelsea defender accepted full responsibility for his part in his side’s defeat, though with the club short of options at the back, as well as the Gunners weaker financial position due to the coronavirus, he was handed a new deal earlier this week.

According to the Telegraph, however, the deal he signed saw a ‘significant’ reduction on his previous £120,000-a-week, with Mikel Arteta keen to keep his ‘experience and leadership behind the scenes’.

Luiz won six major honours during his two spells at Stamford Bridge, as well as winning trophies at both Benfica and PSG, and Luiz’s experience is said to be ‘seen as crucial’ with Arteta’s young and inexperienced side.

The report also says the club are keen for Luiz to help with William Saliba’s ‘adaptation’ when he finally makes his long-awaited switch to the Premier League.