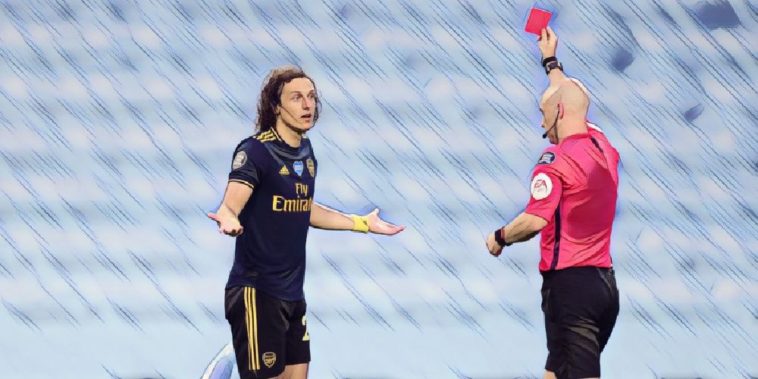 David Luiz has taken responsibility for his horror-show at Manchester City, by accepting ‘fault’ following a disastrous cameo in Arsenal’s 3-0 defeat at the Etihad on Wednesday night.

Arsenal returned to action with a comprehensive defeat at the home of the Premier League champions, but their initial defensive solidity was swiftly undone by a nightmare performance from the Brazilian international.

Luiz started the game as a substitute but was introduced in the first-half following an injury to Pablo Mari, enduring a torrid 25-minute cameo that included a hopeless error for Raheem Sterling’s opening goal, before conceding a penalty – converted by Kevin De Bruyne – and being sent off.

The 33-year-old is out-of-contract this summer and has shouldered the blame for his calamitous display, before offering a cryptic post-match assessment on the uncertainty surrounding his future.

“It was not the team’s fault, it was my fault,” Luiz told Sky Sports.

“I take the decision to play, I should take another decision the last two months but I didn’t.

“Today I think the team did well, especially after they went down to 10 men. The coach is amazing, all the players did amazing, it’s just my fault.”

Asked to clarify his comments Luiz spoke further on his future, suggesting the continued uncertainty may have negatively impacted his performance with his contract set to expire at the end of the month.

“I should have taken a different decision, in the last two months and I didn’t,” he said.

Luiz suggested his future should have been sorted at an earlier date but says he remains happy with life at the club, admitting it was important he acknowledged his role in what proved to be a difficult evening in a rain-soaked Manchester.

“That’s why I said to the players [after the game], “nobody needs to speak”, I need to show my face and be here. So, I want to stay. The coach knows. The coach wants me to stay. We are waiting for the decisions.”

Speaking following the clash, Arsenal boss Mikel Arteta praised Luiz and insisted his nightmare performance will have no impact on his long-term future, though an exit appears the most likely option with just days remaining before the expiry of the defender’s contract.