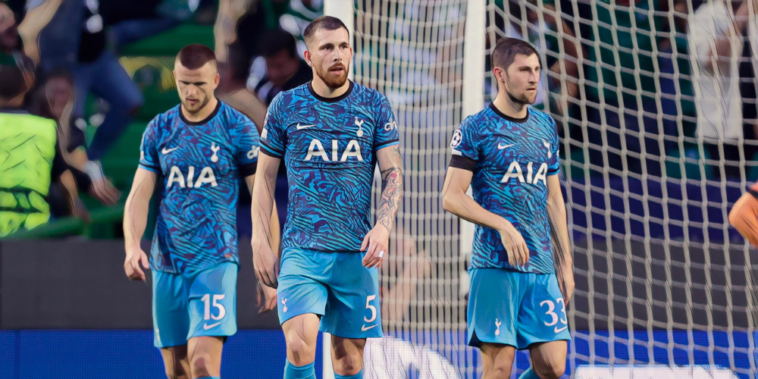 Antonio Conte says Tottenham were ‘imbalanced’ in the second half following the club’s late loss at Sporting Lisbon.

Spurs conceded two stoppage-time goals to fall to a 2-0 Champions League defeat to the Portuguese side, who moved to the top of Group D on six points after back-to-back group stage wins.

Conte’s side were unable to make a breakthrough in Lisbon before Sporting struck twice late on, with Paulinho heading in a 91st-minute opener to break the deadlock before substitute Arthur Gomes netted a second moments later.

Defeat was Spurs’ first in all competitions so far this season and Conte believes his side – who remain second after Eintracht Frankfurt won 1-0 against Marseille in the group’s other fixture – were punished for failing to take their opportunities.

“Difficult result,” he told BT Sport. “For sure when you lose the game you’re not happy. I think that the game was imbalanced in the second half. I think we could’ve scored, and we tried to win the game, and then in the last 10 minutes… we can do much better.

“They scored with a corner and then we conceded the second goal after 90 minutes. I think it’s a pity but it was a difficult game for sure. We tried to get a win but in the end we lost the game.

“When you arrive, you have to try to fill the box and to be accurate. I think we had two or three situations that we can do much better in.

“But now we have to rest and think about the next game in the Premier League.”