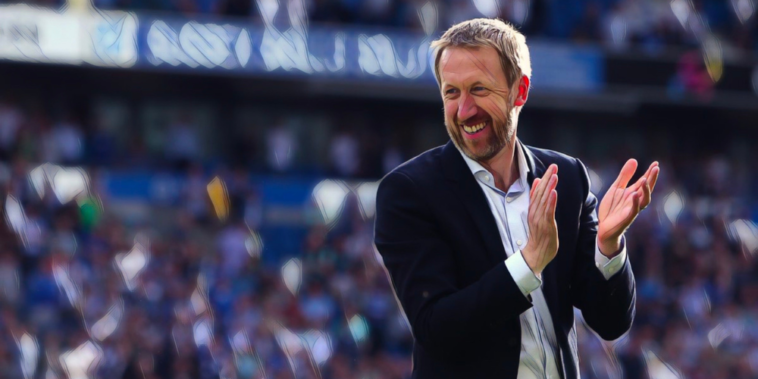 Graham Potter has been named as the new head coach of Chelsea on a five-year contract, with the club’s ownership deciding on change following a mixed start to the season.

Thomas Tuchel’s dismissal caught several by surprise, but Chelsea’s new owners have chosen to make changes in the infancy of their reign at Stamford Bridge.

It’s a sizeable step-up for Potter despite the success of his spell with Brighton, one which saw him win plaudits for an attractive brand of football, progress up the Premier League and tactical flexibility.

Those attributes will all be needed as he looks to become a success in west London and following his appointment we’ve looked at five priorities for Graham Potter at Chelsea.

The early success of Thomas Tuchel’s reign was built on a resolute defensive record, with a water-tight defence behind Chelsea’s run to Champions League success in 2021.

That security provided by the Blues’ backline has evaporated in recent months and Chelsea have looked far more suspect defensively than they previously did. Edouard Mendy’s form in goal has been a concern, while there’s an over-reliance on Thiago Silva to hold together the backline, despite the defender approaching his 38th birthday later this month.

Tuchel was in charge for exactly 100 fixtures as Chelsea boss, the first 50 of which saw the club concede just 24 goals. In his last 50, that figure rose to 53 goals conceded. The departures of Antonio Rudiger and Andreas Christensen left sizeable voids, while N’Golo Kante’s ongoing fitness issues are another unwelcome headache.

100 – Tonight was Thomas Tuchel's 100th match in charge of Chelsea; in his first 50 games they only conceded 24 goals, while in his last 50 they have conceded 53 goals. Breakdown. pic.twitter.com/36VwODedGc

Todd Boehly spent £103m on centre-back talent in Kalidou Koulibaly and Wesley Fofana this summer and the onus will be on Potter to provide the owner with a return on that investment.

Centre-forward has been a problem position for Chelsea in recent seasons, with the likes of Tammy Abraham, Timo Werner and Romelu Lukaku all deemed unsuited to leading the line.

Pierre-Emerick Aubameyang’s arrival on transfer deadline day has provided Chelsea with a recognised centre-forward option, having used Kai Havertz in a false nine position for much of last season. Raheem Sterling has also performed in a central role since arriving from Manchester City during the summer, while Armando Broja will hope for a chance under the new head coach after impressing on loan at Southampton last season.

Tuchel and Aubameyang were reunited for just 59 minutes of football 😬 pic.twitter.com/thRqggMNlN

Potter is no stranger to shortcomings at number nine, with Brighton’s wastefulness around goal often a criticism aimed at his Seagulls side. The 47-year-old opted for Danny Welbeck across the season’s opening weeks, having allowed Neal Maupay to move on to Everton.

Welbeck’s work-rate was valued at the Amex Stadium and Potter will want a forward who can occupy backlines with presence and create openings for the club’s cast of creatives. That could suit Broja who, at 20, is full of power and fresh endeavour.

Chilwell, Cucurella, or both?

Potter will be greeted with a familiar face when he walks through the door at Chelsea, after Marc Cucurella swapped Brighton for Stamford Bridge during the summer.

The left-back was named as Brighton’s Player of the Season during a brilliant debut campaign at the Amex Stadium last term, form which persuaded Chelsea to spend £60m on his services.

Been told Todd Boehly was already well informed on Graham Potter, his ideas, concepts and methods when he decided to sign Cucurella from Brighton this summer 🔵💭 #CFC

Many managers have been offered to CFC but Potter, only priority.

The deal raised eyebrows given the presence of Ben Chilwell at Chelsea, an England international and a footballer who has shone in a wing-back role for the west Londoners despite a long-term injury last season.

Cucurella began the season in favour, before Chilwell came off the bench to turn the game around against West Ham last weekend, scoring one and creating another.

Potter faces a dilemma on which of the duo becomes his first choice at wing-back, though the option of both could appeal to a manager who has prided himself on innovation and tactical fluidity.

Cucurella featured as the left-sided centre-back of a back three on occasion last season and that could be a move Potter follows in order to accommodate both into his plans. It’s a tactic that would provide balance down the Chelsea left and open up the prospect of interchanging runs between the two.

Conor Gallagher’s return to Chelsea has not gone quite as hoped so far, with the midfielder having struggled during the opening weeks of the campaign.

After being part of a Chelsea team ran ragged on his first start at Leeds, he was then sent off on his full home debut after two bookings inside the opening 28 minutes against Leicester.

Chelsea’s two-man midfield pivot has failed to bring the best from Gallagher, who broke into the England squad last season during an impressive loan spell at Crystal Palace. Named as the Eagles’ Player of the Season, he shone as a third-man running from a midfield trio at Selhurst Park.

Will Potter find a tactic that unlocks Gallagher? Or is his possession-dominant brand of football unsuited to a midfielder whose best work often comes off the ball, hassling opposition sides and bursting forward to get into the box.

The 22-year-old – whose pass accuracy is lower than each of Mateo Kovacic, Jorginho, Ruben Loftus-Cheek and N’Golo Kante so far this season – will hope it is the latter, with a World Cup looming in November.

Mason Mount has been Chelsea’s most influential footballer across the past two campaigns, winning the club’s Player of the Season accolade in back-to-back seasons.

Mount’s influence has come despite failing to nail down a regular position, with his adaptability to different tactics often seeing the England midfielder moved around the pitch.

Last season the 23-year-old was one of just three Premier League players – alongside Mohamed Salah and Jarrod Bowen – to reach 10+ for both goals and assists, but has began the new campaign in disappointing form and has so far failed to provide a goal involvement.

Good day at the office. pic.twitter.com/cpLPNbyCeS

Former Chelsea midfielder Gus Poyet was among those to call for Mount to be given a consistent role in the side, issuing his belief that the Cobham graduate performs best in advanced areas of the pitch.

“Mason, in my opinion and respect to the coaches, Mount should have a certain position in the team and should play 90% of the time in that position,” Poyet told Midnite.

“When you have a player like that who plays in different positions, it’s hard for him to play at his best. When Mount plays close to the strikers, close to the box, Chelsea create an enormous number of chances to score goals, when you play him too wide or deep, he’s a different player.”