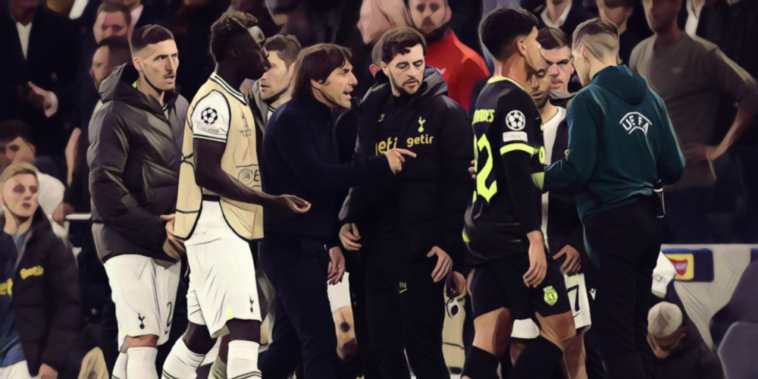 Harry Kane thought he had sealed Spurs’ place in the last 16 after a stoppage-time winner against Sporting Lisbon, though the goal was disallowed for an offside with Conte sent off in the ensuing protests.

Spurs had struggled to make a breakthrough in the game and fell behind when Marcus Edwards opened the scoring against his former side, before Rodrigo Bentancur’s header set up a frantic finish.

A win would have secured progress and Kane’s goal looked to have sent Spurs through, only for his last-gasp effort to be ruled out in chaotic scenes. Conte criticised the decision to send him off after he confronted the match official and insisted that Kane’s goal should have been allowed to stand.

“All the people came on to the pitch and the referee decided to send me off,” Conte said.

“Only for this. I think there are moments you can be intelligent to understand you have disallowed a regular goal because the goal is regular because the ball is in front of Kane and then … VAR.”

Spurs travel to Marseille in the final round of fixtures and need at least a draw to progress, with each of the four teams in a tight Group D still holding a chance of qualification.

Conte bemoaned his side’s bad luck with VAR decisions this season and called for greater consistency from the officials.

…but VAR was having none of it!! 😬#UCL pic.twitter.com/q1Ekz5wvWB

“You know I don’t comment on ref’s decisions but the VAR this season, we are not so lucky,” he said. “Until now we are only the team that has repeated a penalty. And every penalty I go to see if the keeper moves on the line and then I see it a lot of the time.

“I want to see a repeat of penalties in the Premier League … I think they create a big damage. I would like to see if this type of decision made with a top team in an important game.

“I would like to see if the VAR is so brave enough to make an unfair decision. I’m really upset because sometimes you can ask this situation sometimes, I think it’s not good. I don’t see honesty in this type of situation, when I don’t see this I become really upset.”

Conte conceded that his team started slowly in north London, but believes his team did enough to win the game in the closing stages.

“Sporting deserved to stay 1-0 up,” Conte said. “Then the end of the game we deserve to get three points but now [after] the decision we have to wait to the last game.”