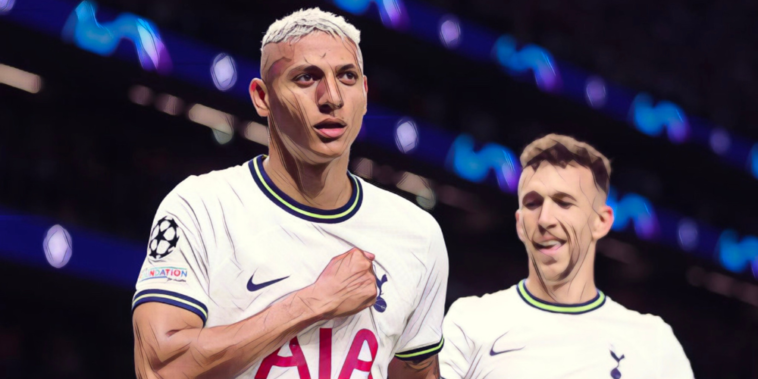 Antonio Conte says he is delighted for Richarlison after the forward marked his Champions League debut with a match-winning double against Marseille.

Richarlison scored his first goals for Tottenham as the club began their Champions League campaign with a 2-0 win in North London.

Spurs had looked set for frustration as Conte’s side struggled to break down the 10-man visitors, who had Chancel Mbemba sent off for a professional foul on Son Heung-min.

Richarlison powered home a header from Ivan Perisic’s delivery to open the scoring however, before another brilliant headed effort secured the win as the Brazilian met Pierre-Emile Hojbjerg’s cross to score a second.

The goals were Richarlison’s first since his £60m summer move from Everton and Conte expressed his delight at the forward’s impact.

“First of all I am happy for Richy because he deserved to have a night like this,” Conte said.

“I remember very well when we signed him he said I can’t wait to play and listen to the Champions League music. Not many words but important words for me.

“Today, this morning I remember him and said ‘Richy I remember what you say, tonight you have this opportunity and chance. Enjoy this moment and try your best’. He did his best and helped us get three points in a difficult game because Marseille is a really good team.

“We signed Richy because we tried to sign a player that was able to play in all three positions. For this reason we hadn’t had any doubts to sign him. We did this quickly because our idea and vision was very clear, especially for this reason.

“Richy is more of striker than Deki (Dejan Kulusevski) but at the same time he can play in Son’s position, in Harry Kane’s position and Deki’s position. For us this is very important because for sure when you make rotation, you don’t drop the quality.”